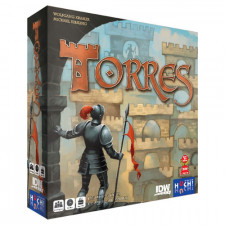 A man climbs a mountain because itâ€™s there, and a Torres player builds a castle of ridiculous proportions because his castle just has to be taller than his neighborâ€™s. One player will start his project of grandeur in the corner of the board, and the guy right next to him just will not be shown up in that way, and heâ€™ll do everything in his power to be bigger and badder.

The winning strategy is always to build big stuff and climb to the top with your army of knights, but there are various strategic and tactical approaches to arrive there. You can start claiming your territory early by spreading out the base of your castle, encroaching on othersâ€™ turf, or you can net some quick and easy points by rubbing elbows with the king in his favorite castle. Some players may try to deploy knights early and ride othersâ€™ coattails to success. Or perhaps you want to draw some cards to give you some sneaky moves, allowing you to potentially pull off a surprising move in the game full of otherwise open information.

Whatever the case, the goal is the same: higher and higher, wider and wider. Thematically, itâ€™s very clean, as every action and move you make will be bent on that overarching purpose, to reach to the skies. There are no illusions of different paths to victory, and there is no attempt to deceive the players into thinking they can gather points as though the game were some kind of Vegas hotel victory point buffet. â€œBuild towers, you big louse!â€ the game shouts as it whips you in the hot Spanish sun. 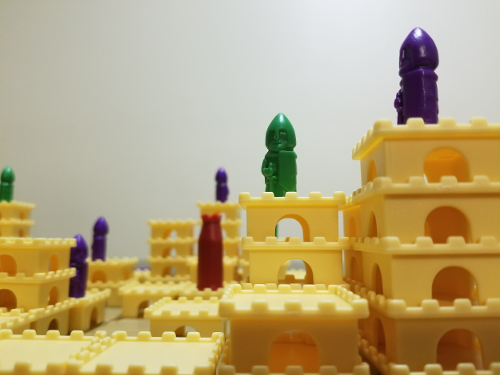 A lesser man would simply not be able to resist a Monty Python quote here, but I value my job.

And so the game goes until you cross the finish line a pleasant sixty minutes later. A nonsensical theme, to be sure. And yet, itâ€™s a fun one, trying to keep up with the Joneses and maybe even steal their castle if youâ€™re a real jerk.

Like most Kramer and Kiesling designs, Torres is of course best played with these kinds of jerks. When the game flatlines into a dull game of one-upmanship, itâ€™s not very much fun. But with the right group, it turns into the cutthroat experience it was designed to be. Itâ€™s also much better with three or four players than it is with two, as the latter configuration often turns into a boring game of passive-aggressively stacking higher and higher instead of pulling off clever moves to bash the leader.

Iâ€™ve not played the entire mask trilogy, but Torres strikes me as possibly the lightest of the bunch. As in many of these designs, Torres players can stare at the board for minutes on end, mind assaulted from all sides with the various possibilities the short list of actions affords them. But really, itâ€™s best played in a very instinctive, tactical manner, seizing opportunities and letting it ride as you climb your way to the top. Of course, if your group likes that kind of min-maxing, you are welcome to knock yourselves out staring into the infinitely branching galaxy of options.

This new edition has a couple niggling production issues, firstly in that the simple grid of squares is inexplicably drawn askew on the mounted board. Itâ€™s done for stylistic purposes no doubt, but Iâ€™d have preferred a straight-up, no-frills grid, because it can mess with your head being just a little bit out of perpendicularity with the edges of the board. Itâ€™s maddening, I tell you. MADDENING. 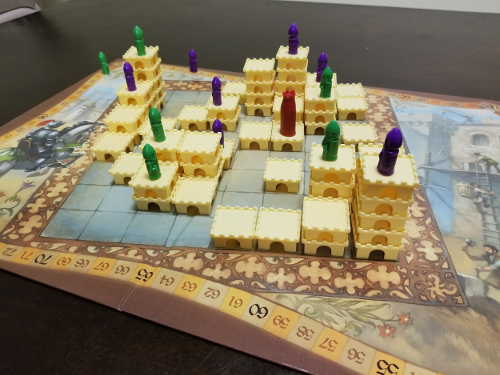 Those with OCD, gaze into the senseless void and despair.

Alright, itâ€™s not that bad and youâ€™ll probably be used to it within a game or two. Perhaps more of an annoyance are the new plastic figures, which donâ€™t have a wide base, and as such tend to fall down, especially when youâ€™re moving your score marker around the board. Since this happens a lot during the game, it can bug.

Still, these flaws donâ€™t drag the game down very much, and Iâ€™d still recommend this edition heartily for new Torres players.

Itâ€™s perhaps worth mentioning that this game won the Spiel des Jahres award just after Tikal and just before Carcassonne, and itâ€™s a game worthy of being listed among those designs. The design provides players with a dead-simple menu of options, and then the design whisks itself away into the night, leaving the players to contend with each other without any nonsense or distraction at all. Torres really does earn its place as an enduring Kramer & Kiesling classic.