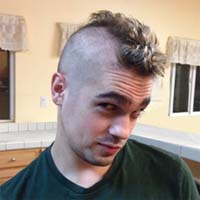 There is no shortage of board games about magic; there's even a popular card game, I've heard, that goes by that very name. Some of them just use magic as an excuse to throw fireballs and krakens around the board, while others, especially recently, get into the nitty-gritty of the spell casting itself. I'm talking about games like Wizard's Academy, Big Book of Madness, and the unsurpassably minute Serpent's Tongue, which replaced mana costs with hand-waving and gibberish recitation. We haven't really seen anything like Trickerion before, though. It is The Prestige to those other games' Illusionist, a game that embraces the delicate clockwork and practiced synchronism that drives the most compelling illusions, a dedication to craft that is, in the end, much more impressive than the bullshit gloss of "real" magic.

Rather than attempt simulate the actual performances, Trickerion focuses on the work that goes on behind the scenes, on training apprentices, researching new illusions, and getting bulk discounts on two-way mirror glass. Yet it also manages to feel like sleight of hand. At its most basic, it's merely a good worker placement title with a fun theme, but as you add in the expansion elements (some packed into the box as an optional module, and some available only in the Dahlgaard's Gifts expansion), as the complexity of the game increases, so too does Trickerion's attunedness to its theme, building into a tour-de-force performance that delivers on all its impossible promises.

Let's start with the merely good basic game. Each player takes the role of an up-and-coming stage magician in the steampunk-tinged Victorian city of Magoria, a haven for illusionists founded by some big-time entertainer named Dahlgaard the Magnificent. Selecting one of four schools of magic (Optical, Mechanical, Spiritual and Escape) as your favored discipline, you receive one starting trick, a few basic materials, a couple of apprentices, and one of three specialists (you can recruit the other two as the game goes on). You also start with a personal magician's workshop board, with side-boards for each specialist, and a personal set of worker discs, trick tokens, assignment cards, and other bric-a-brac. If you like games that are physically too heavy to lift, Trickerion should make you very happy indeed.

The goal (...or is it?) is to accrue the most Fame points over the course of 5 rounds, or weeks, with 2 additional weeks set aside for use with the included Dark Alley expansion module. This is generally accomplished by performing tricks, but that itself is the product of several rounds of intense preparation. If you've played Dungeon Petz or Colosseum, then you've grasped the basic rhythm of the game: jostling for worker placement positions to get the edge while ensuring you're prepared to take part in each of the weekly performances. Sure, performing is technically optional, but particularly in the basic game, if you aren't performing during at least 3 of the 5 rounds, you've already lost. Interestingly, you can perform without actually performing--if you've set up your trick on a certain stage, you get the payoff no matter who is the headlining act for that show. That said, it's always better to be center-stage, especially on the high-profile Sunday shows.

The worker placement mechanic is a clever hybrid of planning and reaction. At the start of the round, you secretly allocate your Assignment cards to your various apprentices, specialists, and your magician himself. These cards decide where that particular worker will spend the round, and they can't be changed after the reveal. Each worker placement location has several possible actions: at the Downtown, you can hire helpers, learn tricks, or make some pocket change; at the Market Row, you can purchase materials required for your tricks or put in orders for new ones; at the Theater, you can perform your tricks on the various stages, or just set up for next week; and at the Workshop, you can prepare tricks (assuming you have the right materials) or make use of your specialists' special abilities.

The big reveal of your Assignments feels suitably thrilling--"Is THIS your card?"--not least because the actual worker placement spots are tight at any player count: there's always room for each player to visit each location (save the Theater) exactly once. Which means that if you and an opponent both revealed two Assignment cards for Downtown, somebody's going to go home crying. Furthermore, not every spot is created equal; the first worker to visit each location gets a big bonus in the form of additional energy. Each action requires a certain expenditure of energy, and the workers themselves also have a base energy value, so that sending your magician to pick up materials gets you a lot farther than sending an apprentice. Even if you don't get blocked out of the space completely, you might end up arriving at the Marketplace too late and find out you're one energy short of ordering the supplies you need. You can always get one—and only one—extra energy by spending a Trickerion Shard, the game's single concession to woo-woo "real" magic, but you will usually want to save these, either for raw Fame points or to power your Magician Powers if using the expansion.

Even after revealing your Assignments, choosing the order to carry them out is still a major decision. What's fantastic about this system is that, while competition can be brutal, you also have perfect knowledge of where your opponents can't go, allowing you to prioritize your moves without feeling like, as a second player, you're always one step behind. And, just as the big reveal is so David Copperfield, you can't make those crucial worker placement decisions without saying the magic words: "For my next trick...."

Like magic itself, the game is baroquely intricate--it would take a review the size of a jetliner to do more than scratch the surface of the rules. Let's leave it at that for now, then, saving some of the mystery for when you actually open the box, and explore those expansion modules that miraculously transform this good worker placement title into a thing of wonder. Packed in the box is the Dark Alleys expansion, which is sort of like the occupation cards in Agricola: after your first learning game, you should never, ever play without it. It adds a new worker placement area, substantially alters your Assignment cards, unlocks a third tier of more complex and rewarding tricks, and expands the game another 2 rounds. As boring as it sounds, these extra 2 rounds might be the best addition, since they give you the space to really feel like you are specializing and exploiting whatever trick engine you've built--they let you play deeply while still keeping every round nail-bitingly tight.

However, Dark Alleys also enhances the game in another important way. Because position-jostling makes it impractical to buy a huge variety of materials and because all the tricks are always available, you typically want to pick 2-3 tricks with similar requirements and stick to performing those for the entire game. This carries the threat of the game becoming repetitive after several plays--there's really nothing to stop you from performing the same set of tricks in every game you play, if you find something that particularly suits you. Dark Alleys injects variety into the experience in several ways. First, it introduce Prophecies, game-altering conditions that last an entire round--for example, all materials cost 2 coins, regardless of quality, or you receive 2 Fame each time you set up an Escape trick. Depending on the mix of Prophecies and the order they come out, they can affect your tactical planning or your entire strategy, potentially nudging you onto a different specialization track altogether.

More importantly, the special Assignment cards available from the Dark Alley spaces give you rule-breaking, one-time-use abilities when you allocate those Assignments, as well as allowing you to slightly alter the layout of your Assignment deck, at least for one round. These special abilities add a lot to the feel of the game; what kinds of magicians would you be if you weren't bending the rules of reality? In further support of this are the character-specific powers the module introduces, making your choice of magician affect more than just your starting trick.

To unlock Trickerion's full potential, however, you'll need to pick up the expansion, Dahlgaard's Gifts. Among various modular upgrades, including a strengthened 2-player variant, this expansion introduces Magician Powers. With these powers, drafted at the start if the game and unlocked gradually as you grow in fame and power, you can perform some truly mind-bending feats—I'm talking Cosmic Encounter-level powers. Of course, it's still nothing more than trickery--not a whiff of "real" magic, thank god--but the best magicians can leave even their peers flabbergasted, an effect this expansion simulates perfectly. It's the perfect capstone to the most dazzling show on Earth.