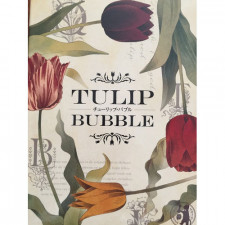 In the 17th century, tulips became all the rage in the former Dutch Republic and huge markets were created overnight. The price of certain tulips went crazy. And not because of any intrinsic worth, but just because people thought they were valuable. Itâ€™s tempting to say, â€œWhat were they thinking?â€ But we need only think back a few decades to when Beanie Babies were hot to know that this impulse still exists.

In Tulip Bubble, the players are trying to capitalize on the tulip market to make the most profit. The goal is to have 120 guilders and no debt. Barring that, the goal is to have the most money when the bubble bursts and tulips suddenly become worthless.

Tulips come in three colors, each with a different market value. Each color also has three varieties â€“ from an everyday common version to a rare and expensive one. At setup, there are ten event cards. One is removed to prevent perfect card counting, and then a â€œBubble Burstsâ€ card is shuffled into the bottom three. When that card is drawn, the game immediately ends. An event is flipped at setup and for each round, so the game will end between seven and nine rounds later. 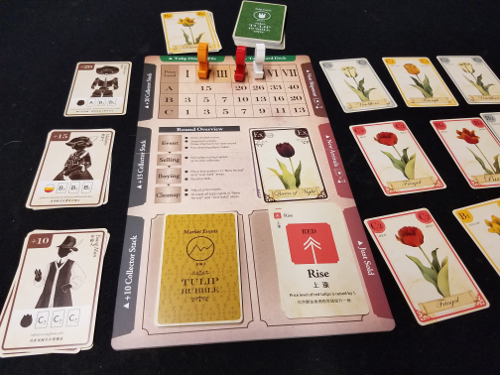 The event adjusts the prices of the tulips. This represents the uncertainty of the market. When their whole value is based on what people consider stylish, their price can shift unpredictably. Sometimes thereâ€™s a surge in a previously unpopular variety; other times yesterdayâ€™s rage comes crashing down. Then, a whole new shipment of tulips arrives for purchase.

Players then bid on tulips. If only one person bids on a tulip, he buys it for the market price. But if two or more bid on it, an auction occurs. The winner gets the tulip, but the losers get the amount bid over the market price. Auctions become tight as an overbid not only hurts you by costing you more, but puts money directly in your opponentsâ€™ pockets.

Players can also buy tulips on credit. This way, they can claim the tulip even without cash on hand. If they sell it later, they have to repay the bank from the sale price. Itâ€™s an interesting mechanic and one that allows for speculation â€“ especially early on when the players can be very cash-poor.

Once tulips are gained, on the next turn they can be sold back to the market for the market price â€“ and hopefully thatâ€™s increased in the meantime. Alternatively, there are several collectors available who want particular colors and types of tulips. If you have the combination of flowers theyâ€™re looking for, you can sell to them for a premium above market price.

Tulip Bubble is an interesting foray into the economic genre in that it is relatively light and easily accessible. Far from heavy stock games with lengthy rule explanations, this title can be explained in just five minutes and played in less than an hour. Plus, the theme and illustrations make it a lot more inviting than games about rail roads or dividends.

Probably the best way to make money during the game is to sell to collectors. They provide a straight up bonus that either provides a windfall or makes up for declining tulip prices. And that means set collection. Because there are only three collectors up at a time (at most), the competition can be fierce for their desired tulips. More than anything else, trying to get that last card to satisfy a collector leads to bidding wars.

Buying tulips on credit is also an interesting mechanism. If you have all your money tied up in tulips, and that perfect card comes along, you can still snap it up. And generally you get it for its current market value â€“ so it really is functionally the same as paying cash. The only difference is that if the tulip market bottoms out, you can sell your cash-purchased flower for a small loss. But youâ€™re stuck with the other tulip until you can pay the debt off.

Helping to keep the game light is the market deck. Since it is randomized, youâ€™re never quite sure what the prices will be from turn to turn. While some players might find that randomness frustrating, itâ€™s not totally out of their control. Each turn, the prices also adjust based on what color tulips are available â€“ and the players can manipulate that market as they buy and sell tulips. That adds significant control back to the players. Plus, as the game goes on, the universe of possible market cards narrows, leading to more finely educated guesses about future prices.

Tulip Bubble succeeds in an effort to create a light and accessible, but still economically driven game. If you like looking at market prices and speculating on future developments, but you arenâ€™t a fan of trains or games that go longer than an hour, then this title is definitely one you should take a look at.