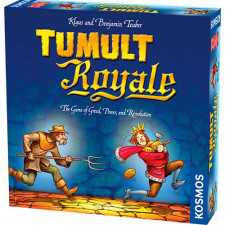 Tumult Royale is a game where you could rough up the box a little, maybe dirty up the components a little, and pass it off to unsuspecting friends as some long lost German game from 1994. It’s old fashioned in a really quite lovely way, if you miss the good old days when Eurogames were all about charm and cleverness and less about austerely converting cubes from one color to another (but at a slightly better rate than your opponents). This is a delightfully silly, frivolous design with just a teeny touch of satire that makes for a fun outing from legendary publisher Kosmos.

Oh, and it’s also designed by a legendary designer. Tumult Royale comes to us from none other than Klaus Teuber, the man who more or less birthed the Westward expansion of the German game design paradigm with Settlers of Catan. Here, he’s working with his son Benjamin and it is definitely case of “like father like son”. You could easily slate this game alongside Adel Verfliptchet, Drunter und Druber or Vernissage as a vintage Teuber design.

It’s also something of a classic German game setting. Each player is a would-be royal lording over a non-specific kingdom. The goal is to tax (the rules say “steal”) resources from the peasantry to erect self-aggrandizing statues throughout the land. But the catch is that you’ve got to sort of play a delicate PR game with your subjects- take too much of their goods, and they’ll rebel, taking back what is rightfully theirs and refusing to support you. Or you might petition them for mercy. The player who manages to build the most statues – or all 25 of their own – wins the game.

Process is simple, and it starts with a spinner. Yep, you read that right. A good old fashioned spinner. Not a “rondel” or a “selection wheel”. A bona fide spinner. So that automatically endeared me to this game from the outset. You spin this wonderful device to determine the will of the people. The result shows how much of each of three commodities types must remain in the peasantry’s hands after the nobles finish with their institutionalized, legally manadated theft.

So that means it’s on to the tax collection part of the turn, which is something like the wild real-time tile-grab in a game of Galaxy Trucker. Using one hand- and with a sand timer applying some fun pressure- players rifle through stacks of commodity tiles looking for the right combinations to build statues on the various types of land depicted on the modular boards. You flip one at a time, either taking it or leaving it for another player to snatch up, and these tiles depict between one to three of the commodity types. After the grabbing of goods, the remaining tiles are checked against the numbers required by the spinner, and if the remnants fall short, there’s a tumult. Whoever took the most of each type is penalized and has to return all but the lowest value tile of that resource and they lose supporters, which are necessary to build extra statues and to move up in the ranks of nobility.

Once all that is sorted, it’s time to build. Much like Settlers of Catan, there is a building requirements schedule requiring players to pay certain combinations of resources based on which terrain type is being built on- and you generally have to build adjacent to where you already have statues unless you want to pay extra to start a new area. If you can’t build anything, the people take pity on you and you get some supporters as compensation. And these are important, because whoever has the most supporters becomes the King or Queen for the next round and gets to put a statue on a “Royal Chronicle” track. But once again, the peasants show pity when you are the player with the least statues (meaning that you are the least greedy of their rulers and you get to flip your mercy card, which forestalls the penalty for causing a tumult.

This is not the deepest, most sophisticated game and it is probably best suited for family or causal play rather than hardcore Eurogamers looking for the next Le Havre. The spinner and the real-time element mean that you’re not going to be investing in long-term strategies or anything like that. But it’s light on its feet, it has just the right scope of rules and choices to make for a pretty engaging way to spend 45 minutes or so. It is somewhat repetitive- there isn’t really any sense of a development curve or progression- but it’s such a breezy, neat little game that you might not even notice.