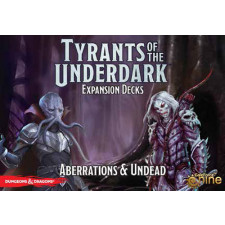 Aberrations and Undead are the first two expansion decks for 2016's Tyrants of the Underdark. This Gale Force Nine/Wizards of the Coast joint production from the designers of Lords of Waterdeep found success, although it didn't quite win me over. I enjoyed the game quite a bit but it felt just one step removed from greatness. Fortunately my appreciation has deepened over time as I've come to realize that it does what it's trying to do extraordinarily well. We don't always need frills and exemplary decor.

This first expansion set is exciting because it serves as the vanguard to future content. It offers a glimpse into how the game will develop and serves as a cognitive appetizer. Unfortunately, a yellow flag was thrown on the play and confusion is sown.

Mechanically, these decks are hot. Brazen new ideas and an injection of furor. Physically? Let's just say this is more Clint Howard than Brad Pitt. The illustrations are up to snuff but the cards themselves are wrought with issues. They don't match the base game in size, color, or feel. They are much thicker and have a glossy protective coating. You can easily identify and separate the two printings by sight and touch. It's a bummer the size of Lolth.

This is a problem that is not too rare in this hobby-expansion components not perfectly matching up with a base game's-but it's still a bit of a prickly thorn. If you've sleeved your cards the issue is minimized, which should be the majority as only a monster wouldn't sleeve a deck-builder. Overall, this is slightly disappointing but it shouldn't throw a substantial wrench into the fun machine. 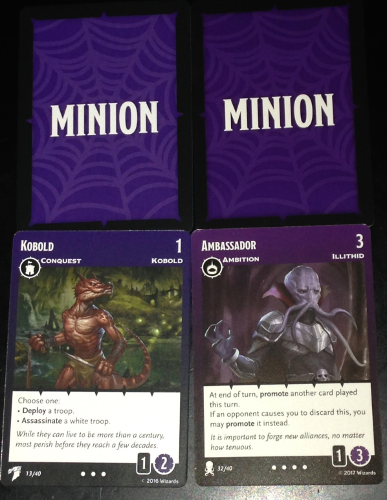 Base game on the left, newcomers on the right.

Let's talk about the good stuff, which is everything else. Both factions are great with a slight nod going towards the Undead. The big shift here is a plethora of abilities which manipulate both the board and stacks of cards in interesting ways. New vectors of strategy open up and combos lay glistening beneath the surface awaiting their day in the sun.

Leading the Undead charge is the mighty Vampire. This effect allows you to promote a card from your discard pile and then gain 1 VP for every 3 cards in your inner circle. Promotion is one of the most satisfying strategies in this game and the Vamp continues to rev that engine. Mummy Lord intertwines with the deceased theme by allowing you to raise white troops from any trophy hall. This is fantastic because it adds supplemental use to some of the weaker, effects in previous decks. It also combines solidly with Ravenous Zombies from this set in that you can place the neutral dudes back on the board and then eat them up.

The low cost undead cards have their day as well. Ghost is a beautiful option that lets you buy the top devoured card as if it was in the market-yeah, very cool. The flexibility of Minotaur Skeleton is suave in that it allows you to deploy three troops or devour itself to assassinate up to three white soldiers. At a measly three cost, that's pretty rad. 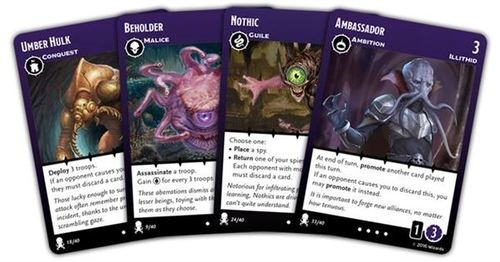 Illithids, Beholders, and Umber Hulks? The Underdarkâ€™s version of the Avengers.

The Aberration deck is no slouch either. This set is focused on causing opponent's to discard as well as countering such aggression. The seven cost Neogi deploys four troops and then forces each enemy to discard a card, for instance. However, if you're holding a Grimlock and discard it then you can immediately draw two cards (As Wayne said, shwing!). The Ambassador can even be promoted if you're forced to discard it which makes it a tasty cheap add to your deck.

Elder Brain is a swollen mass that feasts upon the brains of its illithid supplicants. It also happens to be my favorite card in Tyrants, bar none. You first promote the top card of your deck, then you can play a card from your inner circle as if it were in your hand before returning it. Amazing. Awesomesauce. Fire.

The positive momentum behind these new decks is how they creatively open combinations across the board. They can be paired with one of the original four and clever new twists emerge. Players find excellent maneuvers teased out of happenstance purchases and the excitement is ratcheted up a level. Deckbuilders are all about building sweet engines and the design philosophy behind these additions is completely in line with that.

Unfortunately this first extension for Tyrants of the Underdark is a mixed bag. There's a lot to love in terms of how the individual effects integrate, but the printing issues can be a turn-off. If you can make peace with the issues, I do heavily recommend these two decks as they inject a lively spread of abilities and increase variety.