Tyrants of the Underdark Review

New from Wizards of the Coast and Gale Force Nine is Tyrants of the Underdark. This design is a hybrid deckbuilding game with area control mechanics and a touch of Dudes on a Map interaction. Thereâ€™s some Ascension in its DNA, but also a little El Grande. And it has pedigree as it is designed by the guys that made Lords of Waterdeep, a terrific worker placement game in a different D&D setting. This sounds stupendous on paper â€“ especially set the dank and mysterious underground empire of the Drowâ€“ but itâ€™s a game that feels somewhat dated and it never quite seems to excite, let alone find its own voice. 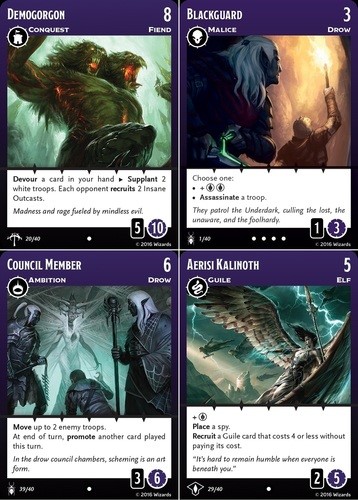 Two to four players each control a rival Drow faction and each starts with the usual seed deck of cards that provide two different resource types. Influence buys cards from a six-slot public market, Power lets you place troops on the board and do some other things like assassinate units on the board that may be blocking your way among the pathways that connect each city or preventing you from claiming a majority in an area. In addition to troops placed by other players, there are also neutrals to impede your domination of Menzoberranzan and its suburbs. Itâ€™s a VP game, and having the most troops in areas nets you the points that each afford at the end of the game with the larger cities also providing resource boosts and bonuses for having total control of every space in them.

So there is already so pretty ho-hum stuff going on in just the top-level pitch. Play all your cards, count up two different resource types, buy cards, place a couple of pieces on the board, reshuffle. The area control concept is pretty straightforward, nothing fancy.

There are, however, a couple of fun concepts that match up nicely with the intrigue and skullduggery that should be expected in the Drow culture. Spies can be placed in areas without geographical restriction (usually you have to have â€œpresenceâ€ to place troops in adjacent spaces) and you might play cards later that let you cash in those spies for influence, murder rivals there, or sway enemy forces over to your side by supplanting them with your own. This is cool stuff, and having an enemy spy in an area may give you pause during your turn- what are they up to?

There is also a promotion mechanic, where some card effects allow you to put a card from your hand into your â€œInner Circleâ€ where it worth more VPs at the end of the game, in exchange for removing it for your deck. This can dramatically alter the valuation of a card in hand, and it provides a great way to ditch high-value cards that have limited or no use as the game goes on. Itâ€™s also another nice touch that speaks to the setting and themes, with players developing a coterie of conspirators. 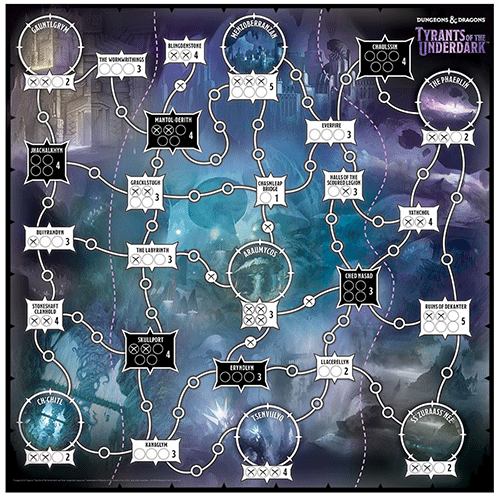 I also like how the set of market cards changes with each game, with four â€œmini-decksâ€ to choose from that each have their own themes and unique mechanics. You pick two of these and shuffle them together so that you come up with different combinations of high value, powerful cards with specific uses or low cost cards that have more universal effects. Thereâ€™s a lot to explore in building your deck and several avenues that you can go to work out combinations and advantages.

Typing this all out, I keep thinking â€œman, this game really seems better than I thoughtâ€. But the fact is that all of that good stuff just doesnâ€™t quite ignite when the core processes feel redundant and even somewhat boring. Ultimately, it is a deckbuilding game and it feels like a â€œsecond generationâ€ one despite the on-board play. It isnâ€™t quite as janky as some of Martin Wallaceâ€™s experiments combining deckbuilding with geographical elements, but it also isnâ€™t nearly as compelling and interesting as A Study in Emerald.

But it is far more accessible than that game, and I think that those looking for something more along the lines of Lords of Waterdeep will be mostly satisfied with Tyrants of the Underdark. Waterdeep was hardly an original design itself, coming across as a very studied and very carefully reduced iteration of the worker placement games that were very popular around its time. And likewise, Tyrants has a very similar kind of measured, on-trend feel to it. But the trend it is on seems like a couple of years in the past at this point. I keep thinking that I would probably have a higher opinion of the game overall if it had come out on the heels of Waterdeep, two or three years ago when some of these design concepts would feel fresher- and before deckbuilding fatigue had set in.