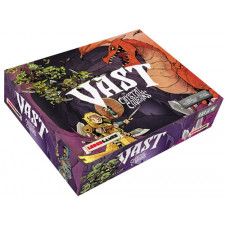 The prospect of asymmetry in board games has always been a tricky one, promising great variety and depth while also threatening to overwhelm its participants with â€” and I believe this is the scientific term â€” a metric butt-ton of rules. Unlike digital games, which might handle calculations behind the scenes or offer helpful tips whenever you get stuck, in the analog world of board games every single rule must be relayed, parsed, and understood between all players at all times. Or at least most of the time.

Not only is Vast: The Crystal Caverns by Leder Games not an exception to this rule, itâ€™s also pretty much the definition. It casts its five players in contrasting roles, then loads them up with entirely different mechanics, goals, and ways of interacting with everybody else at the table.

Itâ€™s also glorious. Did I mention that? I love Vast the way its Dragon loves treasure. Also the Knight. Also the Goblin tribes. I mean, most species enjoy treasure. And as they love their chests of glittering gold, thatâ€™s how much I appreciate Vast.

Okay, so hereâ€™s the skinny. Thereâ€™s this Cave, see. A Cave burdened with terrible intent, because this is a sentient Cave, determined to collapse and murder everyone wandering through its bowels. Probably because having a Dragon living in your gut makes for a terrible case of gastroenteritis.

You can play as this Cave, in which case youâ€™re the one whoâ€™s drawing tiles and guiding the expanding layout of the cavern. Your task is twofold: the aforementioned self-construction of your â€œbody,â€ and a tile-pulling minigame where you try to match symbols drawn from a bag with various actions, like rotating rooms, scaring people with swarms of bats, depositing treasure chests to lure adventurers into remote corners â€” you know, Cave stuff. Expand far enough and youâ€™ll begin to collapse, dooming all those who wander your belly.

Meanwhile, thereâ€™s this Dragon, having slumbered for centuries and destined to awake and terrorize the countryside. The Dragon is playing her own symbol-matching game, using a hand of cards and carefully-hidden gems to move from place to place, snacking on Goblins or hunting down the special chambers that will help wake her up.

The Dragonâ€™s problem is that sheâ€™s on the run from the Knight, whose game is all about leveling up, finding cool weapons, and using them to kill anything standing in between her and her quarry. Unfortunately for the Knight, sheâ€™s on the run from the Goblins, an entire army in need of careful management. These gits have monsters to recruit, ambushes to spring, and traps to deploy, all in pursuit of squishing a single pesky adventurer.

Oh, and thereâ€™s a Thief whoâ€™s trying to make off with the good stuff while everybody else is busy chasing each other in circles. 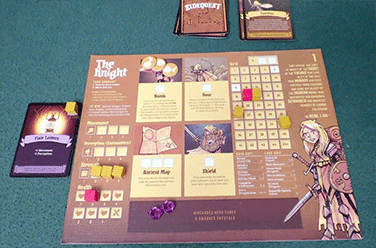 What gives this mess its Pollack-esque beauty is that Vast isnâ€™t merely smug about how varied each of its roles are. It revels in it. It gets down in the mud and squirms with it. Every role interacts with every other role in so many ways that itâ€™s hard to keep track of them, even with a rulebook and five double-sided reference sheets. To say this thingâ€™s got a learning curve is to bend the definition of a curve.

Consider the treasure chests. The Knight wants them because they dish out powerful items. The Goblins want them so they can increase their rage meter, which in turn increases how many cards they get to draw each turn. The Dragon wants them so she can wake up a bit more. And the Thief wants them because dragging a bunch of shiny stuff back to the surface is his whole gig. Logical enough, right? Well, even the Cave wants them, because the more unclaimed treasures there are out there, the more omen tokens it pulls from its bag each turn, so the Cave is constantly squirreling them away in odd corners while everybody else hunts for them. But thatâ€™s not all, because there are also crystals, and dragon gems, and event tokens, and all the other bits and bobs that affect everybody but in different ways. This is asymmetrical gameplay â€” yet interconnected gameplay â€” at its most brilliant.

The whole thing sounds complicated? Well, it is. But here, perhaps this will help. I made this handy chart to illustrate everyoneâ€™s goals: 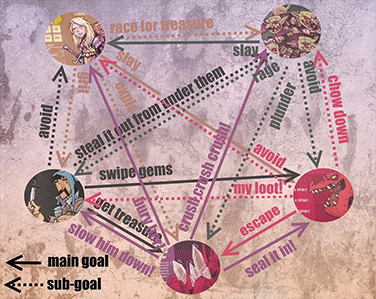 The funny thing is that I made that as a joke to poke fun at just how insanely interconnected the roles are, yet it still sort of helps straighten out whoâ€™s going after who at any given time. Sort of.

Unsurprisingly, the great limitation of Vast is in its frontloading of information. Being able to play your character with any degree of competence represents a big leap in comprehension. Learning how your character interacts with all the other classes is like bouncing around on the moon and calling it a small step. Sometimes your best course of action is to slow someone else down, while at others you should be chasing your goal with all haste. Knowing the difference between those moments is a huge part of the game, and not everybody is going to be willing to devote that sort of energy to a game where the jerk Thief can win because you were too busy paying attention to something else.

All the same, Vast: The Crystal Caverns is one of the smartest games Iâ€™ve ever played, not to mention deep, satisfying, and constantly breathtaking with how it uses such a diverse set of rules to generate moments of tension and release, risk and reward, boundaries and ways to circumvent them. Perhaps the best compliment I could give it is that I could probably play it a hundred times and still discover something new.