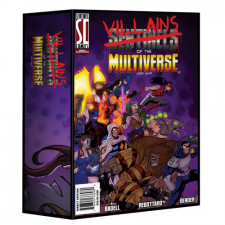 Villains of the Multiverse Review

I think Sentinels of the Multiverse is probably the most inventive and enjoyable superhero card game on the market today. But this expansion isnâ€™t about the heroes that longtime fans have come to know and love. This one is all about the bad guys.

Although the Villains expansion lacks any new heroes, it packs in four new environments and ten new enemies. Rather than individual evil doers, though, Villains allows the heroes to fight teams of bad guys. Expanding on the concept first introduced in Vengeance, players can now select a team of evil from the ten new villains and create any combination they desire.

Villains has a lot going for it. More than previous expansions, it is very straightforward with the â€œloreâ€ or â€œcanonâ€ surrounding the game. We learn that a corporation has attempted to tame Plague Rat for their own ends; the Operative has been brought back to life and is now in service to a new master; and that Ambuscade has assembled his own team of villains to create the Slaughterhouse Six. Villains substantially deepens and explores the world (multiverse?) of Sentinels.

More lore is good and all, but it is the gameplay that makes this expansion so fantastic. One of the keys to enjoyment of Sentinels has always been the amazing variety it provides. And the most significant variable is the villain character. They set the tone of the fight and create the challenges that players must overcome. With Villains, you donâ€™t just get a few new adversaries, you get untold combinations.

Each new adversary also has a distinct feel. The Operative can be a huge pain as she often attacks the weakest hero. Meanwhile Miss Information (yep, sheâ€™s back) punishes players for doing what they do best. And Ambuscade isnâ€™t so bad â€“ but his team is not to be trifled with. In whatever combination you play them, you end up with completely different priorities and goals, leading to wonderfully diverse play experiences.

One of the more interesting aspects is that each villain also comes with an incapacitated power. This must strongly figure in to player strategy. As with heroes, that power will fire on each of their turns. Some villains have powers that are easily absorbed. Others may be even more formidable once they have fallen.

The four environments are no slouches, either. Magmaria is the most interesting. Players can attack and acquire crystals that can then be discarded for sometimes dramatic effects depending on what environment cards are in play. While Magmaria can be punishing, it also opens up possibilities as players who otherwise might have little to do on a turn (due to, say, damage reduction) can pursue alternate goals.

The remaining three environments are also enjoyable. The Court of Blood features a den of vampires and an ongoing vamp vs. hunter motif, not unlike Silver Gulch or The Block. MADAM CARNIVAL is interesting in that it shifts some basic abilities around. But it works best with the right combination of heroes. And The Temple of Zhu Long is a fantastic adventure. Filled with poisoners and ninja who cannot be killed, it is quite reminiscent of a certain adversary of a certain caped crusader.

In order to make this expansion work, each player ends up controlling their own villain. While that is great in theory, it can lead to some logistical problems. One of the complaints about Sentinels is that there is a lot of bookkeeping. Damage modifiers, end of turn actions, damage types, redirection, start of turn actions, etc. There can be a lot to monitor. But, as a cooperative game, you can assign the player best at that to control the villain and environment and it tends to go smoothly. Thatâ€™s not as possible with Villains.

Since each player controls their own villain, they have to monitor all of that villainâ€™s ongoing effects â€“ including those that trigger on other playersâ€™ turns. One player simply cannot keep track of all the cards and effects from four or five different villains. As a result, every player needs to be somewhat adept and keeping track of all the effects.

So if the bookkeeping aspect of Sentinels was a turn-off for you, this will only exacerbate the problem. But if youâ€™ve already developed heuristics for it, or simply have a group practiced enough to handle it, then it shouldnâ€™t be a major issue inhibiting your enjoyment.

And frankly, there is enjoyment aplenty to be had. The Villains paradigm is an exceptional and interesting method of play that greatly enhances strategic options. Kill order can be critical, and your attention is pulled in several competing directions. Further, by its very nature it scales exceptionally well. Sentinels does OK with scaling, though almost all adversaries are easier with more players. But Villains has an exquisite scaling where each new player brings with them an extra villain to fight.

If you enjoy Sentinels (as all rational people should) and donâ€™t mind the requirement that you remember many discrete and interlocking abilities, then Villains is absolutely a must have expansion. Long time players will find a refreshing new experience that enhances and empowers all of the best qualities of the game.