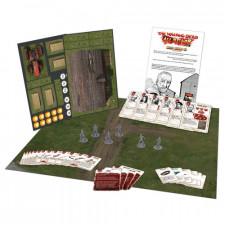 The Walking Dead: All Out War – Miles Behind Us Review

Shane's gone. Atlanta is swimming in rot and it's time to move on. Time to move on to greener pastures, or at least they used to be green before the Apocalypse opened the door. We found safety and it's a rusty tractor, a morally centered patriarch, and a big ol' barn. Don't open the barn.

Miles Behind Us is the narrative continuation of Rick and company leaving their demons behind in Atlanta and cozying up to new ones at the Greene family estate. It's the introduction of iconic characters such as Hershel and his children Maggie, Billy, Shawn, et al. Big Hersh was busy before the end days and likely feeling some pangs of regret as his seven children devour what's left of the food-stores.

In terms of format, this is similar to the previous expansion Days Gone Bye in many respects. It's a series of solo/cooperative scenarios taking you along the narrative beats of the associated comic issues. We have new characters, new equipment (including Hershel's much loved veterinarian's bag), and those juicy scenarios full of story. 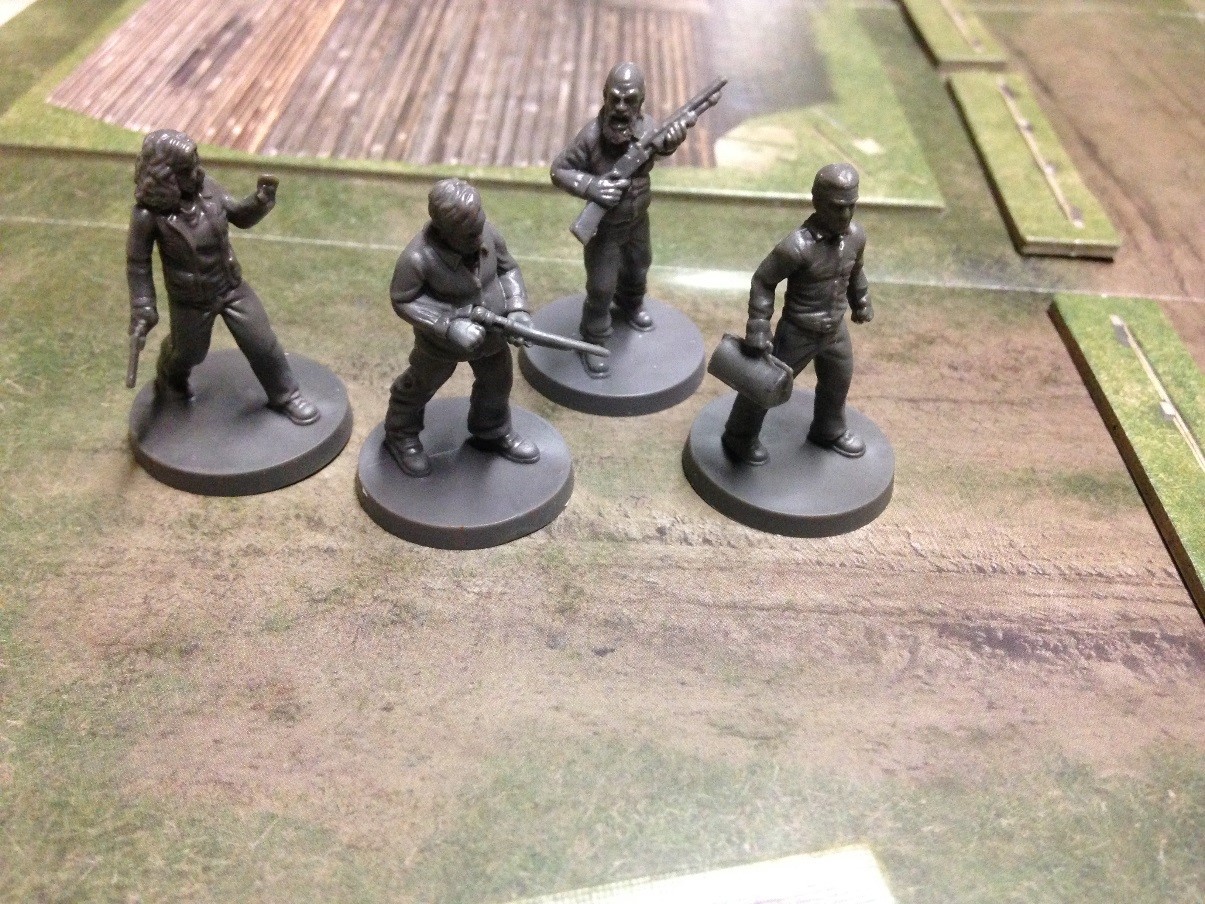 That iconic barn is front and center in this one, featured as a huge 2D scenery punch-out and utilized in several sessions. You'll wield animal catchers as you herd Walkers and toss them into that huge red sin bin. Then later the doors will fly open and all hell will break loose. If you've followed along with the comic series you'll know what's coming, but the system does a fabulous job of producing surprises and excellent bits of story that take things in altogether new directions. It helps that the stakes are higher.

Playing in the format of a campaign is still the way to go. It instills a protective instinct as you work hard to keep your people from turning into Walker food. Losing a limb seriously sucks and those small moments of desperation elevate the tension as the game hits its highest notes.

If you made it through Days Gone Bye with half your group missing limbs and the other half just missing, then you're not out of the woods yet. Miles Behind Us offers a new set of simple campaign rules that allows you to link expansions together into one greater story. The rad part is that this promises to allow you to play through the entire Walking Dead comic series. The downside is that people will die and it will hurt. Not like when your estranged great Aunt Edna who you only talked to once died. No, this will hurt like when you dropped that fresh Whopper and it rolled a couple of feet sponging up all the loose detritus on the carpet. The inventor of the 3-second rule clearly didn't own a pet with hair.

What's particularly neat is how your little band of dudes can progress. If they make it through enough harrowing missions they can actually increase their stats and purchase upgraded dice. It's a simple system really, but one that provides further buy-in to character ownership and builds some muscle behind the eventual punch that's delivered when they die.

If you're mainly in it for head to head competitive bouts, Miles Behind Us is probably not of great use. The main addition is a new set of terrain features, such as the aforementioned tractor and barn, alongside haystacks and fences. It's safe to say these don't modify the experience in a substantial way. They function similarly to barricades and cars but change up a couple of the properties such as being flammable. They're mainly a positive in terms of shifting the visuals of the game and providing variety in that regard. The barn does deserve its due as it cuts the battlefield in a dramatic way and boasts presence. 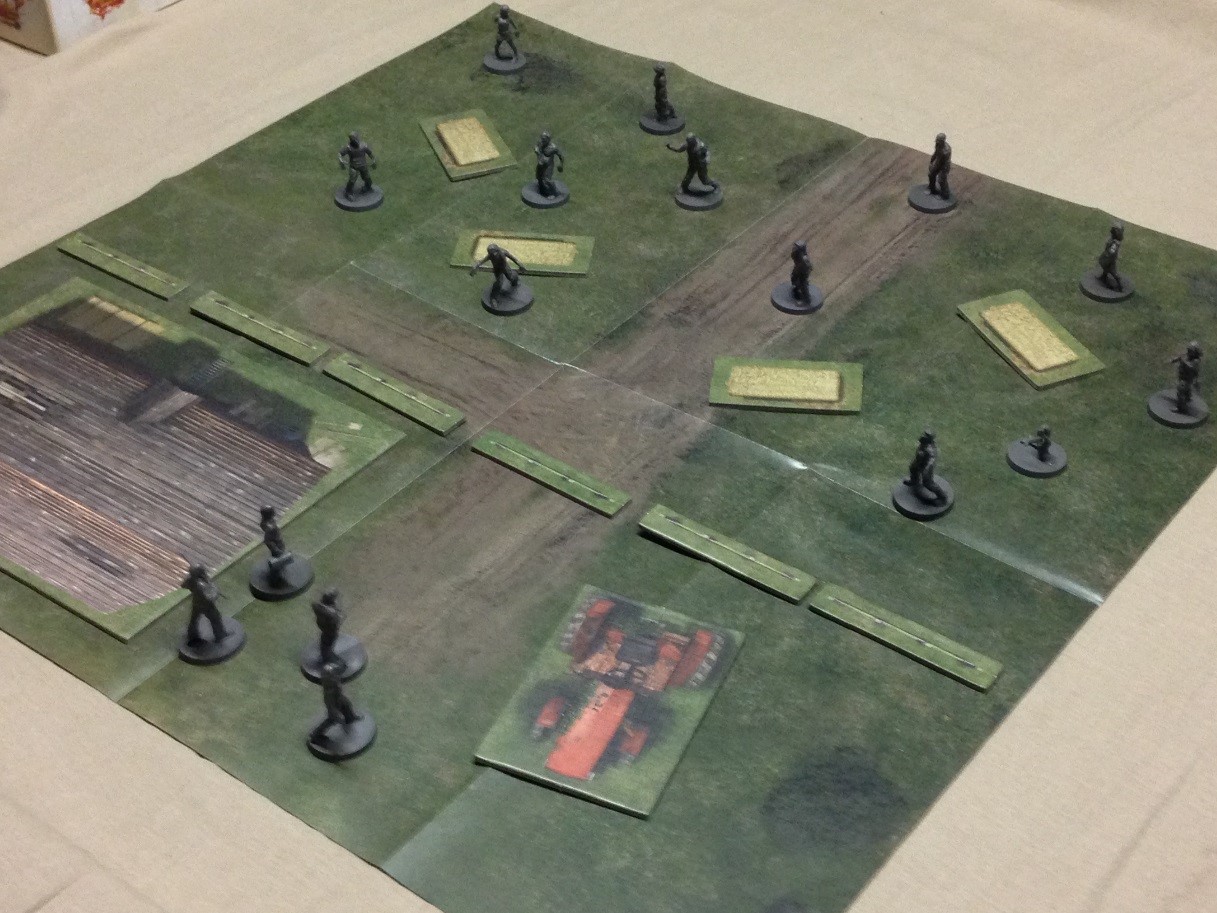 These walkers are GMO free.

The real accomplishment of the current state of Walking Dead: All Out War is the variety in scenario objectives. You're mostly doing the same thing-moving from point A to point B-but the tasks you need to accomplish along the way and elements you need to interact with substantially alter the feel. The game has yet to mail it in or achieve redundancy. This is rather noteworthy when compared to similar miniatures game titles. You’ll push cars out of the way to clear the street, rush a wounded Carl to safety, and herd those damn flesh bags into their rustic prison.

Miles Behind Us walks in lock-step with Days Gone Bye. It offers new challenges and provides a few surprises to keep the drama alive. The All Out War train is still chugging along and firing on all cylinders. That hefty admission can be hard to stomach, but the ride's been absolutely worth it.