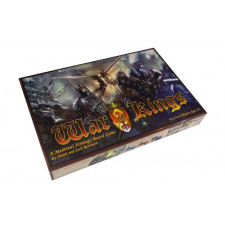 Critical Hits: High replay value, different feel with different number of players, randomness of exploration and Marauder mechanic
Critical Misses: The tally system, while effective, is very cumbersome to use 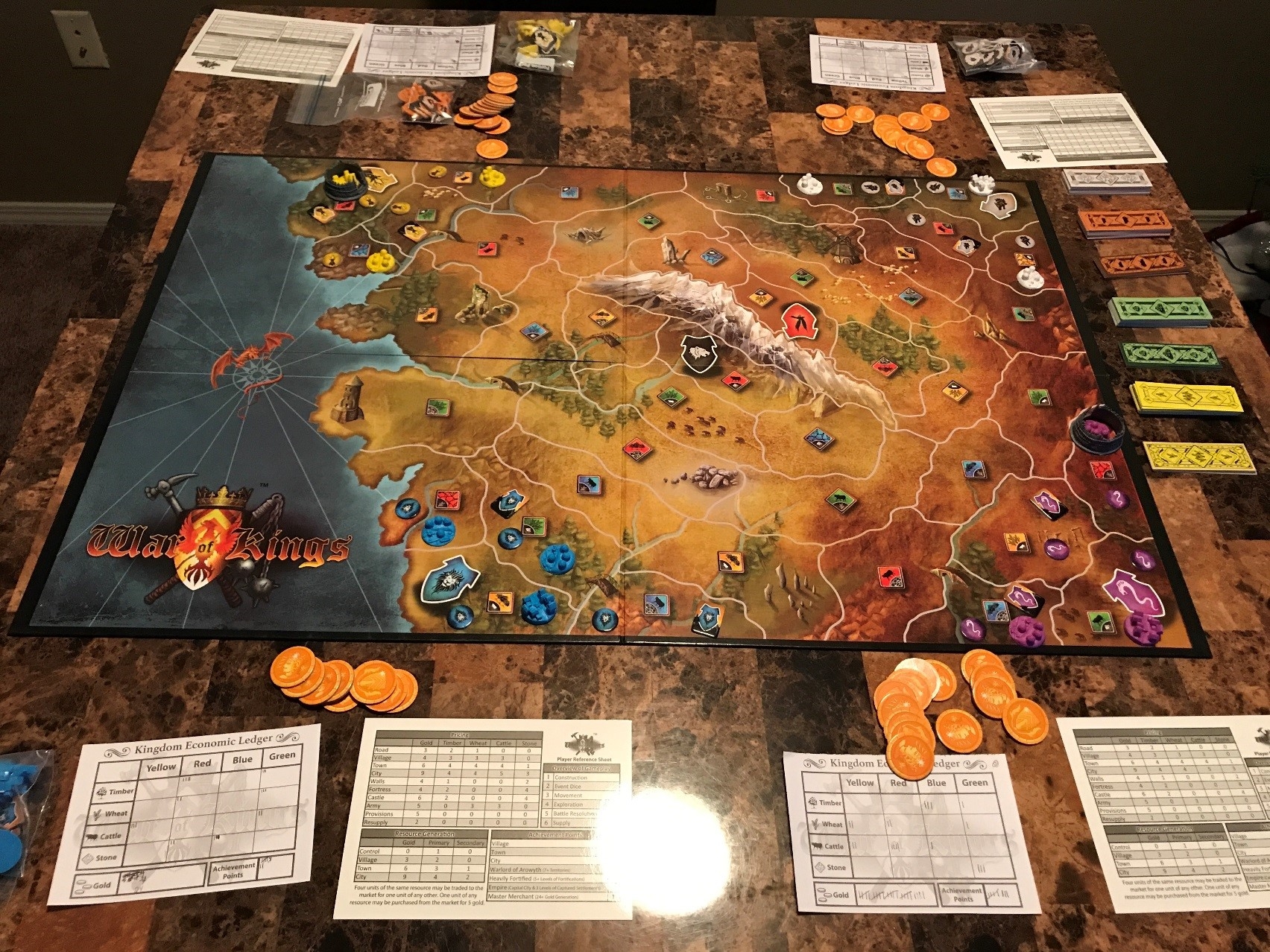 War of Kings is a board game that for many will feel familiar despite some novel touches. You will assume the role of one of six rival kings vying for world domination while attempting to expand your kingdom faster than your opponents. How will you choose to expand your realm? When you first open the game you will likely feel what everyone in my gaming group felt- excited and a bit overwhelmed. The overwhelming feeling will only grow as you make your way through the lengthy rulebook, but rest assured that the actual game play is not overly-complicated. There are a lot of different things going on every turn, and it is going to take some time to grasp them, but once youâ€™ve gone around the table a few times, any remaining confusion will begin to become clear - mainly because you will now be consumed in figuring out how to best achieve victory.

The goal of War of Kings is to earn achievement points. The first player to 13, wins the game. These can be earned in a number of ways, but most commonly will be received by building and upgrading your settlements. There are also a handful of rewards (similar to Catanâ€™s â€œLongest Roadâ€ & â€œLargest Armyâ€ achievements) that can give you an extra boost at the end of the game if you qualify. These rewards are limited though. Only one King may become â€œWarlord of Arowyth,â€ an achievement won by being the player with the most territories at the end of the game.

There are 6 phases to each turn of gameplay: Construction, Event Dice, Movement, Exploration, Battle Resolution, and Supply. You will likely not be performing each of these phases every turn, and are technically only required to perform 2 of them.

In the construction phase, which is the only part of this game all players perform simultaneously, you will generate resources, collect gold, build new settlements or cities, fortify them with walls, and raise armies. These actions are limited by what you can afford, as everything costs gold and some combination of resources. How much of each you get per turn is determined based on how many territories you control, how many settlements you have in those territories (Villages, Towns, or Cities), and a dice roll. With the die being color based, you are guaranteed to get some resources on every phase. This is unlike Catan where you have to hope your number is rolled. This is a big perk of War of Kings. Iâ€™d much rather be getting at least some resources each turn rather than sitting and waiting. Also, strategy will become apparent as to where you wish to build based on the current spread of your resources across the different colors.

The pricing for most items is high, but that requires a greater strategy to be put into place to figure out exactly what will benefit you the most. For example, putting up fortifications of any kind around your settlement is expensive, and you may never have to use them, but getting attacked without them can be extremely costly. My only critical miss for this game is part of this phase: the tally sheet. As your kingdom grows or shrinks, and settlements are upgraded or conquered by other players, your resources and gold you get each turn will change. 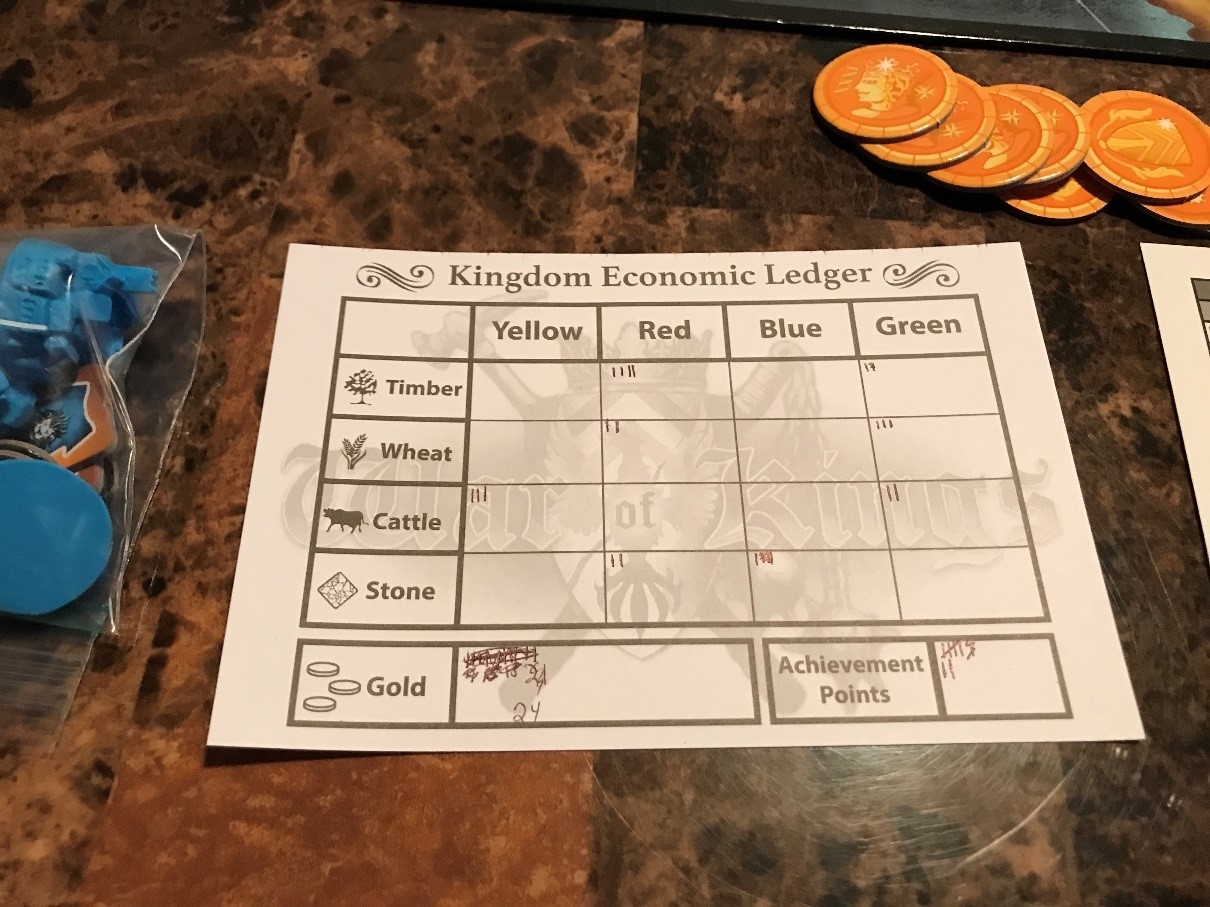 Players keep track of this on a tally sheet that reflects how many of each resource they get during the construction phase depending on what the resource roll shows. The tally sheet is effective in the sense that it gets the job done, but it was also a cumbersome mechanic to the game that pulls you out of the experience to make sure your counts are correct.

The game can be played with many different strategies, which lends to a high replay value since every game is going to go differently. Some players may take an offensive approach and focus on conquering otherâ€™s territories, while others may just focus on growth and expansion of their economy and avoid conflict entirely. The way you play is up to you. In our playthroughs we got a little bit of both styles. No one in our 4-player game was directly targeting other players at first, but as the game progressed tensions rose and some combat ensued.

One final mechanic that was a favorite of mine, but hated by others playing: the Maladorian Marauders, an evil horde controlled by a card-based system that allows the players to control their movement during the Event Dice phase of their turn. Think of the Maladorian Marauders as roaming barbarians, effectively. Where their armies show up is completely random, and they may be discovered while exploring the map leading to unintended combat. They may also have some fortified settlements throughout the gameworld that players can stumble on. What makes this mechanic interesting is that once you know where the marauders are, players get an opportunity to control them during the Event Dice phase if you get to draw from the Marauder Deck. This gives you an opportunity to cause some chaos in Arowyth and try and gain the upper hand while your opponent is dealing with a marauder invasion.

Itâ€™s a cool idea to be able to literally build walls around your city. The board itself looks great, and it adds replay value since there are two different sides to play on, summer and winter, which add different strategies to the gameplay. 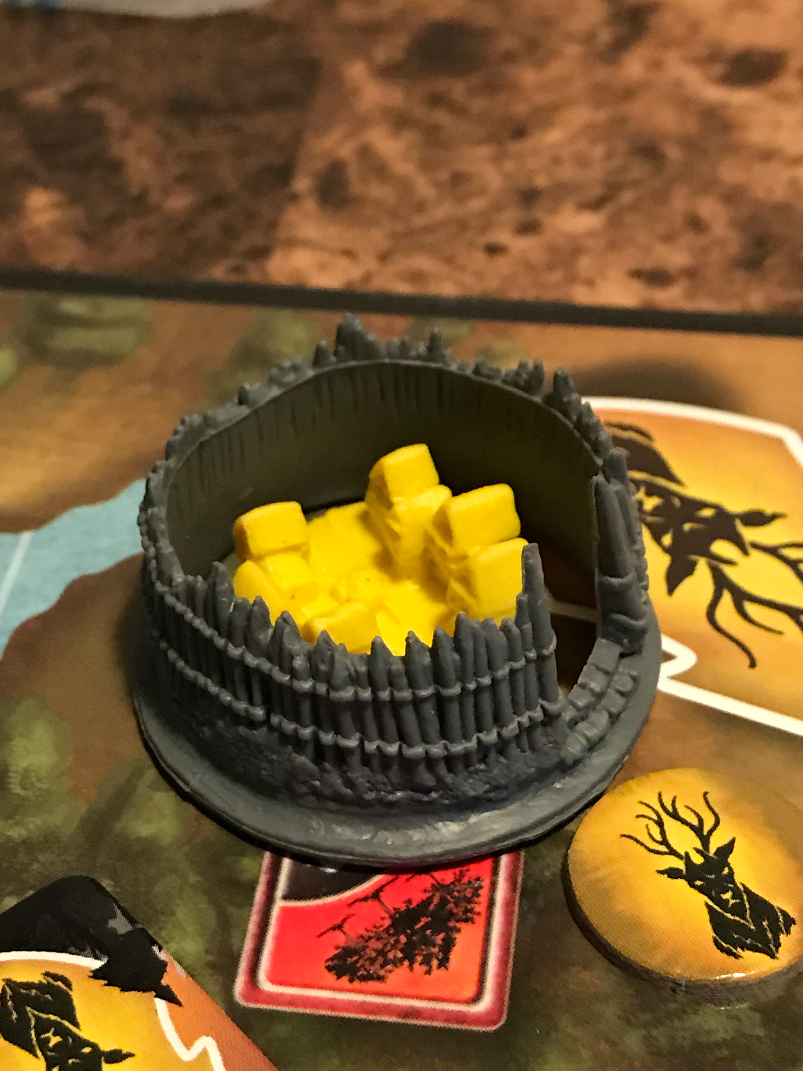 Overall, War of Kings is a resource gathering game with a combat element that is a blast to play. We compared it favorably to Catan, but with combat. Itâ€™s a game that is not very difficult to get into, but will take you many play throughs to master. Itâ€™s replay value is very high, as every game will be a little bit different. Things can change based on the side of the board used and who is playing, but also due to the random elements that come about during the exploration phase of the game. Will your army run into marauders? Will they discover a plague and die? Itâ€™s different every time based on your dice roll. This is probably not a game that will hit the table often, due to its long runtime, but when it does make an appearance it is a lot of fun! The advertised playtime is 120 minutes, which is probably what it would take if everyone knew how to play. It took our group 180 minutes to get through since we were all new players. War of Kings is easy to learn, but takes time to master, and is a lot of fun to play. If your group enjoys resource gathering games like Catan but wants to step it up a notch with combat, then this could be a worthwhile option.