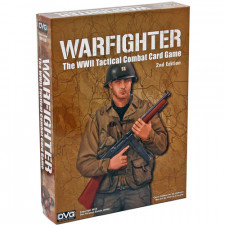 The original Warfighter from Dan Verssen Games got a great review from Michael here on the Review Corner and was generally loved by wargamers and solitaire gamers alike. Praise was heaped generously on the game's simplicity. Despite a daunting rulebook and dozens of keywords to learn, it's actually abstracted enough to be considered a card game, and each enemy and player attack is resolved with a single die roll. It offers rich narrative elements, the strategic freedom of building your special forces unit from the ground up for each objective, and the rarely seen modern combat setting. To quote Michael's review: "One thing really sets Warfighter apart â€“ itâ€™s one of the only games on the market that has a modern Special Forces operations setting." 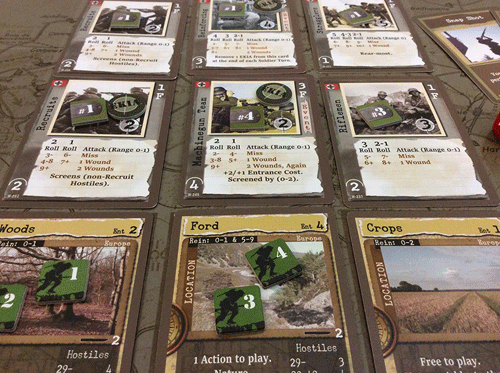 Each location and enemy poses a new challenge.

Hearing this feedback, DVG did the only logical thing: they removed the "one thing" setting the game apart and replaced it with the absurdly popular dead horse that is World War II. A few other mild rule changes accompanied the setting shift, but for all intents and purposes, this is the exact same system with a fresh coat of (olive drab) paint. I'm not a wargamer, but I am an avid solitaire player, so I'll be offering a somewhat different perspective from Michael's review of what's now called Warfighter Modern.

As mentioned above, this is pretty much a card game, with strong similarities to Lord of the Rings LCG and Space Hulk: Death Angel. At the start of each game, you'll pick a mission, which determines how long you have to complete your objective, how far away it is, and how many resources you have to build your teamâ€”these basically exist so you can scale the difficulty, length and complexity of your experience. You'll also pick the objective, which could be something like capturing a bridge (which refills with hostiles every round), clearing out a bunker, or even a Great Escape-style prison break. To reach the objective, players must move through locations and kill or suppress the hostiles they find there.

As a non-wargamer, I was impressed by the simplicity of combat. Each weapon has a chance to hit on a 10-sided die, with especially low rolls meaning you've depleted your ammo and need to spend an action to load a new clip. Some weapons have burst fire modes, which let you roll additional dice, or spray/explosive damage, which count every hit you roll, not just one. Each attack is accompanied by a "defeat cover" roll on a 6-sided-die, which checks against the target's cover value to see if they can duck behind landscape or structures. A success on both rolls kills the enemy, while a success on only one counts as suppressing fire.

Enemy attacks work the same way, with their chances of hitting depending on the number of surviving, non-suppressed targets on the card. If all targets are suppressed, the enemy can't fire back, and their special abilities are dampened. This is a clever system, preventing every encounter from becoming an unrealistic bloodbath and giving some consolation to unlucky rolls (and with the accuracy of these WWII weapons, unlucky is pretty common).

Locations are also abstracted in a smart way. Each player soldier gets a hand of action cards, which enhance actions, give free attacks and moves, or call in supporting fire from snipers and mortar emplacements. Mixed into this deck are the location cards. When entering a new location, you can choose any card in your hand, and you can spend actions to discard/draw to "scout" for better options. This tactical decision has huge consequences, as the terrain determines the number of hostiles, difficulty to move forward, likelihood of enemy reinforcements, and other special rules. Because you have to keep drawing hostiles until their XP value meets or exceeds the location's requirement, entering a new location can be a cakewalk or a FUBAR situation. 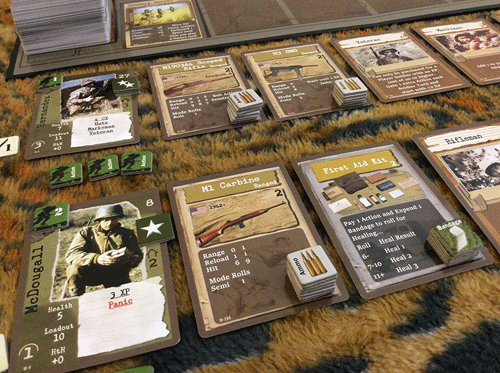 Building and outfitting your team offers an overwhelming amount of strategic freedom.

Like the first Warfighter, though, the most important decisions you'll make happen before the game even starts. Players have complete freedom regarding how they spend their recruitment points. In addition to player soldiers, who must be outfitted from scratch with weapons, gear, and skills, you can bolster your team with non-player soldiers, who generally have lower health but come pre-equipped, and squad soldiers, who function exactly like the hostile cards with a single, abstracted attack roll. It's akin to constructing a deck in a CCG or LCG, and the learning curve is brutal, with no suggested loadouts or strategy tips in the rulebook, but it's incredibly satisfying once you've learned the ropes.

Mechanics like suppressing fire and location movement make this a surprisingly rich, dramatic experience, in spite of the simple mechanics at its core, but there are some problems here, too. First, the board is barely functional, failing to account for the fact that a single location can have a dozen hostiles if things get hairy (there's enough space for maybe three). The swinginess of the card draw is also disappointing: as mentioned, a location can be easy or hellish depending on how many enemies it takes to fill its requirements, and I'm not convinced that the enemies' deadliness is balanced by their XP value (the 0-XP grenadier are straight up evil). Most disappointing, however, is the poorly conceived expansion model for the game, which combines the same country's hostiles and playable characters in one box and dilutes the card variety with repeated equipment that differs only by what country's flag is pictured. The rulebook references cards and mechanics not in the core box, with no clearindication of which expansions include them.

Warfighter WWII is hard, and the frustration of being suddenly overwhelmed by hostiles is only heightened by the unuseable board. However, it's also tactically, strategically, and narratively satisfying. The learning curve is steep, but once you've gotten used to a soldier's life, there's an endless drama in the combinations of locations, hostiles and situations awaiting you on the Western Front.