CT: The launch of Warhammer 40,000 8th edition arrives as wholesale change. Unlike previous editions, players will need entire new rulesets and stat lines for their existing units as the system modifications in the new edition are substantial. Getting those changes into the hands of the community is a challenge, yet it's one Games Workshop was prepared for. They learned a great deal from the misfires of Age of Sigmar early days. This feels like a much more unified release of the five Indexes which include rules for every single 40K miniature Games Workshop manufactures.

MB: There are things in these books that I didn't even know existed! To call these "thorough" is an understatement. Talk about a challenge, can you imagine adapting all of these units to 8th edition, including recasting everything for the new system? The mind reels.

You are right on the money in addressing this as a "unified" release, and I think this was absolutely the right approach to put all of the unit rules out up front and in a relatively no frills presentation. What is really interesting to me in that regard is how these are very much a kind of utility product. Uncharacteristic of GW's books, the fluff is at a minimum. There aren't really many photos. It is all about the unit rules, even more so than in the old codices. 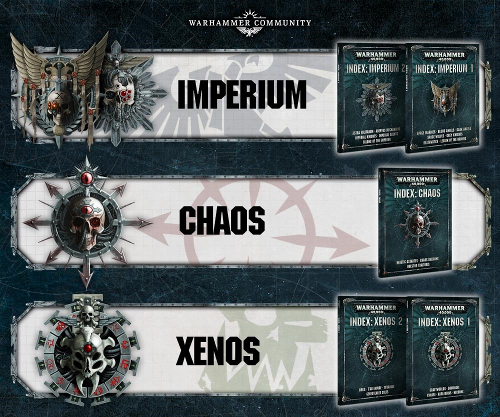 This handy chart shows you which book(s) you need.

CT: That's definitely true. There's some solid artwork and shots of painted minis, but it's much more straightforward than that hard back beauty from Dark Imperium. I get the sense we'll be seeing future books with new units for multiple factions, perhaps presenting all of the units and fluff compiled on a per faction basis. These serve wonderfully as a jumping off point so you can get into the game for a relatively low price, but diehards will want more elaborate products down the line.

MB: Yes, it is important to note that these books are not the new codices. Those are on the way, presumably leading off with a new Space Marine codex in the very near future. These are a reference kind of publications, almost like an info dump of unit data, options, costs, and force organization. They are fairly low cost, which I appreciate, but because of how they are sorted you might have to buy more than one if you have multiple armies across factions. I suppose that's hard to avoid, and that does in some way diminish the value of the book if you just need five or six datasheets out of it- and you really don't even get much to read.

It's not a negative, really, but it is important to understand the utilitarian nature of these books. It's the kind of stuff that long ago was in the back of the main rulebook. Back when it would fit there!

CT: I think the most important element of these indexes is that they're a clear indicator that no one is being left behind. There's a distinct feel that everyone is moving forward together and it's irrelevant whether you play one of the flagship armies or stick to the more obscure. It's easy to make the argument that it was the least they could do, but it's indicative of the philosophy behind the 8th edition release and the magnitude of its impact on consumers as well as Games Workshop.

MB: Sisters of Battle are in, and they haven't had new models in what, 10 years? No army has been "squatted" (other than Squats) and there's no situation like with Tomb Kings or other legacy WHFB armies being functionally abandoned. That's an excellent point that these books are a way to say "we're all in", and hopefully avoid folks burning their miniatures and all of that nonsense.

I am somewhat concerned about the long-term value of these "first edition" books though- will the codices overwrite any of these data scrolls? How long will it be before units or entire factions are determined to be broken or undesirable? It might be some time before all of that becomes evident, but I would advise that these books be regarded as a starting point rather than a standing, permanent resource.

CT: That may be a benefit more than a hindrance, really. For those who have decided to hold onto 7th and resist change, eventually when they commit they may be able to avoid these indices altogether and pick up a current codex for that faction. Much of this is still up in the air from a customer's view point in terms of long term direction. That's kind of exciting as well as scary. 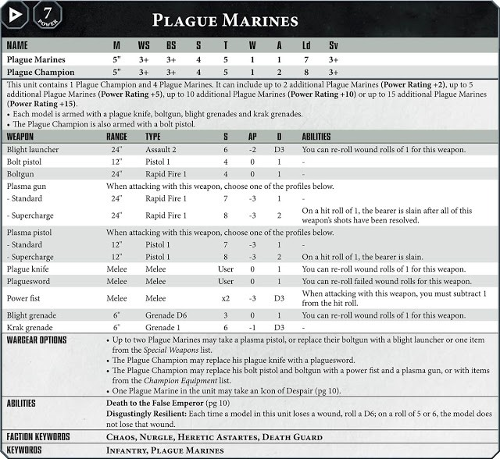 Expect to see lots of data scrolls like this in these books- but don't be scared, 8th edition is really quite simple.

MB: It is exciting and scary because right now, you and I are writing this a week ahead of general release and it feels like a frontier. There's so much potential, I can't imagine anyone wanting to straggle behind in 7th. If you have an army or armies, these books are your clarion call- get in here with everybody else.

CT: Indeed, it's hard to recall a time in Games Workshop's recent history that was full of such excitement and possibility. Even Age of Sigmar, a massive release that diverged from established norm, seems to lag behind 8th edition in terms of potential. We just need to buckle up and take it as it comes.