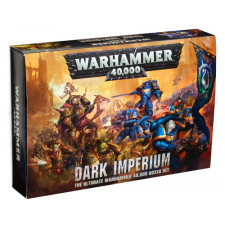 EDITOR'S NOTE- Before Charlie and I dig into the flagship product of Warhammer 40K's 8th edition release I want to make a couple of things clear to our readers. We are not going to even try to go through and enumerate which factions have been buffed and which have been nerfed in 8th edition. We are not going to base our ratings on whether or not this edition makes Tyranids a threat again or if Eldar Scatterbikes have been reigned in. All of these kinds of things are for you to discover and are not often apparent until years into an edition. What we are basing our review scores and comments on is the quality of this product, what it offers to new and veteran players, the value it represents, and the direction it is pushing 40K.

MB: It says it right there on the box - "The Ultimate Warhammer 40K Boxed Set." And by the Emperor, I think it just might be exactly that. I've seen my fair share of 40K boxed sets- going all the way back to second edition- and I don't know that I have ever been so completely and thoroughly impressed with what is on offer. Dark Imperium is just a tremendous package, floor to ceiling. The packaging is almost like an Apple product (albeit with far more explosively baroque illustrations) and I absolutely love that we are getting the full, hardback book in the box- along with 1000-ish point armies for the new Primaris Space Marines and Nurgle Death Guard. The only thing that's missing is a couple of terrain pieces and you'd have what I feel is a very complete game out of the box.

CT: Yes, it's special. The closest comparison I can make is to opening up Kingdom Death: Monster. Both are grand, high end products that intend to wow you upon opening and draw you into their depths long before you ever get the first mini on the table.

I'm generally not a fan of unboxing videos and Dark Imperium is the best example why. When you open this thing up, your jaw goes slack and your eyes wide. It's an experience and one you will enjoy as you leaf through the components and stare agog at those exceptional illustrations. It's all about putting you in the right mood and firing up that imagination. 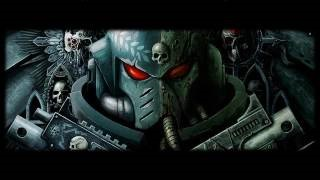 Once the slipcover is off, this grim visage welcomes you into a new edition of 40K

MB: It's a small thing, but I love the drama of opening this box- removing the slip cover, breaking the seal on the sprue box...this is such a different interaction than GW has ever done. Previously, you'd open the box and there'd be a stack of sprues on top of all the cardboard and you'd be a little pissed that the tiny spikes and horns or whatever nicked the book or chipped the cards. In this, the book is secured in the box and it's presented like a main course. I think this release shows the influence of games like Kingdom Death: Monster, creating that sense of "specialness" with the package.

But let's move on to talk about what is in that sprue box. 53 best-in-the-business Citadel miniatures, all of which are completely new sculpts.

CT: How about those Primaris Space Marines? Those guys are damned huge and I can't help but love the new bolt rifles. We have dynamic cool as hell poses and the entire experience of assembly is relatively pleasant. No unsightly seams or gaps, everything just slides together smoothly.

MB: They are monopose, but they are magnificent. I would go so far as to say that nostalgia aside, these are the best Space Marines they've ever made. They finally look as big as you've imagined compared to other races and factions. I've been working on painting these and from a modeling perspective, you won't find easier to handle miniatures at this level of quality anywhere else.

CT: The Death Guard are no slouches either. That Blight Drone is beautiful in its own imperfect and polluted way. I also can't help but fawn over the Lord of Contagion which may be the best miniature in the entire set. I haven't started painting these yet but I imagine the results will be killer.

Plague Marines and a Primaris Hellblaster Squad are just a few of the plastic delights that await.

MB: I'd go with the Blight Drone for best in show. It's such a great looking piece. I've never really considered a Nurgle army and at first I was somewhat disappointed that this set didn't feature a Xeno faction, but these Plague Marines have won me over and now I'm very interested in continuing to collect them.

Now, as for what you do with these miniatures...the whole reason we're talking about this set is the new 8th edition rulebook. There was much speculation, hype, fear and excitement surrounding this release especially since the rocky Age of Sigmar launch back in 2015 that was so controversial. I feel confident in stating that no one but the impossible to please should be worried, because this is 40K "as you like it" - but streamlined and updated for a modern audience. Not "dumbed down" in any way, but very much "smarted up."

CT: Totally agree. All of the changes seem to be focused on playability. The game has a faster, more visceral feel with casualties piling up. The Age of Sigmar inspired morale change helps fuel this and works wonderfully. Additionally, close combat and heavy weapons seem to be buffed quite a bit, allowing for that potent feeling to soak in. Everything has been nudged or adjusted with the specific ideal of improving the experience of play by removing crusty, dated and overwrought elements.

MB: As far as which of those crusty and baroque elements that I'm the MOST glad to see go, it's that antiquated sense of sprawling, disconnected subsystems. The Psychic phase, vehicles, terrain, and morale - everything is unified and in a way that I don't think 40K has ever really been. A lot of complexity is cut away, for example, by adapting the AOS system by which large and extremely powerful units "decay" in effectiveness as they take wounds to 40K vehicles.

So the result is a faster playing game with a smoother flow. You don't have to wrestle the system here- all of the meaningful, desirable complexity is embedded in the unit rules. I mean, everything you really need to know is on a tiny little fold-out card- not in 50 pages of basic rules. I think it was actually quite courageous for GW to strip it down so much knowing how loudly some of the fan base howls at every change.

CT: There's definitely going to be a group, likely sizeable, unhappy with the changes. I'm sure some factions and lists will be thrown out of whack. Additionally, the streamlining of vehicle rules and stripping out of facing reduces some of the simulation elements. I'm all for the changes, but with such a large shift there is a great deal of risk to fracturing the community. The game will move on and the vast majority will eventually adopt the new system, it's simply a matter of time.

MB: But here's the thing. This system is so flexible and GW has been so accommodating of different ways to play (expanding on the open/narrative/matched modes in AOS), I think you'd have to willfully go looking for something to gripe about. This is a system designed with the players and the community in mind. It even has TWO points systems for building armies, one more for the casual player and one for the hardcore list-builder. It's true that the metagame may reveal imbalances or oversights, but looking at this product as it stand today, I think it is one of the best- and most of the moment- 40K products GW has ever released. 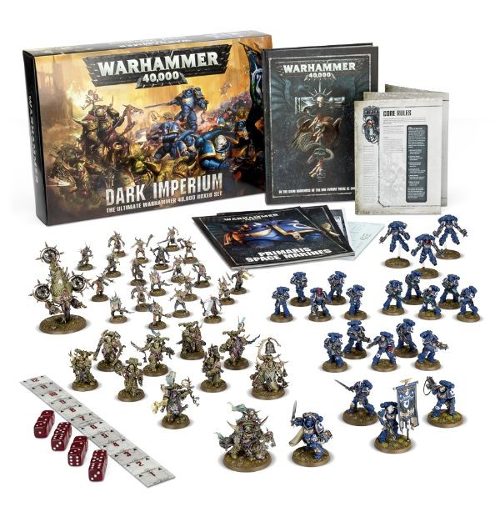 In the grim darkness of the far future, it's gamer Christmas.

CT: It's hard to argue with that sentiment. Even if you have a problem with specific aspects of 8th edition, I think even the loudest of gripers would have to acknowledge Games Workshop's commitment to the community. Particularly when viewed in the light of the past, things have comes a long way.

MB: The bar is raised and there is nowhere to go but up. I've been playing 40K off and on for a few decades and I feel confident in stating that there has never been a better time to get into - or come back to - Warhammer. I can't wait to get out my paints and work on my set some more, let alone play a game with these excellent rules and glorious figures.