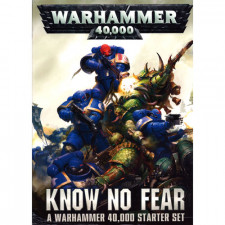 The beleaguered forces of the Imperium have retreated inside the great walls of the planetâ€™s capital city. Theyâ€™ve been fighting for too long, their forces are too depleted to fight much longer. Outside the walls, the forces of Nurgle and the Death Guard spread disease and pestilence everywhere they go. Hope is all but lost when the Primaris Space Marines arrive. These reinforcement forces are bigger, stronger, and faster than your normal Space Marine and they have a chance to turn the tide. This is the story of the Know No Fear starter set, and itâ€™s a fantastic place to enter Warhammer 40k.

There are currently 3 starter sets available to someone looking at Warhammer 40k. Dark Imperium and First Strike have been covered by the writers here already, and Know No Fear sits firmly between them. The models are both more complex and more numerous than in First Strike, but there arenâ€™t as many as in Dark Imperium. More importantly, the rules in this set are designed to teach you how to play this new edition of Warhammer 40k by walking you through a series of 6 scenarios adding rules as you go. Itâ€™s structured a lot like the opening to a video game and itâ€™s a system that works brilliantly. 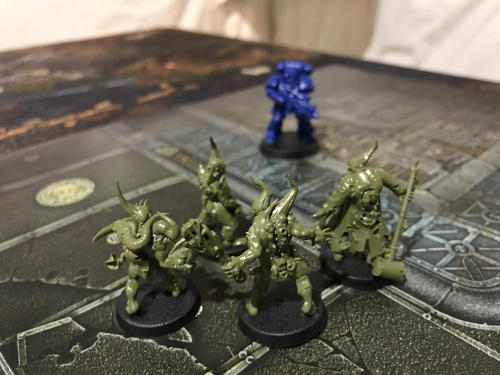 Know No Fearâ€™s missions were not my first steps into 40k, but this new edition is. From what I understand the new edition has been streamlined, cleaned up, and improved. However, that does not mean that the system is simple. Something as simple as shooting something can involve up to 4 rolls: do you hit, does the projectile wound them, do they shrug off that wound, and finally are they so diseased they donâ€™t care that theyâ€™re hurt. There are also a number of different weapon types, special rules, and ways in which movement can affect your actions. The micro-rockets loosed from your Space Marines bolt guns will connect on a roll of 3+, unless theyâ€™re defending against a charge on Overwatch in which case itâ€™s a 6+. Itâ€™s a little complicated. These rules do provide a wonderfully narrative system. Guns feel mechanically different from each other. Epic tales are woven from the sound of dice hitting the table but the rules do provide as much a barrier as the included terrain, a cleverly repurposed part of the packaging. Once youâ€™ve internalized the rules, the game moves along at a brisk clip leaving as much story in its wake as it does bits of dismembered Plague Marines. Separating shooting into 3 or 4 rolls allows for the amazing breadth of weapon types to claim their own space. You donâ€™t have to roll to hit with a Flamethrowerâ€“ itâ€™s hard to miss your target when you belch flame-and Nurgleâ€™s Poxwalker zombies get a bonus roll to ignore damage all together. Getting to that point, where the rules tell stories without getting in the way is the tricky part. This is what makes Know No Fear so great. The 6 missions allow you to live out a story on the table. It begins by teaching you only how to move and shoot; disparate bands of Poxwalkers shamble across the map trying to do nothing but escape, while the Space Marines who stumble upon them try to shoot them down. Across the city, in the next mission, a Primaris Captain shows his might by engaging 10 of those same walkers in melee combat (and teaching you how to charge and assault). Thereâ€™s no need to move onto the next mission until youâ€™re ready and each one features advanced rules you can add when youâ€™re ready. Itâ€™s a grim dark initiation that moves along at your pace. By the time you teleport the fearsome Lord of Contagion onto the battlefield, youâ€™re rattling off the steps of combat like youâ€™ve been playing for years. By structuring the rules the way they do, Know No Fear also reinforces the idea that Warhammer 40k does not have to be played as a war of last man standing. Objectives matter and games can tell stories. If the Space Marine player isnâ€™t careful, heâ€™ll stand smugly over the melted carapace of a Plague Drone only to see a couple insignificant zombies escape off the map to terrorize the populace and spread disease. These little lessons, both overt and subtle, will be useful should you decide to continue the plunge into the Warhammer 40k hobby. 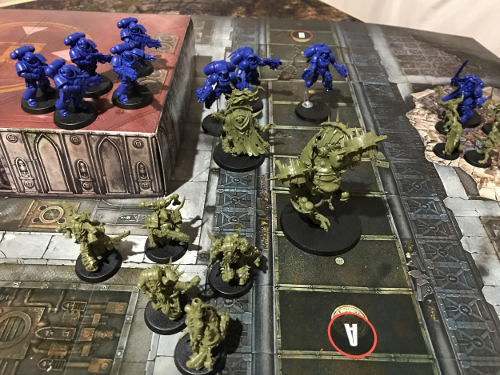 Oh, right the hobby. See, 40k is more than just a game of dice and miniatures. Youâ€™ve got hours of clipping, snipping, and assembling gorgeous (and gorgeously disgusting) miniatures ahead of you and Know No Fear does a good job of easing you into that as well. The minis in this box are of GWâ€™s extremely high standards and there are enough of them included for you to decide if youâ€™re going to enjoy this part of it. There are no easy-mode press fit models here. Youâ€™ll need tools and time to get these assembled. If youâ€™re like me youâ€™ll love bringing the denizens of the 41st Millennium to life under your fingers but if not, at least youâ€™ll know before investing in an entire 2,000 point army. Itâ€™s a great time to get into Warhammer 40k. With 3 starter sets available to choose from, itâ€™s easy to find the set thatâ€™s right for you. Know No Fear is a great option for both new players and experienced players looking to understand the changes to 40kâ€™s complex system. More than that, itâ€™s a chance to ally yourself with one of the great powers of the galaxy: a chance to repel the heralds of pestilence or a chance to breach the walls and spread the sweet release of Nurgleâ€™s decay.