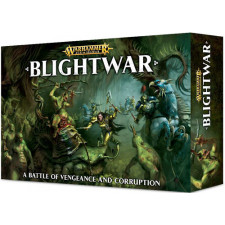 Blightwar is the latest big-box release from Games Workshop, and it is a very smartly positioned product. It functions both as an effective starter set for Age of Sigmar and as an expansion for the first box set, offering all-new Stormcast models but with a warscroll battalion's worth of Nurgle demons rather than more Khorne Bloodbound. And, if you partner either side of this set up with a Start Collecting box, you've got the makings of an impressive army. I was especially happy to get a hold of this set because it sort of caught me up with the great Stormcast units that have come out since the first wave of models were released and also because I've been sort of playing around with getting deeper into Nurgle. Which sounds like a terrible, terrible thing to do, but if you like gloopy, buggy, zombie-ish cretins with unsavory grins better than the Cannibal Corpse aesthetic of Bloodbound I can assure it is a good thing. 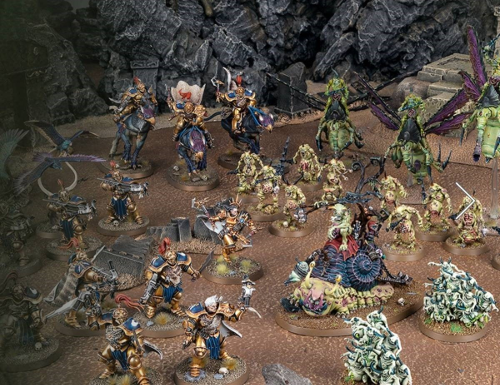 Whether you want to play with noble celestial warriors or pestilential demons, Age of Sigmar has come a long way from its tentative early days as anyone who didn't recklessly dismiss it out of hand will tell you. With the core narrative well established and evolving, Blightwar offers a specific story-driven context for the included armies as well as three battleplans (scenarios) detailing the struggle between Neave Blacktalon's Shadowhammers and Horticulous Slimux's Tallyband of the Befouling Host. So yeah. There's all of that. Wacky names aside, it's a fun piece of story and if you are new to all of this, the included book features enough of a "previously, in the Mortal Realms" section to get you mostly up to speed.

If you're new, you'll also get the complete rules of the game as well as all of the warscrolls you need for every model in the box. Veteran players will enjoy the inclusion of pitched battle profiles (points) and allegiance abilities, which have been especially emphasized with the release of this year's General's Handbook (totally not necessary to enjoy Blightwar). As an added bonus, the set includes a big cardboard dial to use in tracking a Nurgle army's Cycle of Corruption. It's really a fancy way of moving a chart from a page in a book to the table, but it's a nice add and it makes me wish there were more game aids like this available across all of the factions. 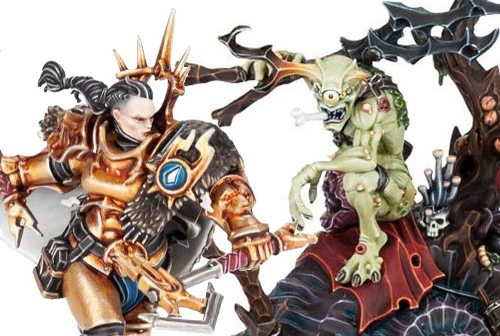 As for the units, the marquee pieces here are new- and exclusive for now- to this set. The golden boys are led by a woman, in fact the first female Stormcast released to date. And she is great. The Knight-Zephyros Neave Blacktalon is a hell of a model- simple, elegantly sculpted, and with lots of animation. She can be modeled with or without the classic Stormcast helm, but I think you are missing out if you hide her long, flowing braid in that golden bucket. She's also a fast and deadly hero-killer armed with a Boltstorm Pistol and Whirlwind Axes. Her Windrider ability allows her to sort of draft when units within 6" use their Ride the Winds Aetheric ability, a 6D6 counts-as-flying move.

Naturally, a key unit included in the set has that ability- Vanguard Palladors. These are the cool looking Gryph-Charger riders that came out a few months ago. Vanguard Hunters and Vanguard Raptors are also included, the former a scout unit and the latter crossbow specialists. And the Raptors also have the aid of their Aetherwings, mystical birds that act as guardians for their melee-weak companions. All considered, these units form the core of a quick-striking, ranger-oriented force somewhat reminiscent of the Old World's Swifthawk Agents.

As for Nurgle's Fecund Rituculturalists, they are led by one of my absolute favorite Age of Sigmar models to date. Horticulous Slimux is sensational. Nurgle's head gardener is said to be the first Plaguebearer, and he rides atop a massive snail called Mulch. This model is a great example not only of the excellence of Citadel's master sculptors working at the top of their game, but also of their heritage of producing outrageously creative and often slightly whimsical (if I may) characters. Indeed, Horticulous calls to mind the more humorous side of Games Workshop that those of us who have been around before the Grimdark settled in might remember. There's an almost Alice in Wonderland quality to the figure, and fun touches like a bound Nurgling dangling in front of Mulch to entice him forward add so much life to it. He's a fun figure to play with too, attacking with massive lopping shears, offering a healing effect to nearby units, and leaving a lovely mortal-wounding slime trail when he retreats.

The rest of the Nurgle set is somewhat disappointing, to be honest. They are older models, which isn't to say that they are subpar or bad, but they lack the excitement of Horticulous or the recent Stormcast releases. You get a pack of ten vintage Plaguebearers, who do what they've always done, as well as three Plague Drones and three Nurgling. And with summoning such a powerful element of Age of Sigmar, the fact that Horticulous is not a Chaos Wizard and he's accompanied by four summon-able units seems like something of an oversight.

I'm also sort of disappointed to some extent that there isn't any kind of scenery. Even the new, midrange boxes have been including simple terrain by way of repurposing the box itself. I have plenty of terrain in my collection, but for those who are coming into this new be aware that you might be breaking out the Legos or stacking up books until you can get a hold of some pieces. I miss the days of the GW boxes that would include a couple of small, rudimentary pieces of terrain that were at least enough to get you going

Regardless, having played with just the pieces in this box and just the scenarios I think most gamers will be satisfied with what is included because it is a great game and this box is literally packed to the top with great pieces to play it with. I especially appreciate that this box set has a range of value depending on where you are with Age of Sigmar, from just starting out to checking out a new army to add to your collection.