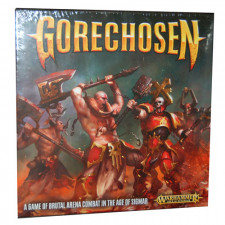 CHAOS AND BLOOD ARE THE ONLY THING KHORNE DESIRES. THE GORECHOSEN STAND READY TO DELIVER â€“ sorry. Gorechosen feels like a game designed with caps lock on, but Iâ€™ll spare you the extended metaphor. Just know that everything in this gory and bombastic game from Games Workshop punches like a charging bull; a bull wearing spiked armor and being ridden by a 10â€™ demon swinging a weapon called a â€œSkullgorgerâ€.

Khorne is Warhammerâ€™s God of Chaos and the Gorechosen are his ultimate champions. Itâ€™s fitting then that this game embraces chaos and chance in the way it does. Everything from turn order to death comes on the bloody wings of fate and youâ€™ll revel in the drama and story that comes with them. Itâ€™s a game of combat set in an in arena in the deepest, most murderous pits of hell and features the brutality to match. 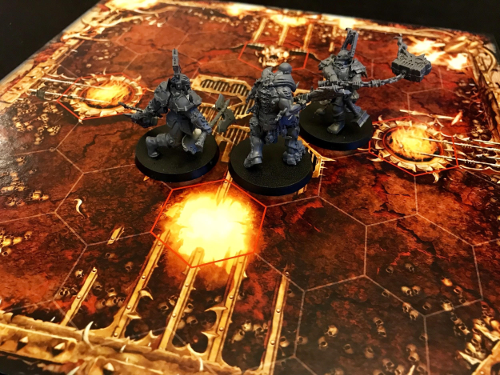 A violent affair. Watch out for those flaming pits.

Each Gorechosen champion is unique and their abilities reflect their chosen weapons. Kore Hammerskull swings a mighty flaming axe at end of a chain and so his kill zone is wide and more effective at a slight distance. Burning some of your action cards before an attack with an ability called â€œBuild Momentumâ€ that makes that hammer punch even harder. Heldrax Gorechosen opts to swing his axe in a massive vertical chop. His kill zone is smaller, but any time you roll more than a single 6 in your pool of dice you gravely injure your opponent and can rapidly accelerate their gruesome march to death.

That march to death may be my favorite thing in a box full of amazing gameplay decisions. All fighters have a Health Track that runs along the side of their character card. When your health marker reaches the bottom, you place a permanent injury token in the top-most empty space and reset the marker to the one underneath it. Then you draw a macabre Critical Injury card that can do anything from weaken your attacks to remove your head in the only instant-death player elimination mechanic Iâ€™ve ever laughed at. This track system is brilliant because it punctuates your 36 HP or so with these dramatic effects in an escalating manner.

Wounds build with every hammer blow and eventually even these might champions are brought, bellowing and broken, to their knees. Those moments where you roll like Khorne himself has blessed you and watch someone burn through 3 or 4 stages of that track are the moments stories are made of. And when your opponent realizes that youâ€™re standing next to a pit and kicks you into it, setting you afire and killing your championâ€¦thatâ€™s Chapter 2.

Player Elimination isnâ€™t always fun and I think thatâ€™s where people will take issue with Gorechosen, if they do so at all. Like everywhere else in the game, no punches are pulled. Being kicked into a pit can end you at full health, and that Headshot card lurks in the critical hit deck just waiting to force someone to roll a few dice. You arenâ€™t completely out of the game but youâ€™re reduced to limited impact. A single roll of the die on each of your turns determines where you do nothing or a little damage, but itâ€™s again in Khorneâ€™s hands. The drama here is excellent â€“ a battered and bloody fighter rises from the ground to punch his fiercest rival one last time â€“ but an early elimination never feels good. That being said, I donâ€™t care. Itâ€™s perfectly fitting for a game like Gorechosen and Iâ€™m happy to embrace my role as a lurking nuisance. 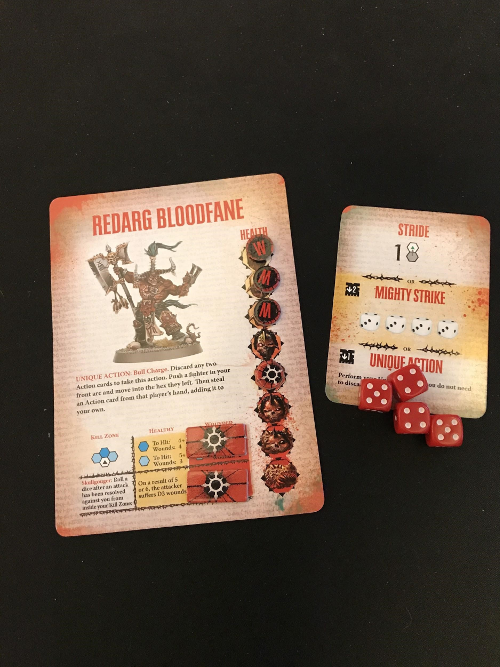 Hello Chaos my old friend. Iâ€™ve come to dance with you again.

Early elimination also isnâ€™t very likely. Itâ€™s technically possible, but the things that can do it can be avoided through good tactical play or arenâ€™t likely to happen until youâ€™re near death anyway. That brilliant health track also ties into how likely you are to be Decapitated, and a good player is going to avoid standing near a pit when theyâ€™re out of cards. While luck infuses every single aspect of Gorechosen, it never feels dominant. Even your hand of action cards features built in mitigation. Each card has three choices on â€“ movement, attack, and special ability â€“ so youâ€™ve always got a solid few options and ways out of tricky situations. They both create and exploit combat situations and the special abilities give you more control where you otherwise would lack it.

Player turn order and number of actions per round is determined by a resource called Wrath. The more of your blood that soaks the ground, the higher it goes and the more chances you get to act. That resource is also lost when you perform powerful attacks. It acts as a self-balancing mechanism. It also gives you that control that you lust over when youâ€™re rolling this many dice. Many of these cards have defensive abilities you can hoard if youâ€™re facing a hell-demon with giant axe, and others let you use your precious action to invest in Wrath for the next round.

Gorechosen isnâ€™t a game you play, itâ€™s a game you ride like lightning bursting from the mouth of a volcano that spews lava-lightning. Turns are fast and tactical, punctuated with the one-of-a-kind sound of dice rattling home on the table. The smartest and most powerful of the Gorechosen will usually win the day, but they worship a god of Chaos and Pain. Come prepared for that.