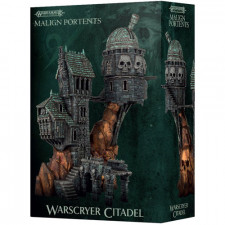 Formerly released some time ago as the Skullvane Manse, one of Citadel's largest - and most skull-laden - pieces of terrain is back in production for Age of Sigmar's Malign Portents release. Rechristened the Warscryer Citadel, this is a big kit that will make for a great centerpiece on many a table, and even with a semi-competent paint job it's going to look impressive. I've been hoping to get a hold of one of these kits for years but the aftermarket prices put me off, so it's great that you can pick up this gnarly piece of LOS blockage for less than $100 here at Miniature Market. 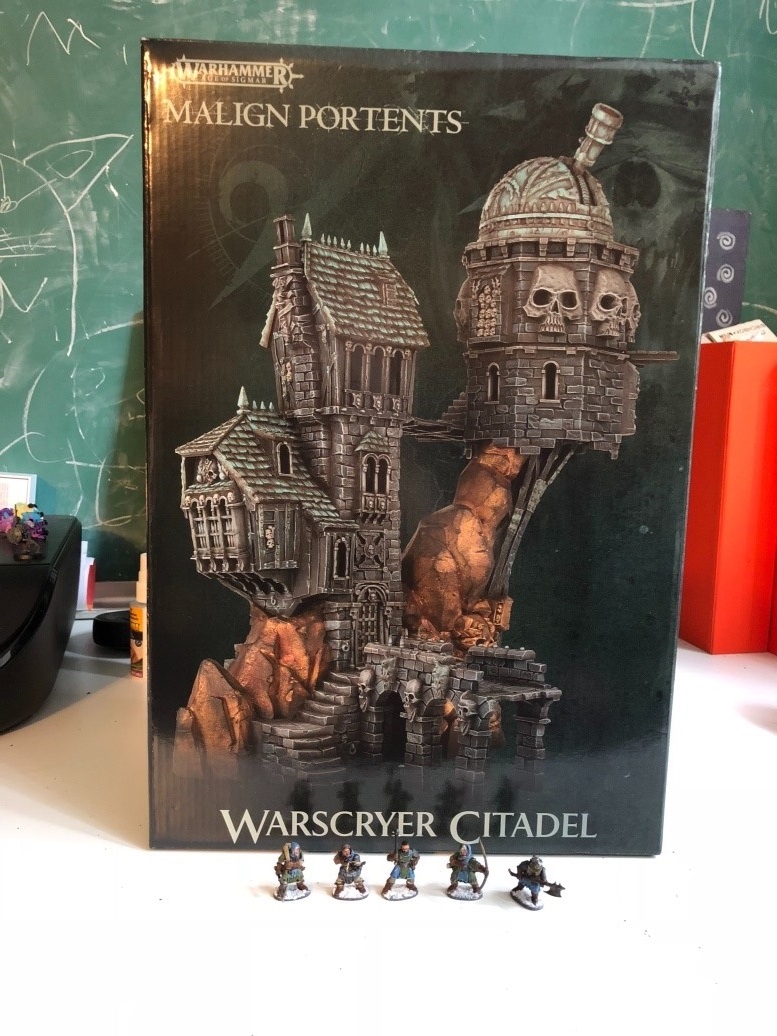 It's a really, really big box.

It comes in a huge box, so you're going to be excited before you even get to the sprues. Once inside, the main body of the Citadel is in two halves with a couple of large-sized sprues for the more detailed pieces. Less experienced modelers and those new to Warhammer should be advised that this kit doesn't have the butter-smooth, seamless fit of modern kits. In fact, some elements are downright ornery to get together and nothing seems to be completely flush. Be prepared with a hobby knife, a file, and Green Stuff if you want to get a better fit for its parts. There is also one sub-assembly - the Citadel's turret - that is actually much harder to deal with if you follow the crummy, too-dark Xeroxed instructions. The protip there is to assemble the top of it first, then build the walls around it.

It isn't that the kit is overly complicated; it definitely isn't. The problem is that these older Citadel terrain kits historically have had issues with quality, particularly in light of the kinds of models the company is doing these days. It's a shame that the sprues couldn't have been updated, but that would have likely required retooling molds and I doubt that GW would see the cost logic in doing so. 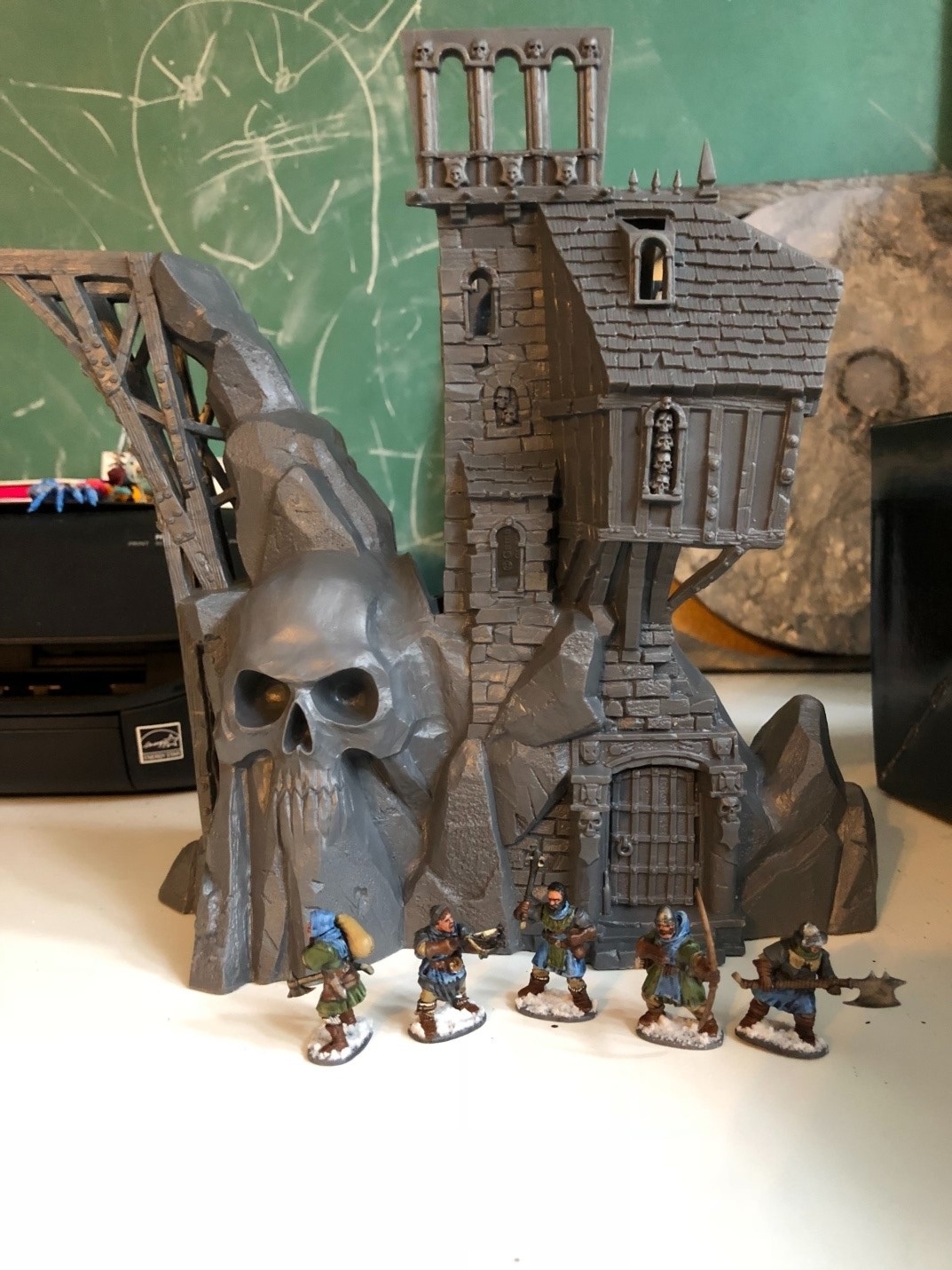 Two big pieces make up the main body of the model.

As for the mold itself, it's a really neat look but it is also Citadel at their most skull-sy. Make no mistake, this thing is ridiculously skull-rich. There are skulls on top of skulls. If there were a nook or cranny, the sculptor stuck a skull in there. I like the uber-baroque look, but it does get a little silly here. But overall, it's a really neat concept, with a couple of towers jutting out of a large, sculpted rock formation. The remains of a bridge stick out of one side, giving a little playable area. Wooden walkways connect the towers, and on top of the main one you can choose to put an observatory dome or crenelated walls.

It should also be noted that this kit is scaled to the old Warhammer Fantasy Battle models. This means that Stormcast Eternals and other more recent models are going to look bigger compared to the Warscryer Citadel than their predecessors. Some may notice the difference, and in fact terrain is often not quite in scale. But be advised that it looks more correct with true 28mm figures than "heroic" 28mm ones. It stands around 15 inches tall fully assembled. 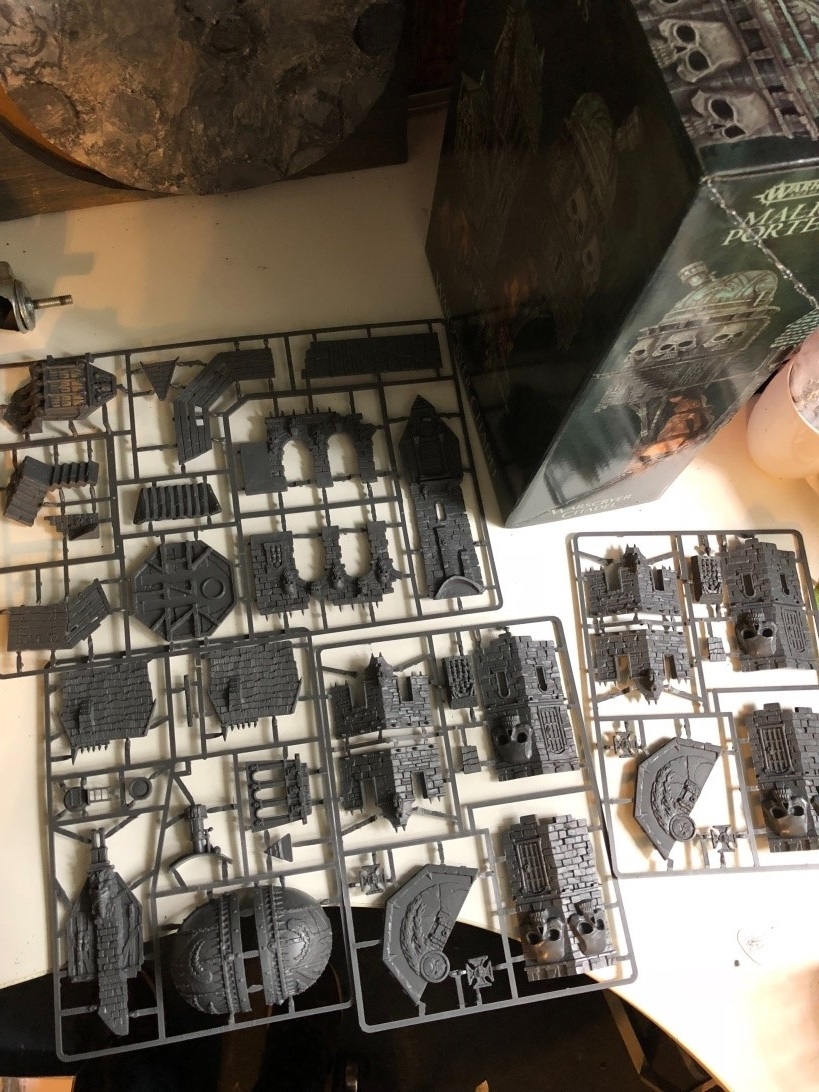 Lots of big, chunky pieces that fit together like crap.

In play, I have to be honest that I actually purchased this model more for use in Frostgrave than Age of Sigmar. And for that purpose, it's a perfect addition to even a small 3'x3' Frostgrave table. It looks great among my snowed-on terrain set, and it gives a lot of verticality to the landscape. In Age of Sigmar, there is actually more thematic value as there are rules specific for the piece in Malign Portents, such as the ability to garrison units inside to gain Prophecy points. I would say that those playing a Malign Portents campaign would do well to see about adding one of these to their table.

This is a fun kit that is a little dated, but it still packs a wow factor. For Frostgrave or other 28mm fantasy skirmish games, I think this is a tremendous buy if you already have plenty of smaller, more generic terrain. For Age of Sigmar, it fits right in with the current Death-centric storyline and offers plenty for those playing narrative campaign games. It's expensive, but if you are willing to work with it a bit it is a fine terrain kit and there really isn't anything else like it of this size and scale in its price range.