Hot on the heels of Shadow War: Armageddon, Games Workshop has presented a new set of skirmish rules for Age of Sigmar in a neat little book that has the usual ultra-high level of production values and fluff writing. Similar to its 40k predecessor, AOS Skirmish is focused on small numbers of units with the concept being that players can get right into the game with a minimal purchase. Unlike Shadow War, which is effectively a reprint of Necromunda's slightly modified 2nd edition 40k rules, this game is based mostly on the core AOS rule set.

In fact, it's almost exactly the same apart from some modifications to account for the fact that you're not commanding larger groups of troops, which includes a new set of six command abilities that you roll for or choose at the beginning of a game. Likewise, there are six Artefacts of Power that you can add to your warband. Moving no longer requires unit coherency, of course, as all models move independently. Battleshock and morale are very different, mostly functioning somewhat like the bottle test in Necromunda/Shadow War to determine when your gang just gives it up after losses are taken. Summoning is right out, which may disappoint Daemons of Tzeentch players looking to pile on the Pink Horror/Blue Horror/Brimstone Horror cavalcade. The bulk of the rules changes have to do more with warband construction, which is simple and easy. You need one hero unit to be a general and then you point everything else out using schedules included in the book. 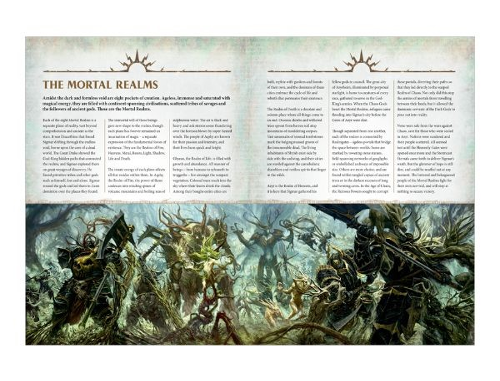 Like any GW book, the Skirmish Rules are totally top shelf all the way through.

There are Renown points for all non-large, current models in the range. Nothing metal (i.e. legacy Warhammer Fantasy Battles units) is included, which negatively impacts some armies- especially Death, which can't even field a Vampire Lord. There are some anomalies in the list- like how the Skaven can bring a Doomwheel and the High Elves a Lothern Skycutter. I don't think of these as "skirmish" units. I especially like that the rules allow for players to build warbands restricted only by Grand Alliance. This means you can run your Stormcast/Sylvaneth/Seraphon/High Elf Order dream team and your buddy can come in with a Chaos Undivided squad. Some factions have far more unit choices, with the more recent armies such as Stormcast getting a much wider range of choices.

Age of Sigmar is great as it is, and truth be told the original rules allowed for skirmish play. That was one of the selling points - that it could be played with any number of models. The value here is in the slight modifications that improve the quality of the game in a smaller format. Additionally, I am especially impressed with how the new book expands on the setting. The storyline is set in Shadespire, a city in Shyish, the realm of Death. The folks there have cheesed off Nagash, the Lord of Death, by figuring out how to keep souls from him. So he surrounds the city with a kind of necrotic desert, and in the city there are apparently treasures from forgotten times and so forth, which sets up the great six-game campaign included in the book.

Compared to Shadow War, the campaign elements aren't quite as extensive and it certainly is not a revamp of Mordheim as many were hoping. The warband construction is similar, and it does not require a different statline or unit profile because it uses the standard AOS warscrolls. This increases accessibility and ease of play, but it also puts limitations on some types of units. You don't get to gear up your fighters or anything like that because they just get what they have on their warscrolls. As consolation, you can use mixed arms regardless of warscroll limitations- meaning you can have Liberators with any of their available weapons, not just the stock hammer and shield loadout.

Overall it is a fast, easy way to get into Age of Sigmar for new players and veterans will appreciate the quick-play option. The cost of entry, if you already have models, is stupendously low and it really should be an automatic purchase for anyone already invested in the larger game. For those just getting into the game, the full rules are included so the book and a handful of miniatures is all you need- and Games Workshop has a couple of ready-made warband boxes available at a good price.

As part of the skirmish release, GW has also put out a new AOS terrain kit. The Sigmarite Mausoleum is really just two of the old WHFB Garden of Morr kits repackaged into one box, which means that you're getting a big ol' graveyard. This is a really fun set and it covers quite a lot of space- judiciously used, it's enough for a 4' x 4' table or game mat. The models are great- above-ground tombs, graves in various states of disrepair, statues, walls and some lovely gates. 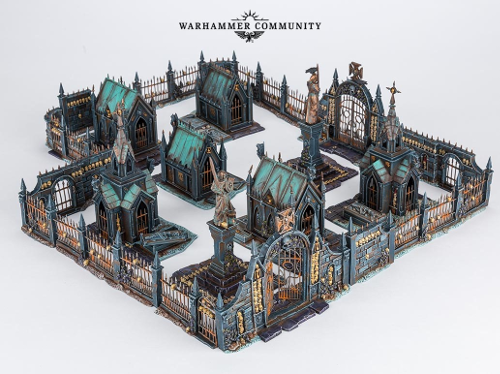 The Citadel Technical paint line comes in handy here- make sure you've got pots of Nihilakh Oxide and Typhus Corrosion on hand for the cool verdigris and weathering effects.

Assembly is super easy, and the kits are molded a little better than some of the more recent made-in-China terrain kits. They are obviously older sculpts and there are a couple of wonky elements (such as molded-on foliage), but they are also very easy to paint with just a couple of simple steps. It's a lot to cover, but a basecoat, wash, and drybrush will result in a cool look. It's a perfect set to complement Skirmish, especially if you pair it up with a Death alliance warband fighting over the Soulblight Necropolis playmat.

The new playmat, which is also part of the Skirmish release, is quite impressive. It is a neoprene (read: mouse pad material) playing surface with a screen-printed image on it of a rocky graveyard. It is of course perfect for the Sigmarite Mausoleum terrain pieces and it fits in nicely with the Shadespire setting described in the skirmish rules. The quality of the mat is superb, and speaking as someone who owns several playmats from different manufacturers I would rank it as one of the nicest that I own. 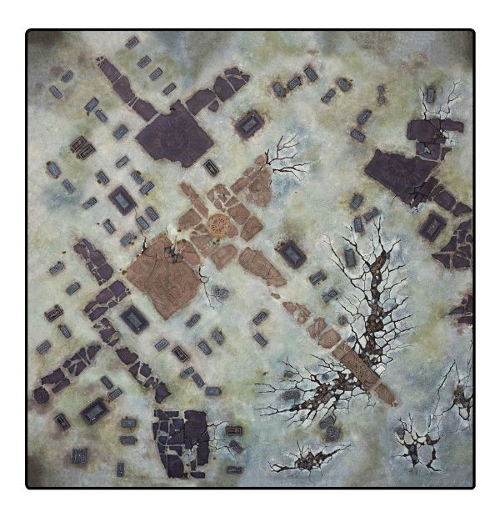 Doubles as a giant mousepad.

However, it is also by far the most expensive playmat that I own. It's twice as much as other mats in the 4'x4' size. And it is also, much like the terrain set, very specific. This means it may not be a good fit for players who want a more general, generic playing field. You can't, for example, really make this piece look like a grassy field. It also needs a little ironing, which is a hassle, because it comes folded in a box. On the one hand, I really like this because it takes up much less space than my rolled-up mats, but on the other it doesn't quite lay flat right out of the box

These products are more great examples of GW's recent trend toward hitting home runs. I'm really excited about the potential for Skirmish as more units and terrain pieces will only make it more compelling. It's a fun and quick way to play that may in some quarters become the primary mode. I'm finding myself more interested in the smaller scale battles recently, and I'm excited about the possibility of future campaigns, different settings, and the possible combinations of units from across Grand Alliance ranges. I wholeheartedly hope that GW continues to support smaller scale gameplay.