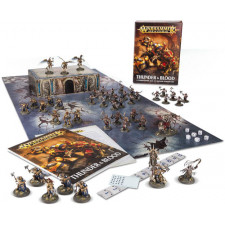 When Games Workshop blew up The Old World setting of the beleaguered Warhammer Fantasy Battles tabletop game and turned it into the sleek and far more accessible Age of Sigmar, it was something of a rough launch. But we're two years on and the game has come into its own as an awesome fantasy wargame with plenty of character, strategy, and of course great models. The original launch offered a fairly standard GW starter box, with forces for the new Stormcast Eternals and Khorne Bloodbound armies. They've gone back to that starter kit and revised it quite substantially, making it a much better starting point for those new to the hobby or for those looking to check out what the game has to offer. 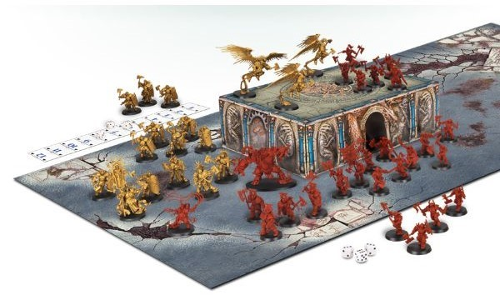 It's a box! It's terrain! And none of that is painted!

Thunder and Blood is the new box and from the very box itself the intent is clear - it doubles as a terrain piece. Also new inside are a basic paper battle mat (that you'll likely outgrow quickly or ignore altogether), a new rulebook that includes a series of "learning game" battleplans that gradually become more complex, simple painting guides, and warscrolls for every unit. 44 push-fit miniatures are included, and they are molded in color- gold for the Stormcast, red for the Bloodbound. Missing from the original starter set are a few of the leaders for each side (a Lord Celestant on a Dracoth, the charmingly titled Bloodsecrator, and the Mighty Lord of Khorne. The omissions are a trade-off for a much lower price point, and it's mostly worth it - especially since the errant miniatures are now available separately.

I especially appreciate the purpose of this set - I very much like seeing this packaged almost like an all-in-one board game, and truth be told if you have no interest in ever expanding on the collection offered here, you could easily regard it as a very limited, all-inclusive Age of Sigmar experience. You don't even really have to paint the figures, and you don't need glue to put them together. It's as close as GW gets to an "open up and play" experience" and there is plenty of material showing off the rest of the hobby. The guidance provided is, of course, really marketing to ease buyers into the terrible spiral that is polystyrene plastic and acrylic paint addiction but it is nice to see this presented as a "first purchase" sort of product. It would be perfect to hand to a curious kid or long-lapsed veteran.

It's paper, but it beats your wood grain IKEA tabletop.

There's a nice variety of units provided that showcase each faction's strengths, but with that said in some ways these two groups are the most boring that Age of Sigmar has to offer. I would have rather have seen a Sylvaneth versus Tzeentch Arcanites set, or something featuring the new Kharadron Overlords, but those are all also factions that would betray the entry level concept here. It's also significant to note that with this particular set of models, if you get into painting you'll get to try lots of different techniques. There's armor, cloth, bones, metals, skin, horns, leather, and pretty much the full range of textures among them. It's a well-thought out assortment.

As for the game itself, it's awesome. I am a huge Age of Sigmar fan and I think it is a highly innovative, forward-thinking piece of design from a company that was previously known for rules that were somewhat outmoded. It's a four page ruleset with most of the heavy lifting done by the unit rules in the warscrolls. But even those aren't overwhelming, and this set keeps things fairly simple without some of the more complex synergies afforded by units such as that AWOL Bloodsecrator. I feel like the battleplans provided give new players a good, progressive way of easing into the larger game, and more importantly they give the game a sense of narrative structure. It's pretty common for folks to come into a game like Age of Sigmar and spend the first few games without scenarios or narrative objectives, basically just crashing armies into each other in a sort of deathmatch format. This is a big mistake, because this is a game that really shines with specific objectives and strong story-driven action. So hopefully folks will follow along as they should.

Should be easy to sort out the good guys from the bad guys here.

Overall, I think this starter set is an improvement over the original one based on its price point, accessibility and entry level purpose. It is also quite a few steps up from last year's little Storm of Sigmar sampler. I like that I can recommend this as an entry point without disclaiming that you'll also need to also buy $50 worth of modelling supplies, $100 of extra units, and whatever you want to spend on terrain and a playmat. Longtime players of tabletop wargames might do better spending their money on the General's Handbook and one of the great Start Collecting boxes, but with that said those veterans looking into either of these two factions will find this set a great value.