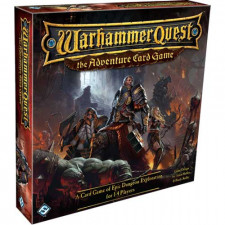 What do you do when you have a license to produce Game Workshop games but you are prohibited from developing or re-releasing any kind of miniatures-based games like, say, the venerated and widely beloved Warhammer Quest? If the answer is to cook up something like the new Warhammer Quest Adventure Card Game, itâ€™s the right one. Designer-brothers Adam and Brady Sadler, moonlighting from their day jobs in the power metal outfit Lorenguard, have delivered a stunningly modern, reductive dungeoncrawl card game that stands among the best in the genre despite its lack of miniatures, complex scenarios, detailed campaign systems or a board. Mechanically it fits squarely between the Lord of the Rings LCG and Fantasy Flightâ€™s own Death Angel and the traces of those designs are apparent, but this game has a couple of novel ideas up its sleeves while managing to capture the spirit and tone of the original Warhammer Quest.

Look, there are a lot of fantasy adventure games on the market right now and there a ton of dungeoneering designs out there. I get it. I also get it that Pathfinder, over time, didnâ€™t pan out for a lot of folks (including me). And there are those who want something either more complex like Mage Knight or something less daunting like DungeonQuest. But this game is the real deal, an all-inclusive medium weight delve with great tactical encounters, meaningful cooperation, killer monsters, loot and an appropriately dank atmosphere.

The cost to enter is low but this is not a typical â€œcore setâ€ offering that functions as little more than an advertisement for a product line. The game is complete with four great characters, plenty of encounters and locations, a five scenario campaign and a fantastic all-in â€œdelveâ€ quest that will likely be how most will play this game over the long run. Itâ€™s one of the best values in the hobby for under $30 (at least here at Miniature Market). Itâ€™s also addictive, replayable and challenging without ever feeling unnecessarily punitive or capricious. And it plays solo beautifully and multiplayer equally well.

Choose the Dwarven Ironbreaker (a fighter), the Elven Wayfarer (ranger), Bright Wizard (fire wizard) or High Priest (Paladin). Each has four action cards- attack, explore, aid and rest- that function differently based on the class. On a turn, you do either one or two these and exhaust the card, depending on how many characters are in the game. One of your cards has a reset icon, which refreshes everything. The core function of each card calls for a die roll with each success incurring one damage to an enemy, a travel marker placed on the location, a success token to give to another character, or a point of healing. And these dice explode indefinitely, so you can have amazing, heroic turns.

But if there is a monster engaged with you, they interfere with your action and you roll black dice along with your white hero dice. Roll the claw marks and everything in your play area does damage to you, unless you rolled shields. There is also a Nemesis result and effect, which is how the scenarioâ€™s big boss can impact your quest. This is such a cool system that offers players opportunities to take risky actions to get clear of a difficult location or to cooperate using ranged attacks and engagement effects to help other players focus on what they do best.

After the heroes all have a go- which may include drawing narrative dungeon encounter cards, finding consumable item or gear cards or simply cleaning house with deathblow-like strokes of the axe or hammer- all active, unexhausted monsters have a go. Each type is completely unique with two or three activation steps. Night Goblin Archers will retreat into the Shadows (meaning that they disengage with the players) to take a pot shot. Ghouls will shamble up to a player and inflict a Disease status. Some creatures like the Black Orc will harry and intimidate the players, some will go after the strongest players. The Skaven Jezail squad will accidentally blow themselves up. The AI system is among the best Iâ€™ve ever seen because itâ€™s so simple and it delivers both a sense of active enemies and a level detail- just follow the instructions. I also love how it works in tandem with the action opposition mechanic described above.

After the monster round, the effect described on the current Location card goes off, usually doing something bad for the heroes. But if the players have explored enough and the travel markers exceed the noted limit, itâ€™s on to the next area of the dungeon and a new monster spawn that places enemies both in engagement with players and also in the Shadows. A Peril phase closes out a turn, advancing a marker and depending on the scenario, possibly triggering poison gas clouds, a boss monster showing up to take matters into their own hands or other story effects.

And then there is the character development system. Aside from acquiring gear cards, these heroes develop along two metrics: actions can be upgraded to â€œadvancedâ€ cards and the gear limit can be increased. If you play the campaign game, there is an interstitial town phase where players, in abstract, can visit a blacksmith, arena or trainer to effectively level up. Depending on the outcome of the scenarios, players may add cards to the gear deck that grant access to three different pieces of legendary gear for each character. But in the delve game, which I prefer, the entire arc of development is managed along the way as players enter the second and third tier locations.

It takes a game or two to get all of the above going smoothly and it is somewhat more complex than it appears after reading the perfunctory â€œLearn to Playâ€ book. Many critical timing rules and essential details are in the separate Rules Reference and even the setup process isnâ€™t quite clear at first. The first few games I played were of the â€œare we doing this rightâ€ variety and I still feel like it needs a serious FAQ after a dozen or so games. But once players grasp the process and work through some of the more ambiguous rules, a truly great game emerges that is well worth the effort. Having just recently played Mistfall I can at least state that we are not in that territory in terms of shoddy rules-writing and confusing presentation so donâ€™t be intimidated.

I think the Sadlers have completely knocked it out of the park with this game. I love that it is compact (it could fit in one of those slim Silver Line boxes), itâ€™s tightly designed and by Sigmar it completely succeeds in delivering a design that feels like a streamlined, masterfully edited version of Warhammer Quest. These guys totally get what matters the most in the dungeoncrawl genre, and it may surprise some that â€œmodular dungeon tilesâ€ and â€œlots of miniaturesâ€ are not part of that equation.