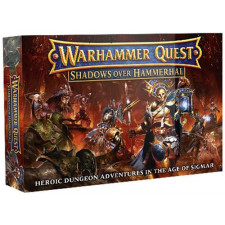 Warhammer Quest: Silver Tower reinvented the wheel, the one full of spikes, skulls, and nostalgia. Shadows Over Hammerhal iterates the design and brings it closer to perfection. Out is the very interesting but very strange Tzeentch lair of change, in is the seemingly common underground labyrinth of yet another fantasy city. Or so it seems.

While Hammerhal adopts a more traditional outlook on the combat spelunker lifestyle, the game is anything but rote. It chops you in the knee caps upon launch with an exceptional 30 pages of flavorful introduction. Yeah, get out your reading glasses and your preferred hard beverage and dive in. The novella is well written and offers actual character development and context for the game at hand. Despite Silver Tower boasting a much more interesting setting, Shadows Over Hammerhal feels far more immersive. I'm actually attached to that fiery Dwarf wielding firearms and the noble Castellant waving his halberd around like he just don't care. 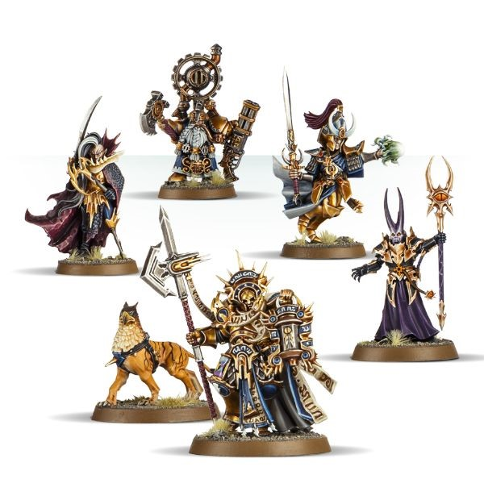 Now, which one is the Warrior and which is the Thief?

The game doesn't stop there. It continues to draw you into the narrative and atmosphere with its new tricks. The core system of rolling pools of dice and spending them to trigger character abilities (a la Claustrophobia) is still intact, but the new angle of a player controlling the minions of Chaos is more than welcome. Yes, you can't play this one solo and need your most malicious of friends to push around the opposing plastic, but the change is for the better.

Silver Tower 2.0 reinvigorates the conflict by utilizing its dungeon master with full force. It features hidden passageways, deadly traps, and scripted events its predecessor could not hope to achieve. The labyrinth feels more alive and tenacious. The obfuscation of its management also allows you to maintain your suspension of disbelief.

What's also particularly interesting is how this game crosses so many wires. Mechanically it's sound and streamlined, but from the perspective of historical context it's a greatest hits album. It not only pulls out the strongest qualities of Silver Tower, but it maintains its nostalgic link to Warhammer Quest while also sprinkling in a bit of the classic HeroQuest. Oh yeah, snap into that Slim Jim.

Many games have chased that ephemeral HeroQuest personality but never has a dungeon crawler edged so close. Shadows Over Hammerhal manages this feat by keeping secrets. The dungeon is revealed over time in layers, much like its elder. It hits you with secret doors and gives narrative hints toward future danger. The execution really tethers that atmosphere to the mechanisms in a simplistic way. It manages to put you in a similar head-space as the classic. Similarly, you could easily play this with a younger audience with minimal hand-holding, yet it boasts actual depth and engaging play.

It also reincorporates more of that Warhammer Quest regalia. You have an excellent integration of a town phase. There's also a stronger element of spatial cohesion in that dungeons are linked in play through connected stairwells. This provides scope with a simple trick and is much appreciated. It really feels understated at first but the way the dungeon unfolds like a dragon unfurling its wings-it's imaginative and compelling. 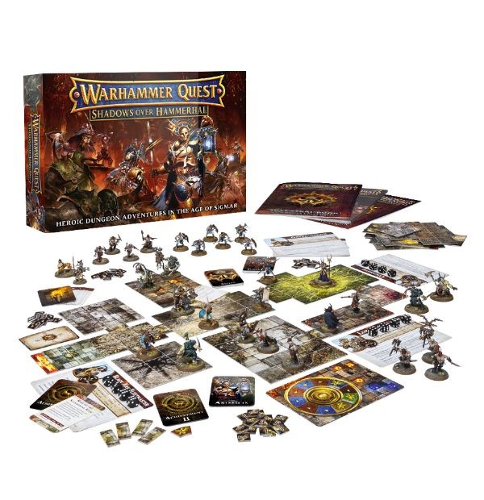 Beautiful, in that Games Workshop way.

Shadows Over Hammerhal is great. Yet I can't say it's perfect. The reliance on an evil Chaos sorcerer as its primary antagonist is a letdown. That's a complete rehash of Silver Tower and feels rushed. Games Workshop also still hasn't fixed the issue of flipping through the rulebook for monster stats and behavior charts. Finally, play is somewhat limited as the reliance on those DM secrets inhibits replayability. Typically you'll get about 8-10 sessions out of the thing.

But those 8-10 sessions will be fantastic. You'll be hacking up agents of Khorne, discovering rare artifacts, and grinning ear to ear. This is a game not about piling on a shelf full of stretch goals and unimaginable content that may or may not be fully developed, it's a game about tossing caution to the wind and burying your great-sword into the thick skull of a heathen.