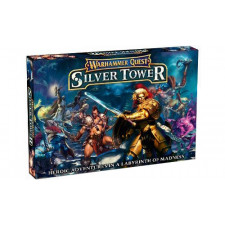 Sometimes I fear that board gaming, as a hobby, has reached peak dungeon crawl. Thereâ€™s the classic black humor of Dungeonquest, the accessible bread-and-butter D&D Adventure System, and longer campaign-based systems like Descent and its descendants, and any number of Kickstarter offerings. Any new entry into the genre has to justify its own existence to some extent, and even then there are only so many hours in the week to spend slicing goblins. Itâ€™s into this crowded market that Games Workshop decided to reboot their classic Warhammer Quest franchise. The first game in the series, Silver Tower, arrived almost a full year ago, and it has risen to be one of my favorite board games of the past year or so. Itâ€™s a dungeoncrawl that manages to lean into the gamier elements of the genre.

Nope. No gray, stone tiles here. This is dungeoncrawling on acid.

Silver Tower is a cooperative game. The players are all heroes in GWâ€™s Mortal Realms setting, having entered a Silver Tower- a magical edifice under the power of the Chaos god Tzeentch and his emissary, the Gaunt Summoner. The players are presented with a series of trials in which they recover artifacts, along the way gaining skills and treasures that will help them in their endeavors. The backbone of the game is an action dice system. At the beginning of a turn, players roll four dice that will be used to take different actions. Moving and exploring only require a die showing 1 or more pips, but more effective actions might require higher rolls. There is also a common pool of dice the players can draw from, which are rolled at the beginning of the round. Monsters are spawned when certain rooms come up. When itâ€™s a monsterâ€™s turn, they will roll a d6 and consult a table on their description that says how they will behave this round. It feels a little like the monster activations in the D&D board games, although this is much more unpredictable and wild.

As befitting a shrine to the Changer of Ways, the Silver Tower is a mercurial setting. You can play the same scenario over and over again, and it will feel drastically different every time. This is because the GW has created a system where the possibilities for any trial are highly variable. The rooms will come out in a different order, different events will be activated through die rolls, and monsters will follow different strategies. All of this is tied together with the Adventure Book, a book filled with paragraphs that give the players some great narrative beats and different challenges to overcome. I am frankly in love with the Adventure Book, because it has such a broad range of challenges including some rather whimsical elements. Some are speed-based, some revolve around dexterity elements. There are puzzles and riddles as well as choices that could produce unforeseen consequences. The finales may only surprise once, but the journeys to them are always unpredictable- just as it should be in a game themed around the Lord of Change. The protean nature of the setting becomes a strength rather than a liability. Instead of feeling like something thrown together and generated randomly, Silver Tower feels alive and dangerous in a way that few board games manage.

Thereâ€™s not a lot of narrative coherence from game to game, especially because players can choose to tackle the nine trials in any order, but it works because it meshes with the idea that the players are trapped and awaiting the next test from their capricious captor. Unlike many recent campaign games such as Gloomhaven, there isn't an impetus placed on continuity. The same players aren't even required for every session nor are the same adventurers. There is a degree of continuity provided through attaining skills and artifacts- which may or may not even follow the character into the next scenario.

All of these design decisions come together to make a delightful experience. Iâ€™ve never played a dungeoncrawl that conveys such a strong sense of place and it is a decidedly unique, psychedelic fantasy concept more in line with Michael Moorcock than Tolkien or Howard. The artwork and production does a lot of heavy lifting here, as one would expect from Games Workshop. The tiles all show some weird combination of strange creatures, arcane machinery, and frightening pits into nothingness. As with every Games Workshop product, Silver Tower is meant to showcase their impressive line of miniatures, and the models here are staggering. The sculpts are all dynamically and they are highly detailed. Despite their apparent complexity, the models are all mono-pose, meaning that there are no optional ways to build them or customize them which makes them somewhat easier to manage for neophytes just coming into the world of miniature gaming. The painting-averse need not fear- these figures look great unpainted.

Come on, anyone can paint this good. Right?

Because of its emphasis on setting and experience, Silver Tower offers exactly what I want out of a game like this. But if your favorite thing about dungeoncrawls is tactical nuance, you might find Silver Tower to be something of a letdown. Thatâ€™s not to say there isnâ€™t anything to think about here, quite the opposite in fact. But it is a very dicey, hack and slash game, and if you arenâ€™t interested in its capricious challenges you might find the whole thing a bit gimmicky. But that novelty also means that no other game really does the same thing, even those that are theoretically in the same genre.

Do we really need another dungeoncrawl? If the result is as good as this one, then the answer is yes.