Games Workshop's Shadespire is a design unlike anything else the company has ever released - a competitive, small-scale skirmish board game with customizable decks. I gave the base game a full five stars in my review and it has emerged as one of the top titles this year. It's a thrilling, tense, tightly wound game full of surprise and compelling depth and of course the one thing it needed out of the box is expansion. GW has answered that call, pushing out two small box add-ons that each add a full warband and an assortment of faction-specific cards that you can use to really leverage unique qualities and generic cards you can add to your collection for use with any of your teams. These also introduce the Death and Destruction Grand Alliances from Age of Sigmar into the fray, and as such we're getting undead and Orruks out of the deal. 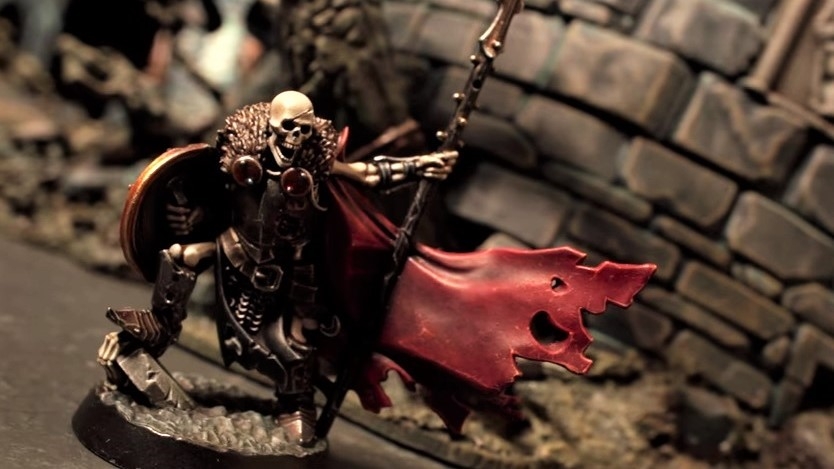 If only my skeleton were this awesome.

The Sepulchral Guard sends seven skeletons to battle and they are the best skeletons GW has ever produced with one major issue. They are in the same, smallish scale as the old WHFB skeleton kits so they look goofy next to a Stormcast Eternal or a Bloodreaver. Regardless, they look amazing, and they are really fun to paint. As with the base game, they are push-fit and molded in color (this time, obviously a bone white) so no painting is necessary, but I would encourage even those who have never tried to paint to take up the brush with these dudes. Once assembled, they take to the field with a Sepulchral Warden leading them that can not only raise fallen fighters from the dead, he can also activate multiple fighters at one time. Oddly, I find that the multi-activation is more useful than the necromancy due to the extremely tight framework of the game. But bringing back the dead also brings them back Inspired, which is quite nice. 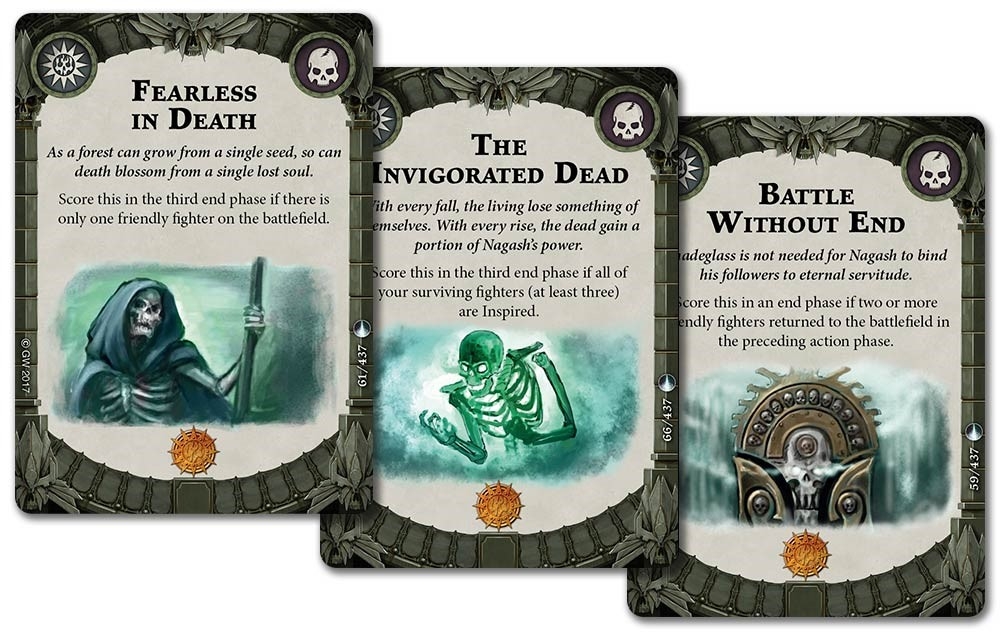 The cool death-themed objective cards are some of the coolest in the game.

The Guard is also fielding seven fighters, more than anyone else yet, but of course they are more fragile despite being able to threaten more territory. I've found that using the weaker Petitioners to hold backfield objectives and protect the Warden while using the more aggressively tuned (and hopefully upgraded) Champion, Prince of Dust and Harvester to push toward objectives and interdict enemies. I'm also of the mind that Sepulchral Guard plays better without the standard objective-holding cards- they crumble quite easily, and there's rarely time to re-mobilize a downed Petitioner. 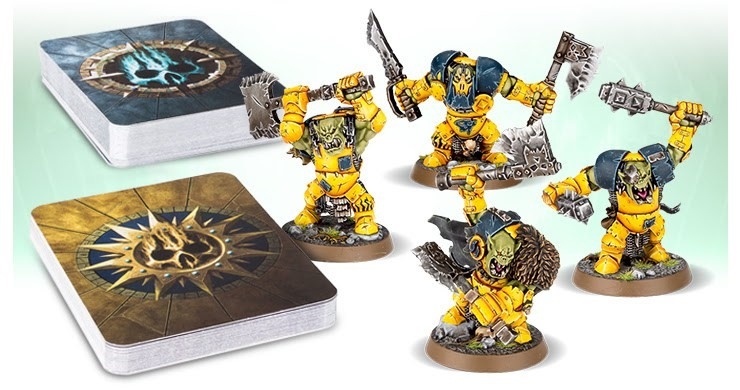 I have nightmares about painting this yellow.

Ironskull's Boyz are a band of rowdy Orruks and I'm sure it must be difficult to guess what kind of playstyle best suits this armored bunch of brutes armed with various implements designed (?) to chop, hack, bash, and slash. This is warband made for more aggressive play with lots of upgrade and ploy cards that enhance their ability to chop, hack, bash and slash, giving them extra attacks or granting bonus moves on top of an attack action. They are also extremely hardy, so even with the second lowest fighter count in the game (four) they have staying power and can be very hard to shift. And if you ding 'em, they get Inspired and even more dangerous.

This is an in-your-face warband, and they ain't pretty to look at. The Age of Sigmar Orruk redesign is not one of my favorite looks in Warhammer, but the models are good (and green). I have to be honest that I hated painting these guys. I like to do the "studio colors" on most of my models so I did the yellow armor even though I struggle with yellow. I used the Citadel Paint App and got a great skin tone, but the armor just looks like garbage. It's no fault of the product, but I think beginning painters that want to slap some acrylic on these Boyz should be aware that these are more challenging to paint than the Sepulchral Guard. 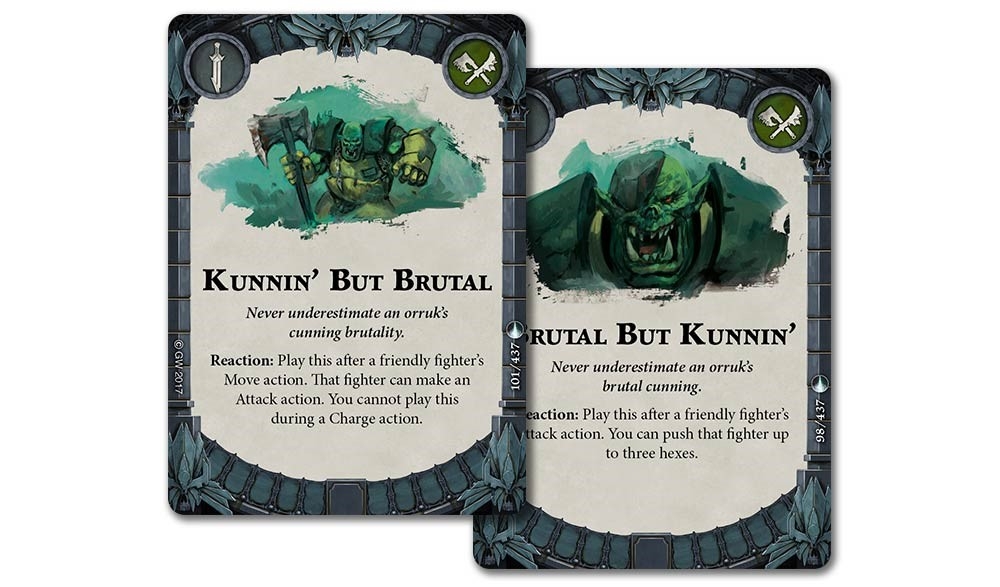 Two of the Orruk's best and most powerful cards- expect to see these in any Orruk deck.

In all, I like both expansion warbands but I think there is one glaring, screaming issue that is enough for me to dock a half star. I strongly dislike that these sets did not come with a "stock" deck list packed in the box. The core set had decks prepared for new players for its two factions, with these warbands you will need to put together a deck. And if you are a new player - or if you aren't interested in the deckbuilding and just want to play with a preconstructed deck - you either have to wing it or netdeck it. I netdecked for both of these factions and that is what is in my box right now, ready for play. With that said, adding these sets to your core set gives you lots more options not just for the new warbands but also for those in the core set.