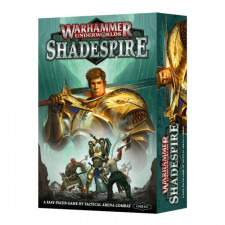 With the GenCon hit Shadespire now in general release, it is quite clear what Games Workshop has been doing to follow up on Gorechosen, last year's outstanding arena battler. They were likely busy at this time last year not concerned with extending that game, but with creating a whole new brand (Warhammer Underworlds) and developing a more refined and more sophisticated set of mechanics and gameplay concepts that would not only support more factions, but also competitive play. Also quite clear, after playing the game, is that GW was looking for a product that could compete not only with X-Wing and other widely played and supported miniatures games, but also the larger board gaming market. 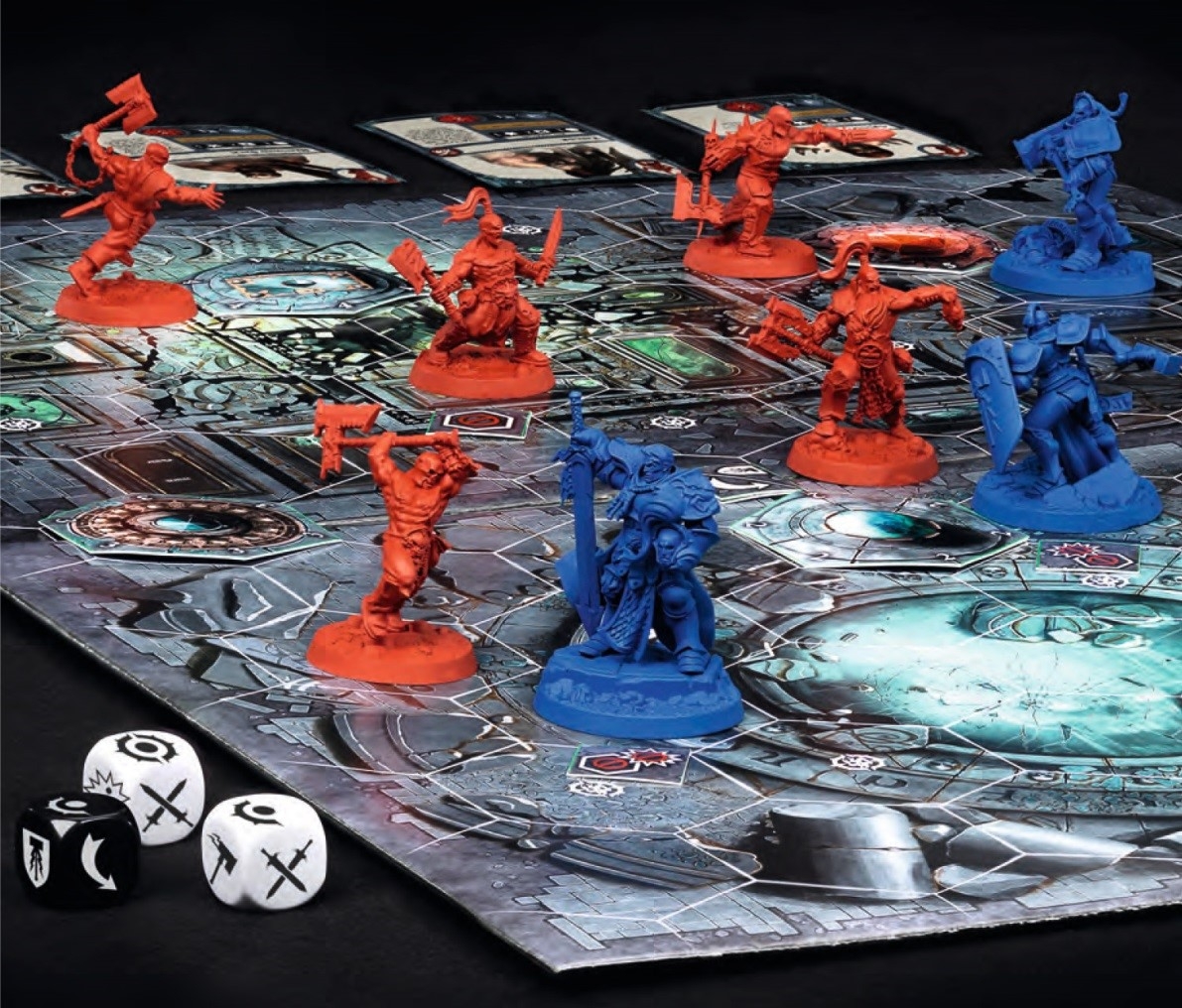 Shadespire is unlike anything that Games Workshop has published to date. This may be the first game that the company has produced that really feels like it is something developed outside of the "Nottiingham bubble". Indeed, the game reads much like a reaction to recent trends in tabletop gaming beyond Warhammer. In fact, there really isn't much here that feels like a Warhammer game. In past specialist games titles, such as the Horus Heresy games or even Warhammer Quest: Silver Tower all of the gameplay and lore echo elements in the core 40k and Age of Sigmar rule sets. But strangely, Shadespire doesn't feel like it necessarily has to be a Warhammer game despite the presence of Stormcast Eternals and Khorne Bloodbound in the starter box. The thing is, it would be just as great a game with any fantasy setting.

Players set up the game by placing a board for each participant, which can create many different play fields based on how you connect each of them. And a game played on boards touching along their shorter ending (thus creating more of a corridor) feel very different than those where the boards completely share their widest edge. Along with the 3 to 6models of their chosen faction, each player must supply a deck of 30 or more power cards that will provide upgrades, reactions and other effects. These decks are constructed, so there is a CCG-like element at play here to complement the fairly standard dudes-on-a-grid fighting chassis. 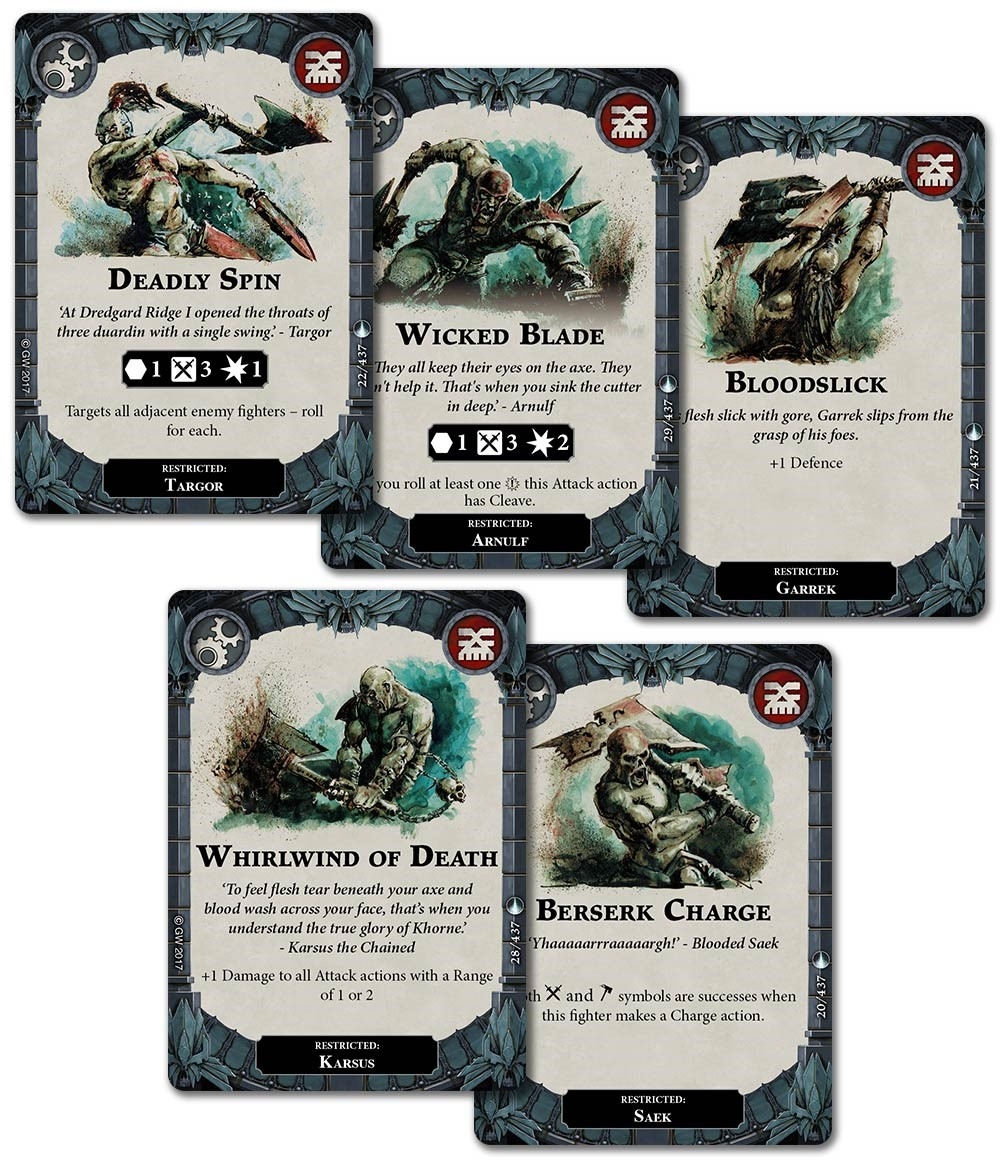 But more interestingly, each player has to also provide a constructed objective deck. This is a set of cards that are drawn throughout the game to determine what will give you points. At the end of each of the three rounds, you check to see if you have fulfilled the conditions of any objective in your hand. These may be to hold specific points on the board, have models in enemy territory, or to KO an opponent. Or, you might have one that grants you points if both sides are completely eliminated.

These objectives do much to elevate the game beyond the routine skirmish gameplay seen in other games of this type. Each turn, you might have three new objectives in hand-and these direct your decisions or you may be in a situation where none of them involve fighting and you have to play a more evasive, defense round. This is really smart stuff and keeps the game from devolving into a shallow slugfest. You do get Glory Points for KOing the enemy, but I really like how the designers have built in this sort of achievement-based objective system. What I also like about is how Glory Points, once earned, are also a sort of currency. You exhaust them to buy upgrades for your characters. Don't tell anybody, but what the designers really did with all of this is sneak some rather Eurogame-y short term objectives into this design.

As previously mentioned, this is a tight and fast-paced game. It takes about 20-25 minutes to play and there is a hard three turn limit. Within those three turns, each player gets to take four actions which include moving, attacking, drawing power cards, or adopting a guard posture to get a bonus to defend against an attack. This means that each side gets only 12 actions during the entire game. This makes every play, every movement, every attack, and every objective feel heavy. The stakes are high- especially if you are playing competitively- and you can expect to watch your fighters be completely destroyed.

Combat is brutal- it doesn't take much to eliminate a unit. Damage output is high, with units hitting on rolls matching one of two different types of weapon symbols depending on the attack the character performs. Likewise, defense success is determined by whether the attacked character rolls the correct symbol on defense dice. Certain upgrades or effects cause both symbols in either case to be regarded as successes, and a player that rolls more critical hit symbols than the other is granted an automatic success. But more compellingly, characters can support each other. If you have one ally adjacent to a defending character or a target, there is a symbol that you can convert to a success. If you have two, there is another symbol that converts to a success. So having friends help is always good, and it makes tactical positioning a very serious consideration in the game.

There is also an "Inspire" state for the characters, which matches up with their faction identity. When conditions are met, you flip over the character card of the inspired character to enjoy increased stats and abilities. The included Stormcast Eternals are inspired by successfully deflecting attacks with their Sigmarite shields provide while the Khorne Bloodblound maniacs find inspiration as three or more characters are KOd. This is a nice way to differentiate the factions, and it helps to sell their identites. So you have one side in the starter box that genuinely feels like a hardy, resilient force and another that feels like a mob that gradually gets whipped into a battle-frenzy.

As for the product itself, the model count is low but as usual the GW production quality from the cardboard to the plastic is among the best on the market and I think the price point is completely reasonable as the miniatures are somewhere between standard Citadel quality and above average board games miniatures. I especially like that the box comes with decks that you can play literally right out of the box- you can be playing in about ten minutes- and a completely separate pack of add-in cards for when you are ready to try some deckbuilding. This is a smart way to ease new players into the more complex matters of making a deck, and I'm sure some players may be completely satisfied playing the game with the preconstructed, stock decks.

Between the cardplay, the constantly in flux and asymmetrical agendas, the tactical positioning, and the differences between each character, there is quite a lot going on here beyond the dice-rolling, smash-mouth good times that its predecessor Gorechosen offered. I think this game could actually work as a competitive concern, although I question whether it will draw as big an audience as I'm sure GW would like for it to. With that said, this is a very accessible, appealing game that is easy to learn, but offers much to explore. With more factions already on the way immediately after the core release, the support is there for the immediate future and the game has nowhere to go but up. But will it manage to bridge the divide between board gaming and miniatures gaming in the long term? I really don't know just yet, but I know that I love this game and I am looking forward to more.