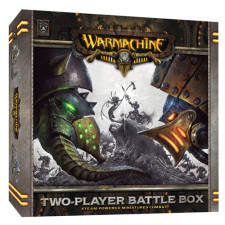 I was first introduced to Warmachine over ten years ago. At the time, I owned and operated a retail game shop and I carried the product line, which wasnâ€™t exactly setting the sales charts on fire in my store. I liked the Soviet-inspired look of the Khador faction, so I set about collecting and painting up the various Warjacks, Warcasters, troopers and other figures. I had a guy that came into the store that offered to teach it to me, so we were off. Within a few weeks, I was selling a couple of thousand dollars of Warmachine a month and hosting big events. What was appealing about the game back then, in contrast to Warhammer 40k in particular was that it required smaller numbers of models, you could track everything with dry erase marker on cards tucked into sleeves, and it was a much more aggressive, quick-playing game. If 40k felt like American Football with lots of setup, standing around talking, and then a little procedural action, then Warmachine felt more like a rugby match.

I remember very clearly the first game I played when this mentorâ€™s Cryx warjack slammed one of mine. It flew back into some trees, got knocked down, and took a bunch of damage. It was visceral, exciting and it wasnâ€™t long before I realized that the game was full of â€œhell yeahâ€ moments. If it wasnâ€™t the brutal, head-butting, body-slaming jack-on-jack violence that was generating the â€œhell yeahsâ€, it was the cool magic system whereby the Warcaster in your army would use focus points to boost your warjacksâ€™ combat prowess or affect all kinds of thematic buffs and debuffs. Whatâ€™s more, I really liked how the game had some serious- well, letâ€™s call it what it is without branded nomenclature- mech-on-mech action as well as rifle infantry, cavalry, artillery, dudes with lightning swords and even Baba Yaga.

Thankfully, the regrettable â€œplay like youâ€™ve got a pairâ€ tagline has been retired but Privateer Press has just released a new MkIII edition of the Prime rulebook and with it a two-player battle box featuring Cygnar (electricity-loving blue and gold humans) and Cryx (diseased/cursed/corrupted black and green undead). I wanted to check out the new rules and the new set so Privateer Press kindly offered a copy on behalf of The Review Corner. Hordes, the monster-focused sister game, has always received a new two player starter as well and I would expect my assessment here to be applicable mostly to it as well.

Why are the â€œLawful Goodâ€ human factions always blueâ€¦

Since I am going on ten years removed from the game, I wanted to approach it completely fresh so that I could get a sense of the value that this battle box offers. As a starter product, Iâ€™m pretty impressed with the thoughtfulness and comprehensiveness of the package. You get the full rulebook in a â€œminiâ€ sized edition, a tutorial guide that literally walks you through everything from movement to attacking to magic, counters, a paper ruler, a playmat, and of course dice. I was a touch disappointed that the templates are just flimsy cut-out things, but at least they give you a little scenario to play with the units right out of the box.

The two armies basically replicate what you would get in a faction-specific Battlegroup box (which alone are actually a viable way to play small-scale skirmishes) complete with several core Warjacks and a competitive Warcaster, but in this two player starter you also get a full trooper unit for each. So Cygnar gets some Stormblades, Cryx some Bane Warriors. I think these give you a nice feel for what you can expect from each faction and each comes with a little fluff book to explain some storyline as well as basic tactics. And of course, some next steps should you wish to open your wallet to Privateer Press. The units are well-chosen; they definitely serve as a good foundation for players that decide to get deeper in the game. This is a set of versatile, evergreen units that will find their way into army builds for years to come.

As for the models themselves, I was curious to see how Privateer Pressâ€™s plastics were and Iâ€™m of a mixed opinion on them. Back when I played Warmachine, it was all metal, all the time. The new figures are that dreadful â€œresticâ€ sort of material that is somewhat between resin and plastic. I find the material to be a little too soft, sometimes difficult to work with, and too easy to mess up. The sculpts are nice and they are well cast with few mold lines or errors, but they are also unusually difficult to assemble. If you are coming from recent Games Workshop products that fit together almost like magic, you are in for a shock putting these Stormblades together. I struggled with them in particular and although there is some very basic modelling instruction included for the ground-floor beginner, there is no assembly guide provided. Once assembled and painted, everything looks nice but I think those totally new to miniatures games might be surprised at the level of challenge they may present.

In all, this is a great way to check out Warmachine for those totally new to it. As a lapsed veteran, I found it easy to get right back into the game and I was happy to see that its best qualities have lasted all of these years. Iâ€™m still not particularly invested in the fluff or the setting, but I really like the system itself. I once said, many years ago after playing a game of Renegade Legion: Centurion, that I would love any game that a damage grid where you check off boxes and disable systems. Thatâ€™s here, as well as lots of flavorful and distinct rules flourishes that elevate the otherwise standard miniature games tropes to another level. On the flip side of the positive, the game does still seem to be very focused (an in-game pun there) on developing certain combinations and identifying particularly competitive or advantageous builds- possibly even moreso than other miniatures games out there.