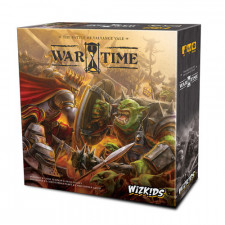 Wartime sounds less like a board game and more like an 80's action figure line. What time is it? Wartime! Hooyah! Cut to a van driving through the screen and firing a little plastic missile, nailing Timmy right in the eye. Wartime! Get some!

I prefer my board games like I enjoy my action figures - prominently displaying a gimmick and full of awesome accessories. Wartime(!) owns its gimmick like an action figure relentlessly exercising its karate chopping ability. Only here it's a bevy of sand timers instead of a plastic arm swinging one inch up and down.

But first let's set the scene. This is a story we've heard before told in a new way. The bad guys, full of the typical nasty orcs and goblins, are invading the land of the good folk, ye olde knights and footmen. The tale is woven over multiple scenarios for two players to battle it out, each lasting a mere 5-10 minutes. You'll siege castle walls and clash against lines of infantry. Variety is strong and objectives vast as the narrative unwinds in a loose head to head campaign structure with branching paths. The way this design deftly supports an extended experience while also allowing one-off games is admirable and robust.

The objectives are all over the place. One scenario has a swarm of goblin wolf riders and a giant hunting the Valyance King. Another has the plucky humans surrounding the Firebrand army and destroying their malevolent summoning circle. It's evocative stuff but itâ€™s immediately overshadowed by the unique process of play.

Turns are for the birds. Instead, players act simultaneously moving stacks of discs representing their units across the hex board. You'll occupy terrain such as forests and hills. You'll attack nearby enemies and spill cardboard blood (pulp?). It's a simple process of selecting one of your available stacks and clearly declaring a movement or attack. Once you've completed the action-usually frantically like you're trying to catch a tossed baby-you take an available sand timer and place it next to the activated unit. This ties up that particular group until the timer empties, allowing you to press it back into action.

Attacking is deterministic as you remove a number of discs from an enemy within range equal to your attack value. Orcs and Man-At-Arms hit hard, while Shamans and Goblins toss smaller rocks. There's character and personality in that mounted units can charge, pikemen can attack from two spaces away, and magic users can cast spells. There's a great deal of sophistication for a game that plays out quicker than an episode of Rick and Morty. 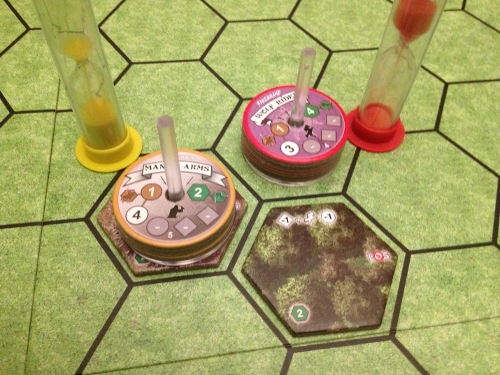 No minis, yet plenty of plastic.

The juxtaposition of breakneck riffing with thoughtful strategy is delightful. Wartime is not at all a game that plays mindlessly or hollow. Every element at the table is under your control, including managing your sand timers. The action of even deploying a timer bears scrutiny as you're given cylinders that span 30, 60, and 90 second intervals. If you want to hammer the flank of the greenskins repeatedly you need to get that 30 second sucker on your knights. Swapping them between units as they expire is also a pressing need as you typically have far more warriors than available counters. This swirling cacophony of pressure and trying to maintain a clear head is addictive and a downright hoot.

There's a delicate balance between a large number of available units and maintaining information clarity. In the heat of two dimensional combat it's easy to lose track of your opponent's abilities and it can be difficult to spot numbers on discs at an Orc's arm length. The visual presentation does alleviate this problem as unit stats are displayed prominently at the cost of attractive artwork, but when your heart's climbing into your throat and you're flailing about like a mime off their Ritalin it's easy to lose track and overlook the details.

Watch out for the moody giant and the king in yellow.

Luckily everything internalizes rather quickly. You'll fully grasp the terrain rules and get a solid read on unit capabilities. Then you're hit with the strategy and spell cards.

These cards offer one time dramatic actions that break the rules or buff units in interesting ways. They let you charge across the battlefield or throw deadly bolts of lightning. The fugly Firebrand shaman can even raise a unit from the dead - poor goblins damned for eternity.

What's particularly satisfying is that players choose these cards privately before the game begins. Since much of the game comes down to spiraling but projected outcomes based on the player's decisions, an injection of drama and surprise adds a huge oomph to the experience.

All of this does threaten to overwhelm in your early days. This is partially contained due to the organic way play is compartmentalized. You will often have a great deal of sheer stuff vying for attention - units, cards, objectives - but the moment to moment focus of the game tends to be on a slice of the battlefield.

Since you are limited to only four sand timers you can't physically attend to the entire board. Instead you'll make smaller pushes into weaker pockets or respond tactically to slow the enemy approach. At times you will even have all four of your timers deployed and have nothing to physically do. This can feel deflating as the Ferrari sort of stalls out, writhing warriors paused mid blood lust. But it gives you momentary breathers to look back through your hand of cards and assess the enemy's strategy. It also gets downright tense as you eye an opponent's unit whose little colored granules are nearing their cessation. One of my favorite quirks of this game is the 'Raiders of the Lost Ark' where you let your hand hover above the board, poised to grasp a timer just as it empties and jump back into action.

Those moments of electric muscle as the hoof hits the mud and blood pressure soars are where Wartime makes it bed.

It's immediately clear this type of frantic yet mentally attentive design is not for everybody. Yet, for those whose desires overlap, this one will be a stone cold slayer with the smoothest karate chop action on the block.