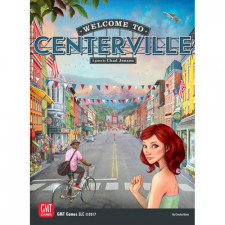 Roll your dice. Save the ones you want. Reroll the rest. Do this three times.

Sound familiar? If youâ€™ve played a dice game or two in the past decade, youâ€™ve encountered this formula ad nauseum. Itâ€™s not a bad formula though; there are worse ones you could copy. And Welcome to Centerville by Chad Jensen and GMT games does an admirable job, utilizing the mechanism to good effect. There are always lots of options, no matter what you roll, and even a bad roll can end up netting you something. Roll a lot of something you donâ€™t need and then face the difficult choice of rolling with it or else re-rolling to try to get the category youâ€™re really weak in.

You know the drill, and Centerville does this little jig with this best of them. 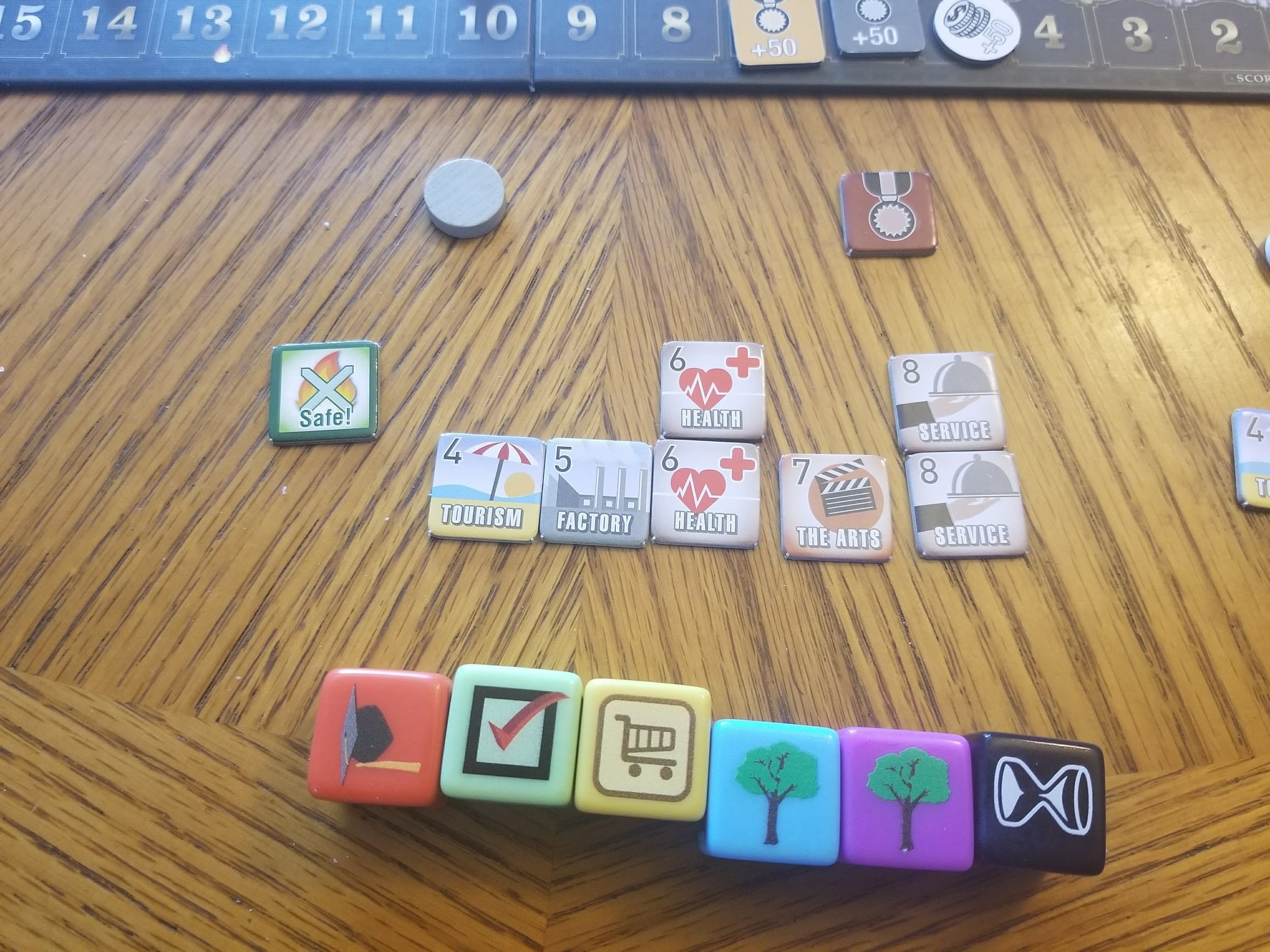 The gray player is collecting occupations like theyâ€™re going out of style.

Itâ€™s not the dice, then, that drag Centerville down into the slums. Games should be more than a scoring spreadsheet, and this is where Centerville falters. While building your little territories by placing cubes in the various neighborhoods of this Anytown, USA is enjoyable, the facade crumbles before long and weâ€™re just optimizing points in various categories. Weâ€™re balancing category A against category B against category C, and whoever balances the best wins the day. King of Tokyo is shallower than Centerville, and yet it engages us because weâ€™re rolling damage against our buddies to kick that confounded gorilla out of the city once again. Centerville makes no effort to draw you into its world with each roll of the die.

Thatâ€™s not to say these decisions arenâ€™t interesting. Trying to juggle your status, ecology, developments, political offices, lucrative river properties, occupations, and probably three or four Iâ€™m forgetting is a challenge that has its charms. Each of these areas will net you prestige or gold, and the lower of these two is your final score. Itâ€™s solid and well-balanced. It scratches the right itches and pushes the right buttons for this kind of game. But just check out all those scoring boxes I listed above: trying to score in each of these and keep them straight for three scoring rounds in a row simply becomes tedious rather than fun.

Compounding the problem is that Iâ€™m not sure whose shoes Iâ€™m supposed to be filling in this city building narrative. Iâ€™m running for office and building houses and helping the ecology andâ€¦ takingâ€¦ occupationâ€¦ tiles? Or something? The setting and theme just donâ€™t connect the way they do in my favorite city building games. Sure, youâ€™re usually cast as some omnipotent city building official, the equivalent of which doesnâ€™t exist in a free society, but here Iâ€™m not even sure what the little scoring chits, counters, and cubes even represent most of the time. 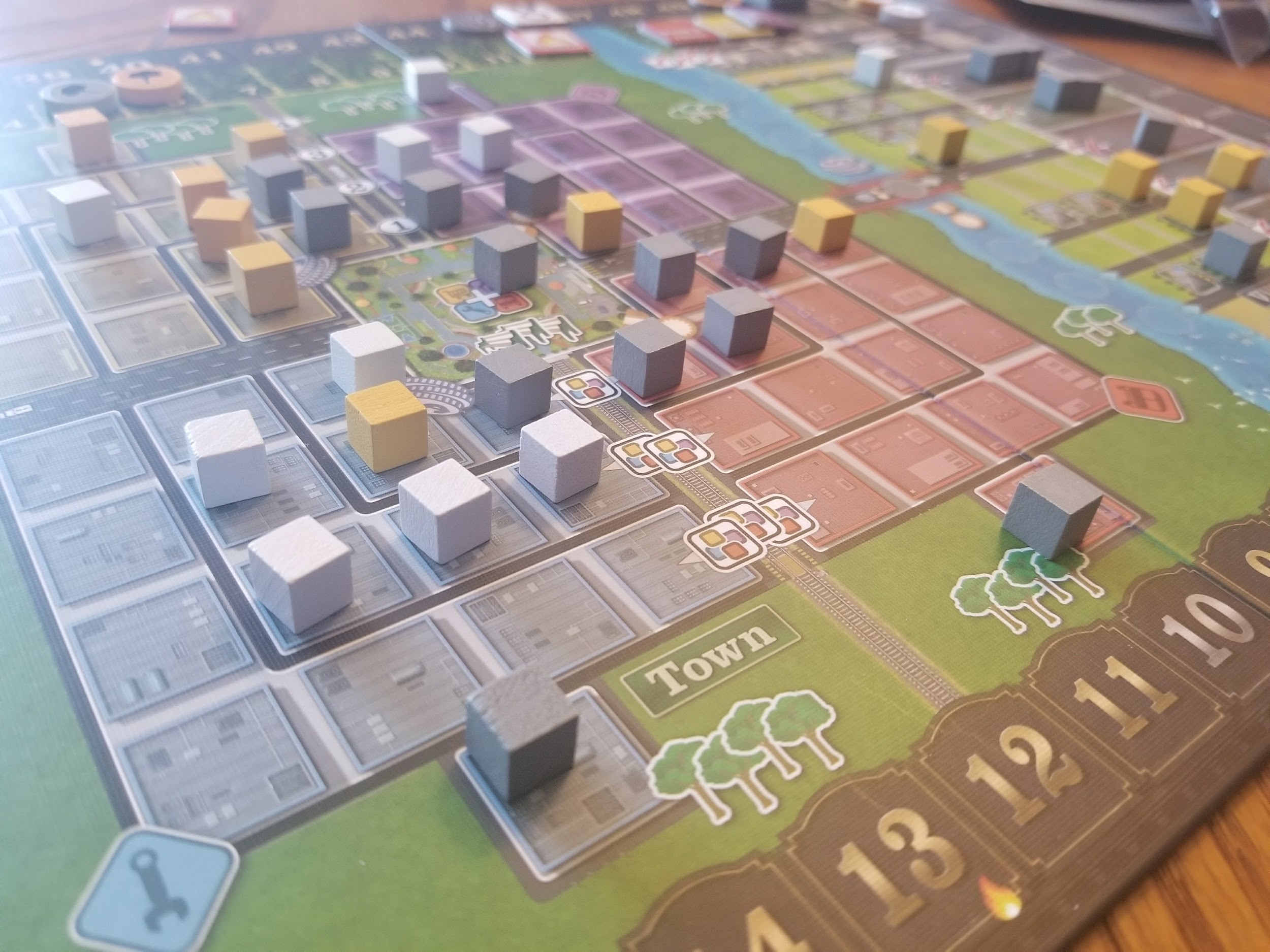 Cubes with all the variety of a cookie-cutter housing development

In Centervilleâ€™s favor, Jensen wrote a clear set of rules and an even better player aid. Once you peruse the book once you wonâ€™t have to return to it. You wonâ€™t be playing this game with your nose in the book looking up every exception, even though the game has a fair number of them. It plays a lot more smoothly than it should thanks to the excellent rulebook and clear graphical presentation. The way the pieces interact makes sense, and thereâ€™s no confusion as to how all the cogs come together to score you points, though youâ€™ll have to see a scoring round or two before youâ€™ll have any solid grasp of a workable strategy.

All this means I want to like Centerville. It tries to be charming, and GMT pulled out all the stops to make this an attractive mass market game. Its core design not broken or imbalanced or off-kilter in any way. If you like games where youâ€™re just juggling scoring opportunities, you might even enjoy this one. For me, its inability to ever connect its theme to its setting and rise above a simple scoring matrix means it is a few blocks short of a city.