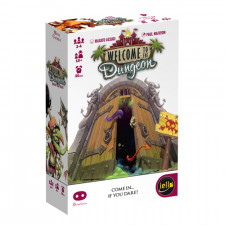 Welcome to the Dungeon Review

Love Letter has ushered in the age of microgames, and I donâ€™t think thatâ€™s necessarily a good thing. Designing a game with parameters in mind beyond the excitement and tension the player will face turn after turn is a recipe for disaster, or even worse, a boring game. For the most part, this is what we see in the microgame movement. â€œIsnâ€™t it awesome that this game works using only 7 cards and a paperclip?â€ Well, yeah, as a design experiment, that kind of thing can be neat, but microgames arenâ€™t usually the games I want to play for any length of time. Well color me shocked; Welcome to the Dungeon is the exception of all exceptions. Itâ€™s just a small stack of cards and a few tiles, yet it continues to surprise me with every play.

A group of adventurers stand around a menacing cavern entrance, daring one another to descend into its haunting depths. â€œI bet I can go in without a shield.â€

â€œYou guys are both wimps. I hear thereâ€™s a dragon waiting to devour us. Still want to be the lucky one?â€

I describe the game by its colorful narrative, but thereâ€™s really not much more to the mechanisms. Take away a piece of equipment, and stare down your opponents with that cocky grin of yours. Dare them to one-up you. Only you know that the enemy you just added to the dungeon is a total pushover, but that pile of unknown monsters is looking mighty threatening. Thereâ€™s no way theyâ€™ll outbid--

Dang it. They outbid you, and took away a piece of equipment while they were at it. Still want to enter the dungeon? It looked good just a turn or two ago, and now youâ€™re not so sure. You canâ€™t afford to be wrong, as two ill-fated trips into the depths will eliminate you from the game, while two successes for any player will spell victory.

What gives the game depth is its economical set of mechanisms. Thereâ€™s no complex bid structure or set of phases. You play or you pass--go all-in, put your money where your mouth is, or else fold in cowardice--no middle ground, no nuance to speak of. But if you play, youâ€™re forced to make it tougher on yourself, either by making the dungeon more dangerous or by taking precious items away from the central supply. This means every decision has myriad consequences, ones that you wonâ€™t fully understand until youâ€™ve played a few times.

Early rounds can be uneventful, as players simply stack up the dungeon and remove a piece of equipment or two. But the experienced dungeon diver will capitalize on the first few plays, gathering information and watching carefully what the opponents do. Did they take away the torch because they know the dungeon is filled with enemies that would have run away before its flickering light, or did they know it was worthless anyway, and are simply hoping youâ€™ll bail so they can take all the glory? Itâ€™s one of those smart, bare designs where the rules are an aside to the real game of reading your opponents well.

Those slow opening turns only serve to enhance the tension once things become a little less certain. Just last turn, you were absolutely sure you could have made it through the darkness, and nowâ€¦ now, things arenâ€™t looking so bright. But thereâ€™s still a decent chance the dungeon is doable, so you canâ€™t pass to your opponent. So youâ€™ve got to one-up everyone else and make the dungeon look impossible, even though you know youâ€™ll probably succeed.

And youâ€™ve got to do all this with one action: pass or play. There are echoes of some of my favorite designs in here, where you are presented with a simple choice with consequences that stretch off in all directions. Some choices may be obvious, but when the game reaches the crucial tipping point, where youâ€™re just 90% sure youâ€™re making the right call, thatâ€™s when it really sings. Itâ€™s all or nothing, and itâ€™s all up to you.

The opaqueness of the strategy, especially in the first few rounds and throughout the first few times you play, means this actually may not work very well as a â€œgatewayâ€ game, despite the easy, economical set of rules. The decision to make the dungeon harder or make the hero weaker can be vexing, since players won't actually know if theyâ€™ll be facing the horrors they place in the dungeon deck. Still, give the game some time to breathe, and I think newer groups will catch on just fine.

Rare is the microgame that catches my attention, but Welcome to the Dungeon seems to have done it. It makes auctions personal as players stare one another down, seeing who will flinch. It packs a real game in a short time frame and few components, but manages to offer something unique without paring down the experience to almost nothing.