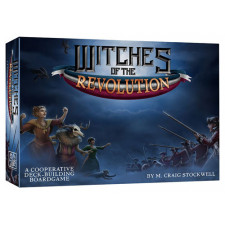 Witches of the Revolution Review

You know about the Sons and Daughters of Liberty, but have you heard of the Coven of Liberty? Did you know that Paul Revere was a lycanthrope, Benjamin Franklin was a revenant, and George Washington only crossed the Delaware with the aid of a grateful naiad? This playful blend of the supernatural and the historical is the premise for Witches of the Revolution, the cooperative deckbuilding card game from Atlas Games.

Donâ€™t get too excited about the theme, though; it doesnâ€™t float. When you hear â€œdeckbuilding card game,â€ you probably think of oodles of card text and synergistic special abilities with deep combo potential. This school of design has dominated the deckbuilding scene since Dominion. Witches of the Revolution, however, belongs to a new school of minimalist deckbuilding Ã¡ la Big Book of Madness. 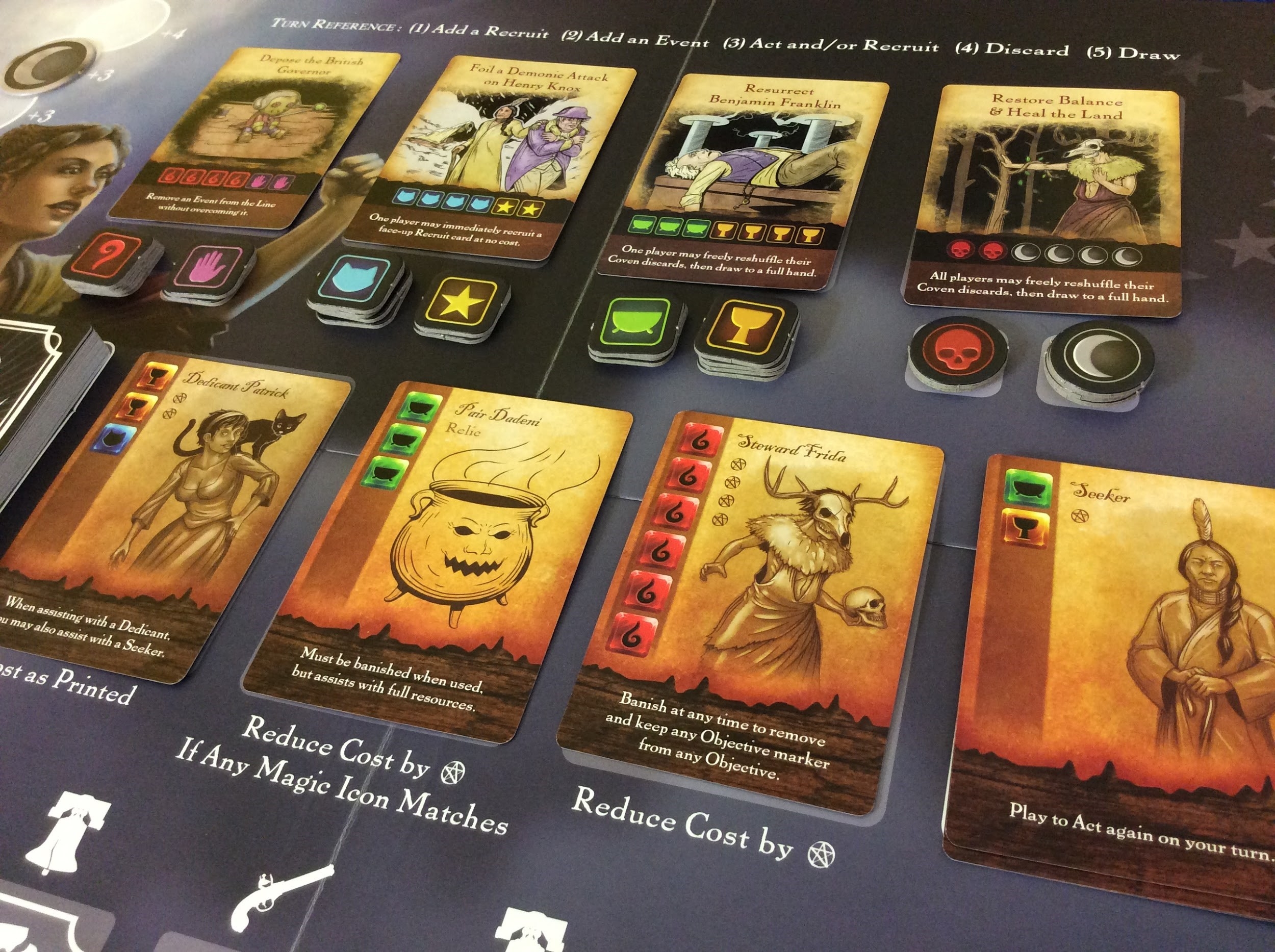 Itâ€™s all in the icons.

In Witches, the main thing distinguishing one card from the next is not its text but its icons. There are six magic types: brewing (as in potions, not Sam Adams), channeling, enchanting, hexing, rituals, and familiars. The ultimate goal is to remove all of the objective tokens from your four objectives by overcoming events with matching icons, and overcoming events requires playing cards with matching icons, bing bong boom. You typically have a choice; for instance, putting down a troublesome wendigo requires either four hexes or five familiars. If you canâ€™t quite make it on your own, other players can assist you by playing one witch each, but each witch played in this way only contributes one of its printed icons.

Thatâ€™s where the special abilities come in. There are really only five types of witches: Seekers, which make up your starting deck, have two icons of differing types and can be discarded to overcome a second (or third, et cetera) event on your turn; dedicants have three icons, two of one type and one of another, and break the â€œone witch per assistâ€ rule; relics have three icons of one type and break the â€œone icon per assistâ€ rule; celebrants have four icons of a matching type and give other players a bonus assisting you; finally, stewards boast a whopping six matching icons and have an ability thatâ€™s entirely unrelated to assisting: you can banish them to take an objective token from one of your objectives, bringing you one step closer to liberty and victory.

These card types form a circle of power and flexibility. Stewards can single-handedly overcome many events, but all their power is wasted when assisting other players. The â€œweakerâ€ cards place more emphasis on teamwork and versatility. Actually, all card types are useful, a fact reinforced by the events: some donâ€™t let you play stewards, others can only be overcome by seekers and relics, still others require all your icons to come from only two cards, and some events turn off assisting altogether. And you must strategize to ensure your deck retains its flexibility as you power up; unlike in most deckbuilders, cards spent to recruit new witches are banished from play, not discarded. Purging your entire deck of seekers can leave you unprepared to deal with events as they transpire.

All events have some bad effect, whether itâ€™s a passive restriction or an immediate â€œWhen Flippedâ€ effect. Two specific event types have further impact when pushed past certain spaces on the board to make room for new events entering play: Liberty events, associated with the ongoing war, push the Liberty track down toward Tyranny, making recruiting more difficult and potentially triggering a loss condition, while Peril events, associated with witch hunts and superstition, banish potential recruits from play. Catastrophic events have lingering effects as long as theyâ€™re in play, and letting events pile up triggers another loss condition.

Assisting balances the game at different player counts. With fewer players, you can get more powerful witches into your deck earlier, but youâ€™re more reliant on your own deck to produce the icons you need. With more players, your deck evolves more slowly, but you can rely on the coven to fill in the gaps. Too much assisting, however, can leave a playerâ€™s hand small and ineffectual. It also means youâ€™ll be drawing more cards at the end of your turn, which is a big deal because youâ€™re heavily penalized for having to reshuffle your deck: a new event enters play and the Moon track advances, making events more challenging to overcome as the witchesâ€™ power wanes. Players can strategically choose not to refill their hands, averting the catastrophic effect of having several reshuffles occur in close proximity but leaving them helpless in coming turns. 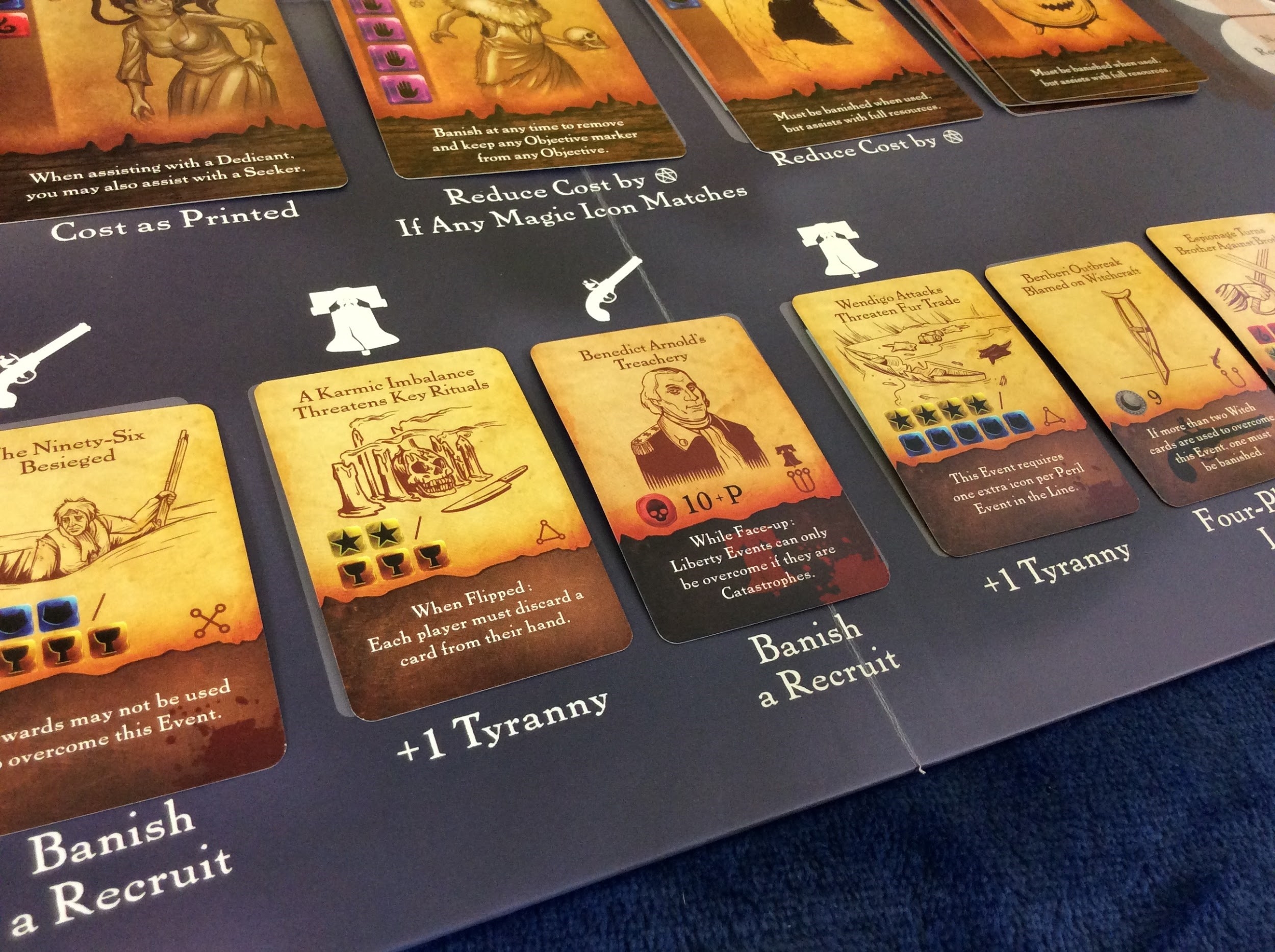 The events blend the historical and the occult.

In this way, Witches of the Revolution shifts the strategic focus from deckbuilding to hand management. Itâ€™s not so much about which cards you buy as when you play them. Timing of achieving objectives is also critical, since these give powerful, one-off benefits like free reshuffles. Unfortunately, the game at the recommended introductory level is just too easy for these strategic nuances to shine through. There are two complete event decks in the box representing the two extreme difficulty levels. To achieve an intermediate difficult without unbalancing the game, you will need to sort, select, and remix these decks following a process even more tedious than the typical deckbuilding setup. Luckily, once you hit on a good balance, you can play the same event deck for several games in a row before it becomes stale.

With its text-light philosophy and captivating theme, Witches of the Revolution would make a strong introduction to deckbuilding, but at times it feels like the introductory version of a better game. Things like the event track feel underutilized, and recruiting doesnâ€™t offer interesting enough choices. If you can manage your expectations and overcome the fiddly difficulty settings, though, Witches is a hexing good time.