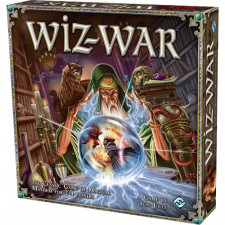 There are plenty of games in which players take on the roles of battling spell casters, where the end game focus is to barbecue your rival with a fireball or crush your opponent under the fist of a summoned stone elemental. Wiz-War is the granddaddy of those games, outdating even the most popular of spell-dueling card games by a solid ten years. Currently in its eighth iteration, it brings all the bells and whistles to the game table in a spread of cardboard and plastic that is absolutely gorgeous to look at. So when a board game is in its eighth edition, you really have to assume that theyâ€™ve gotten everything fine-tuned to perfection when it comes to gameplay. Right?

Wiz-War is the kind of game that feels incomplete when youâ€™re not playing with the full complement of four players, which can be bumped up to five and six with expansions. It is certainly worth breaking out on a four-person game night, but at a table for two it lacks the variety and chaos that makes Wiz-War really shine. There's just that certain something missing mechanically when it comes to a one-on-one duel, and it doesn't quite provide the same ridiculous and entertaining game as a four-person-free-for-all.

Second, it can be a slog. The goal of the game is to either capture two other playersâ€™ treasures from their starting tile and deliver them to your own starting tile before anyone else does the same, or to reduce two other players from 15 life points to zeroâ€”in a game where most offensive spells deal an average of two or three points of damage. You can also win with a combination of kills and treasures.

The slog comes when almost every deviously deadly spell you drop on an opponent is foiled by a magical shield, wall of granite, or countless other counterspells that seem more prevalent in the game than effects that cause harm. While this lends itself fairly well to a play style where you're often on the defensive and running away from opponents with a treasure chest in tow, it's counter-intuitive to the player-versus-player, explode-them-all, heavy conflict theme that is artistically plastered on every spell card.

â€œIgnore the treasures and kill everyoneâ€ tends to be a popular Wiz-War strategy in my own experience, despite the seemingly endless onslaught of nullification effects that make a wizardâ€™s attacks fizzle. This is because once youâ€™ve delivered a chest thatâ€™s brimming with gold and jewels to the depths of your personal hidey-hole, it can be stolen away by another player while youâ€™re out getting the fifteen-finger-discountâ€”thanks to your extra magical handâ€”on your second box of loot. And wouldnâ€™t you rather be blasting the competition with lightning bolts and conjuring exploding rune stones than running around a maze like a rat that needs his cheese fix?

One of the greatest joys in this mad scramble for mystical supremacy is finding combinations of spells that can give you a major advantage. Whether it's a speed boost and an Energy card that's burned to rocket you back to your lair with a precious treasure or a pair of granite walls placed strategically in a corridor to trap your enemy in his own Office Space-style nightmare cubicle, there's few things more satisfying during a round of Wiz-War than throwing down a fistful of cards that all work in tandem to screw your competition. And in the end that's really what Wiz-War is all about: finding the very best way to strip your friends of their wizardly dignity and any hope of winning.

Colorful analogies aside, it is worth noting that this is one of the most cutthroat and vicious games I've ever played. If you're squeamish about playing a card that steals away an opponent's resource cube or feel horrible about yourself for a week after depriving a player of their next turn, beware! Once you've drawn your hand of spells and set off into the maze, it's every man, woman, and werewolf for themselves.

Despite the slog and assuming you've got an appropriate player count, there is no denying that Wiz-War is a ton of fun; there's a reason it has stayed popular for decades while other great titles have come and gone. It's the sort of game where brief alliances are forged in the heat of magically-conjured lava rivers, only to be broken by an enchanted dagger straight into the back of a â€œfriendâ€ just one turn later. Razor-sharp icicles are hurled alongside heated and horrible epithets, and in the end probably more than one wizard is going to end up a smoldering corpse or greasy smear across the labyrinth floor.

It's a classic. And with good reason. While some parts of this machine aren't as well-oiled and perfected as players may like, the core of Wiz-War is easy to learn and fun to play in a â€œbeer and pretzelsâ€ kind of wayâ€”there's no brain-burning plotting three turns ahead or careful, political negotiations. Just cross your fingers that the proverbial, and literal, cards are in your favor and charge into battle with spells blazing!