I have a dream. A dream of a word game in which mellifluous and luminescence score better than zuz or qat. I dream of Wordsy (with the light brown cards).

In my other life, I teach high school students how to write essays. One of the most difficult lessons to get into their heads is the value of concision. Since kindergarten, weâ€™re rewarded for learning and using longer and more complex words, sentences, and paragraphs. The end result is a bunch of college freshman essays that read like a thesaurus vomited onto a crossword puzzle.

Weirdly, most word games incentivize the opposite...which is a real shame, since polysyllabic words (used properly, of course) are just more fun. Iâ€™m a logophile, and thereâ€™s nothing more thrilling than seeing a master wordsmith bring a superlative vocabulary to bear. Itâ€™s always frustrated me that games like Scrabble donâ€™t actually improve your working vocabulary. They train a Scrabble vocabulary: those high-scoring, two-letter clutch words like za and xi.

Wordsy, by Gil Hova (The Networks), is the word game for people who actually love words. Itâ€™s a reimplementation of his game Prolix, streamlining the rules and replacing Prolixâ€™s tile bag with a deck of cards, but the core concept is the same: players compete in real time to create words including (but not limited to) a shifting display of consonants. Some rare letters are worth a few bonus points, but the primary consideration is using as many of the available letters as possible, often in a sesquipedalian exhibition of linguistic erudition.

Each round, Wordsyâ€™s letter cards, which contain only consonants, fill up an 8-card grid of two rows by four columns. The value of each letter is determined by its column, with newly arrived letters in the leftmost column worth five points each and imminently departing cards in the rightmost column scoring only two. Once all the letters are revealed, everybody simultaneously endeavors to discover the preeminent word, that being the one that uses the most and the highest-value consonants available. They can pad out their word with any additional letters they want, but only the consonants on display are scored, making vowel-rich words like â€œqueueingâ€ a generally poor choice. Once everybodyâ€™s words are written and scored, the two rightmost letters slide out of play, everything else shifts to the right, and two new letters are drawn to fill the leftmost slots. 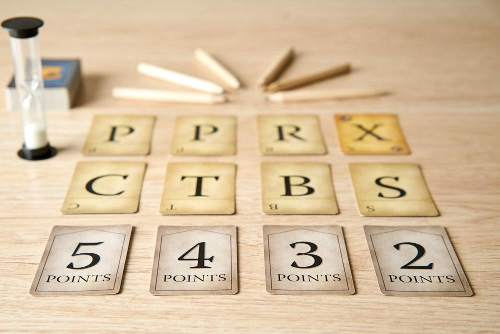 In this example, I can find â€œapperceptionsâ€ for 23 points. Can you do better?

This simultaneous play replaces Prolixâ€™s real-time mechanism, which was a hotseat-style design with the ability to â€œinterruptâ€ other playersâ€™ turns. At first, I was sad to see the interrupts go, as they added an interesting tension to the game--your interrupts replaced your lowest-scoring words but suffered a point penalty, so players who interrupted too frequently might find themselves actually decreasing their overall score. Wordsyâ€™s system, however, removes any advantage the active player might have gotten from a particularly easy â€œflopâ€ of letters, since now everyone is working with the same set of letters all the time. It also feels less antagonistic without significantly reducing player interaction.

The old system inculcated equilibrium of speed and accuracy: you wanted to get your word out before two interrupts ended your turn with a score of zero, but you also wanted that word to be a high-scoring one. Wordsy accomplishes the same thing with a clever â€œfastest playerâ€ system. Whoever decides on a word first gets to grab the sand timer, putting the competition on a deadline. But at the end of the round, everybody elseâ€™s words get compared with the fastest playerâ€™s, and bonus points are awarded accordingly. If the fastest player also had the best word, they get a small bonus; otherwise, everybody whose word scored higher than the fastest playerâ€™s shares a bonus, instead. Boggle might be a closer analogy, but it reminds me of Galaxy Truckerâ€™s real-time shipbuilding. This mostly works well, except for one weird rule that the same player canâ€™t be fastest player multiple turns in a row, possibly to prevent one person from running away with or intentionally spoiling the game. So in some rounds, the â€œfastest playerâ€ is actually the second fastest.

There are some restrictions on which words you can use--notably, Wordsy doesnâ€™t allow alternative formations, conjugations, pluralization, or tenses of words used in a previous round, which the rules designate â€œcheapies.â€ Thereâ€™s also a solo variant that works surprisingly well.

Wordsy doesnâ€™t try to reinvent the genre to make it more palatable to strategy gamers, as the deckbuilding Paperback or the stock trading Letter Tycoon do. Wordsy is an unadulterated word game, but itâ€™s both faster and more satisfying than mass-market offerings like Scrabble and Boggle. If Iâ€™m in the mood for word-forming fun, this is the box Iâ€™ll grab every time.