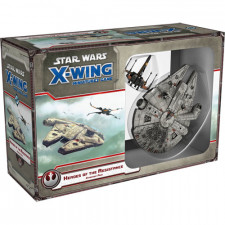 It's been a long time coming but it finally feels like we have a definitive release that brings The Force Awakens into X-Wing. Fantasy Flight Games has done a solid job in bringing in the new ships with the second core set and First Order TIE expansions, but those inclusions were developed partially in the dark. I criticized the Force Awakens core in particular for lacking solid character choices and offering a diminished Poe Dameron (Pilot Skill 8, really?).

Heroes of the Resistance rectifies the wrongdoings and hits us right in the heart with Rey, Finn, and geriatric-but still effective-versions of Chewbacca and Kylo Ren's curmudgeonly father. Yeah, sorry, I guess I just spoiled that for all of you mynocks that haven't seen the "new" film yet.

Let's talk about the miniatures first. The YT-1300 sized elephant in the room is clearly the Millennium Falcon. It has a new rectangular dish and many subtle physical distinctions almost no one will recognize. Being sold such a similar model to one everyone and their grandmother already possesses is a bit of a downer, but on the very bright side the miniature actually has engine glow. This is the first release for this game with the bright blue feature and it is somewhat spectacular looking on the table top. Crank it up like a rave and bring on the glow I say.

Poe's X-Wing pulses with the seething brilliance of the dark black void. Its contours smooth and classy with orange flair placed in just the right spots. Whew, sorry. The beauty of this miniature is clearly getting to me. It just looks gorgeous.

The builds, options, and synergies afforded by this expansion match the sheer elegance of Dameron's spacecraft. The first thing you'll notice are the familiar faces of the Resistance. Rey is perhaps the strongest pilot in this release as she offers an outstanding ability to re-roll up to two dice offensively or defensively when the enemy is in her firing arc. The real kicker here is how well it thematically combos with the new Millennium Falcon title and crew member Finn.

The title adds maneuverability as you can rotate your ship 180 degrees if you end a three speed bank and are not touching another ship. This allows you to swing about and bring your guns and abilities to bear. Finn is interesting because his ability is useless in a vacuum (try not to giggle). He adds a blank result to your roll when the enemy is in your arc which perfectly combos with Rey. It's almost as if the two were made for each other. 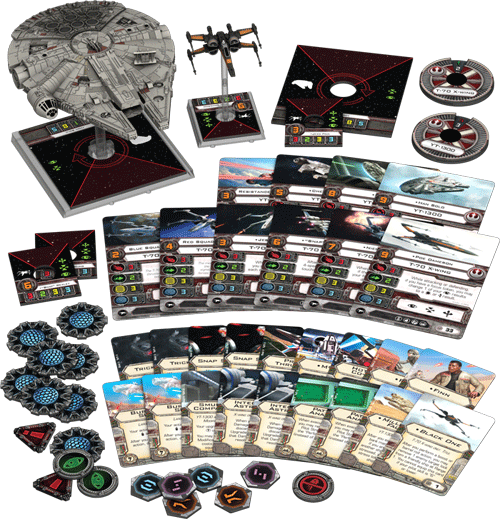 Chewbacca is also a standout as when a friendly ship bites it he slips into Wookie rage, which is one degree worse than roid rage. This allows for some unique build options as you try to capitalize on glass cannons and weak filler for huge rounds of unrelenting volleys. He synergizes well with most rebel playstyles and has widespread appeal.

Han's ability is just as slick, allowing him to start beyond the standard deployment zone as long as he's three distance away from any enemies. Because his pilot skill is so high and he is placed near the end of setup, this provides a ton of fun options. You can shelter him on the flank in a cluster of asteroids or prepare him for a quick initial attack run on a key cog in the Imperial machine. This ability is even better in Epic mode with huge amounts of debris and obstacles on the table and such a wide surface. Overall, this version of Han Solo may be my favorite ship in the entirety of X-Wing.

Couple the excellence of Han with the Smuggler Compartment upgrade for the Falcon and you have one of the most fun combinations you can possibly field. This allows you to equip an illicit upgrade for maximum shenanigans. The new Burnout SLAM lets you perform its namesake's action a single time. At only a point it's a clever little trick up your sleeve that's very exciting. You can even mainline some Glitterstim or eject cargo tokens. Simply awesome.

The ability and combos of the Resistance Falcon in conjunction with the correction of Poe's skill to appropriate effectiveness really highlights the strengths of this release. It's all about fun. Joy pushes through as you can pull off neat tricks and effective maneuvers which feel so great to employ. There's not a huge emphasis on minor tweaks and mathing out squad structures, rather, it's all about them feels. It hits you hard with that nostalgia leaning fun factor that the films grabbed a hold of and makes your cheeks flush.

X-Wing to me is all about fun and this minor release overshadows Wave IX because it nails the essence of X-Wing. It re-aligns the feel of the game with film emphasized narrative and expertly designed mechanisms. It brings back that cinematic glory and it purely succeeds for all the right reasons.