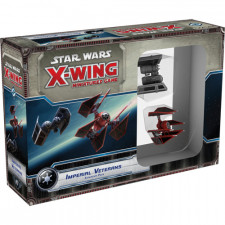 Fantasy Flight has gotten into this rhythm of splitting cardinal waves with understated veteran/aces packs that typically slip in some key upgrades. Their design team takes advantage of these smaller releases to even out wrinkles and smooth balance. Thus far, this methodology has proven quite effective at giving purpose to ships that had previously been gathering Tatooine dust.

The Imperial Veterans pack brings some much needed love to the deprecated TIE Bomber and TIE Defender. While the Bomber had a short stint of experimentation, the Defender never really took off and arrived with a bit of a whimper. Itâ€™s a powerful ship indeed, boasting nice attack with a hardy body, but its point cost is simply too high for what it brings when judged against comparables. Thatâ€™s a death knell in a game whose play resides around building and customizing squadrons to thwart your competition.

To fix these deficiencies we have some new Defender pilots that tease some promise. Thereâ€™s a couple of generics that are a slightly better deal due to increased pilot skill in relation to points and the stellar Countess Ryad who can change a straight into a K-turn at will. Flying up the gut and jamming like youâ€™re in a joust with great flexibility is a hoot.

The final Defender pilot is a familiar face as Marek Steele (previously seen in the TIE Advanced) makes a return. His ability is the same but heâ€™s in a more potent vessel capable of more drastic upgrades. His draw three choose one critical effect is also more powerful with the revised damage deck from the Force Awakens set, which is nice.

The Bomber side is more interesting. Tomax Bren is my favorite pilot in the bunch as you re-use a discarded elite pilot talent. This means you can take advantage of the included Crack Shot upgrade twice, nerfing opponentâ€™s defenses and delivering pain with ordnance.

â€œDeathfireâ€ is pretty slick, dropping bombs as a free action while only costing 17 points. The ability to unload them after you perform your action or reveal your maneuver wheel also allows you more leeway in targeting, which is very nice. Loading up a spacecraft with a huge suite of ordnance is almost never as effective as you want, but itâ€™s always a heck of a lot of fun. 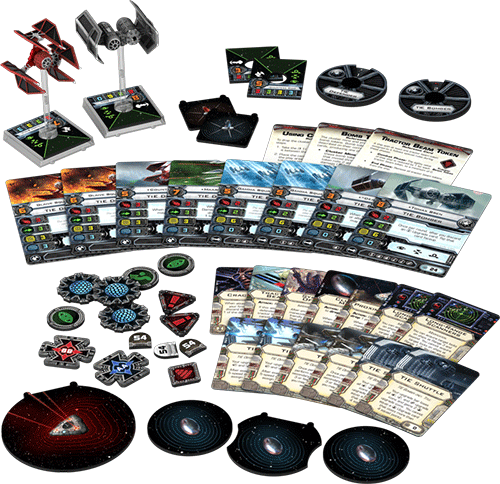 New upgrade cards are always the primary reason to pick these aces packs up if youâ€™re looking for new content. The three new titles found here are excellent. The TIE/x7 Defender cancels out your weapon upgrade slots but lets you perform free evades if youâ€™re moving fast. With a three attack native cannon this isnâ€™t a horrible tradeoff at all and allows you to eke out an increase in survivability. Oh, it also costs -2 points, yes it actually saves you precious squad currency.

The TIE/D allows for a one-two punch of cannon secondary weapon fire followed by the main blasters. I really dig the restriction of the cannon being three or fewer squad points as it gives incentive to stay away from the overused Heavy Laser Cannon. The Bomber boasts the single most interesting card in this expansion with the TIE Shuttle. You sacrifice all of your ordnance icons from the upgrade bar but can instead stow away two crew members of four points or less. This synergizes extremely well with Captain Jonus who is a popular choice as a support vessel. You can throw on good olâ€™ Agent Kallus or even the Fleet Officer.

The big gain here is that it allows you an option of filling that role the Lambda Shuttle provides with some new alternatives. I donâ€™t think a shuttle Bomber is strictly better, but itâ€™s flexibility thatâ€™s greatly appreciated.

Weâ€™re also given a ton more tokens (the cluster mines were needed in a bad way) and another tractor beam. Those are just nice extras as the real gain here is more flexibility and subtle options to list building. The X-Wing design team again proves they are up to the challenge of providing tweaks and finding space in the congested star field to maneuver. The Veterans pack is far from a necessity, but itâ€™s a release that players who love ordnance in their Imperial lists will value highly. I for one am ready to hit the throttle and pull the release lever to rain brimstone on Rebel scum.