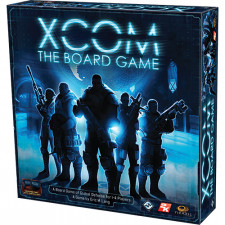 XCOM: The Board Game Review

You can count me among the folks that naysayed Fantasy Flightâ€™s XCOM, based on the popular strategy video game, before it ever hit my table. I thought the concept was misguided, focusing on the big-picture resource management side of the game rather than the boots-on-the-ground tactical element. I thought the IOS/Android/Web app that drives the game sounded more like a gimmicky replacement for a deck of cards or a chart than something more progressive or innovative. I also felt like XCOM was already so indebted to tabletop-style design that a physical game was somewhat redundant. I was not, however, among the detractors worried about smartphones suddenly becoming obsolete, rendering the game unplayable. I mean, come on.

The specter of obsolescence thus dispelled, there was a lot of commotion over XCOMâ€™s release and the unfortunate side effect of the drama is that the fact that Eric Langâ€™s design is one of the most fun to play co-op games in recent years was obscured. Itâ€™s not quite a masterpiece and itâ€™s still a touch too ordinary to represent any kind of profound, messianic-like comingling of physical and video games. But it is an accessible, appealing title with a couple of neat tricks up its sleeve to dress up a really quite obnoxious push-your-luck dice game.

Langâ€™s design takes some cues from recent real-time designs such as Space Alert and Space Cadets. The gameplay is completely asymmetrical, with each player taking on a different role that has unique functions and processes. You become the top brass that run XCOM in its fight against the worldwide alien menace. Success requires careful management of scarce resources, triaging a rising tide of threats around the globe and a tremendous amount of luck- luck that can be mitigated with teamwork and making tough do-or-die decisions virtually every turn.

The controversial app not only runs the game, it replaces the rulebook. There is just a basic setup guide in the box. It even teaches you and your friends how to play step-by-step through a tutorial game that walks through every step and introduces every role, concept and phase. Itâ€™s easy to use and it gets you into a full game literally minutes after opening the box. Be a luddite all you want, but this is actually quite an awesome implementation of easy-to-use technology that not only drives the game but functions as an always-on rules resource that can be checked at a touch.

During play, the app functions as something of a cross between a gamemaster and a timekeeper. The first half of each round is a timed phase which unspools turn phases in a seemingly random (or is it?) order. Each player is called on during specific phases to enact the function of the role that theyâ€™ve selected. The Central Officer controls the app and can put out satellites to try to shoot down UFOs in orbit, before they enter the atmosphere. They also can use a scanner in the app to see a UFO forecast of sorts. The Commander has to handle the budget while also mitigating crises and scrambling air power to try to down UFOs over each continent by placing one to three Interceptors in the hot spots. The Chief Scientist can place a research card in a slot and then put one to three scientists to work on mastering the particular technology. The Squad Leader sends out troops on missions that could net rewards and favor among the funding nations if its completed, but there is also the defense of the XCOM base to consider. The catch to all of the above is that each turn has a set budget and each placement of a resource costs a dollar of that always-not-enough pool, and buying new Interceptors or troops is only possible if you come in under budget. Sure, you can willfully blow it if it makes strategic sense- but you risk upsetting your international financiers.

During this timed phase, UFOs may appear or event cards may be added to a stack to be resolved during the resolution phase. There may also be opportunities for players to use technology cards and special cards related to their station. All the while, the timer ticks down until the entire sequence is complete and the game enters a more traditional turn-based stage where all of those resources that were placed turn into die rolls.

Each feature on the board- the research slots, the world map showing where Interceptors are battling UFOs, the mission card and the base defense area- are effectively tasks and each assigned resource adds one die to a roll to attempt to complete that task. So three Interceptors hunting one UFO need to role at least one XCOM shield on a 3D6 roll to shoot it down. Technology research requires multiple successes and tasks involving troops take into account specializations and upgrades that may add dice. But oh boy, is there a stinger attached to this mechanic.

You can keep rolling failed checks as many times as you want, but along with your roll you always throw an eight-sided die with the rest of your dice. And if that Alien die comes up with a number less than or equal to the number of attempts you are on, you might have gotten those successes you need but youâ€™ve also lost the scientists, satellites, Interceptors or troops assigned to it. This is a simple push-your-luck mechanic that allows for taking risks. And yes, you will always roll the one at the WORST possible moment.

It seems hugely unfair and unbalanced at first, but this mechanic is almost what sells the game. Because you can take those risks, you get those heroic last chance efforts where you lost the squad, but you also held off the aliens from destroying the base and ending the game. You also get those â€œcanâ€™t failâ€ moments that do, in fact, fail. Outgoing gamers will find that this is a design that will cause cheering, cussing, high-fiving and possibly chair throwing.

It is definitely not a luck-driven game, regardless of the die rolling or the seemingly random way in which the game deals out punitive events, almost seeming to know when it can hurt you the most. There is a lot to consider strategically, especially in regards to how to manage the Terror Levels of each of the funding nations. Tough decisions have to be made- help Europe out and watch the US go into the red? Or try to focus all of your interception efforts and mission decisions to bail out UFO-plagued China? Figure in the turn-by-turn budget and the multilayer resource allocation scheme and youâ€™ve got a game that manages to split the difference between seat-of-the-pants real time and luck-driven elements and a larger scope, strategic level design that absolutely demands cooperation between these four distinct stations.

Does it feel like XCOM? Yeah, I think it does. Even the highly abstracted combat aspect manages to capture that element from the video game when everything goes pear-shaped and you wind up losing your squad. The zoomed-out management part of the game feels very much like an extrapolation of those elements that were present in the video game design. I donâ€™t think fans will be disappointed in Mr. Langâ€™s efforts to express the kinds of things that have made it a classic on PC and more recently on IOS and consoles.

I want to believe in this game, after prematurely dismissing it. And I do believe in it, even though Iâ€™m not sure it will ultimately be the game lauded as the one that bridged the digital divide between the tabletop and the touchscreen. Itâ€™s still tentative, and it still feels like there is untapped or underexplored potential in what this app can do. But taken as a board game design, it is one of the more compelling and possibly innovative titles on the market today.