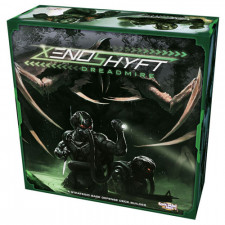 XenoShyft was a sea change in both cooperative and deck-building games, a massive shift (pun intended) in expectations to the scale of a Noachian Deluge. Laughing in the face of deck-building conventions, XenoShyft's designers made a game where resource cards (here called Xenosathem) arrived couldn't be purchased but instead arrived via drip-feed, upgrading themselves automatically as the game went on; where you could purchase cards for other players' decks; where action chaining and bonus draws were all but nonexistent; and where your only goal was surviving to the next round. In my review of XenoShyft: Onlsaught, I found fault with certain component shortages and a perceived lack of variability but ultimately found the game refreshing and addictive enough to earn a coveted 5 stars, concluding that "if you think of deck-building in terms of Dominion or Ascension clones, XenoShyft will seem as alien as its predators." 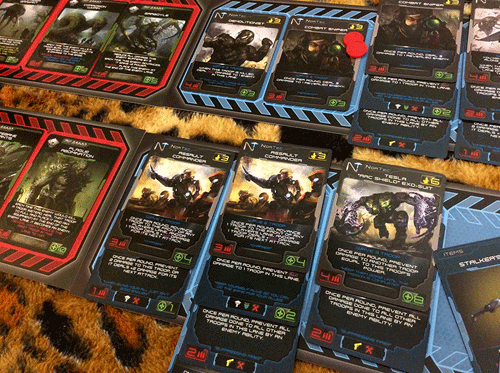 Cooperative lane-based base defense deck-building combat is back, baby.

XenoShyft: Dreadmire is a standalone expansion in the grand tradition of deck-building games. If you're expecting the same kind of slate-cleaning, nuke-the-site-from-orbit innovation as the first game offered, you'll be disappointed, as Dreadmire is mostly content to refine rather than redefine. However, the changes it does bring are generally for the better. If Onslaught was a tempestuous journey into uncharted waters, Dreadmire is a pleasant afternoon on the family yacht.

This is a bit ironic, given the monsoon-drenched new setting. The first XenoShyft was all about blast mining the core of a rocky planet filled with bug-like alien pests; as you drilled deeper and found larger stores of Xenosathem, the buggers got nastier and the suicidally frugal NorTec Corporation "authorized" the use of more advanced troops and weaponry in three increasingly explosive waves. Dreadmire keeps the three-wave system but shifts the setting to Genesis VII, a swampy planet with its own Xenosathem-mutated critters that have evolved to adapt to the constantly changing weather.

Mechanically, the new weather deck is now a driving force of the action. At the start of each round, the players will reveal the weather conditions for the upcoming fight. Nearly every enemy in the new Brood deck unlocks new abilities when specific weather conditions are present. For example, the Strangleroot Hulk gains extra damage resistance in monsoon conditions, while the Ambush Mantis hides in the back of the lane when fog is present, getting more opportunities to use its sneak-attack abilities. Some of the new NorTec equipment takes advantage of the weather, too, like an arc lightning gauntlet that works better in the rain. 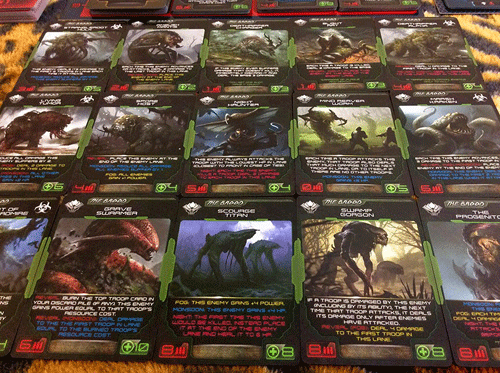 The other major change in Dreadmire isn't even new content but is instead a change in pacing. Originally, every onslaught in a wave was equally devastating, with one or two wave bosses making a random appearance (or not) at some point. This didn't match up with the players' continually growing strength, and Dreadmire's solution is a little more fiddly but a lot more balanced. Now, the first attack of each wave pits players against only three enemies each, the second attack has the standard four-enemy lane, and the bosses won't show up until the third, climactic battle. This is a major improvement that can and should be retrofitted into the Onslaught ruleset whether or not you own this set.

Every other revision is small potatoes. There are new troops for each wave, most of them versions of the Onslaught troops with a few more HP here, a slightly different ability there. The new weaponry, similarly, is mainly differentiated by its Greek mythology-inspired codenames, not its mechanical function. Divisions, which offer player-specific powers, have been completely redesigned, stripping out the complexity and gradual unlock of new powers in favor of a blanket discount and a single, scaling power. It's a good idea on paper, but in practice the new divisions feel watered down and almost universally less interesting than the original ones. Most wave 2 division powers in Onslaught gave bonuses for playing certain types of equipment, giving that player a deck-building focus, while the new ones are just bland once-per-round damage-dealing or -prevention abilities.

This is actually a major issue because it highlights the biggest flaw that Dreadmire failed to address: while there's a decent variety of equipment and three new troops for each wave, there's no real justification for purchasing one card over another without knowing which enemies are coming. The weather cards seem like they would help, but until you get to know the Brood intimately, they won't tell you enough to affect your strategy. This is what the division cards did initially, and if they railroaded players into a specific strategy, at least they made each role feel unique.

As a standalone game, Dreadmire works just as well as Onslaught, and the weather conditions and balance tweaks refine the experience greatly. As an expansion, it certainly adds variety where it was most lacking beforeâ€”there are now 6 troops to choose from per wave instead of a static 3â€”but since the new troops are mostly versions of the old ones, the difference is mild at best. Dreadmire is most notable for the innovations it fails to make: troop variety (without mixing sets) is still nil, deck-building is even more unfocused and circumstantial, and some of the most fun features, like elite troops, are still locked away behind Kickstarter bonus content.