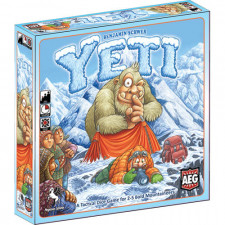 I donâ€™t know what the allure of the hunt for Bigfoot is, but people have been searching for it and talking about it forever. Perhaps itâ€™s the human natureâ€™s longing to explore and discover, or just a near-insurmountable challenge that drives this hunt. Whatever the reason, Alderac Entertainment Group has continued the myth with the release of Yeti, a lightweight Euro with a bunch of custom dice, some really cool looking 3D elements, and a ton of fun mechanics. Before I get into why I dig the game and what I donâ€™t like about it, I have to talk about the components, because I am a sucker for a well-presented game. This game is absolutely darling from a visual perspective. It comes with a large cardboard mountain as well as some neat little stand-up tents, well-illustrated depictions of everything- and maybe best of all- a little stand-up yeti that you canâ€™t look at without thinking about The Bumble. Itâ€™s just a lot of fun to look at and it makes getting it to the table with the family, without argument, really easy. The initial â€œbuildâ€ of the tower and the pieces can be a little daunting because the slots are maybe 3mm wide, so you need to use a toothpick to pop out the cutouts or youâ€™ll tear something, like I did. If you do, however, a swipe of Barge brand cement will permanently repair it. I mention this because one of my tents tore, and I fixed it as described. 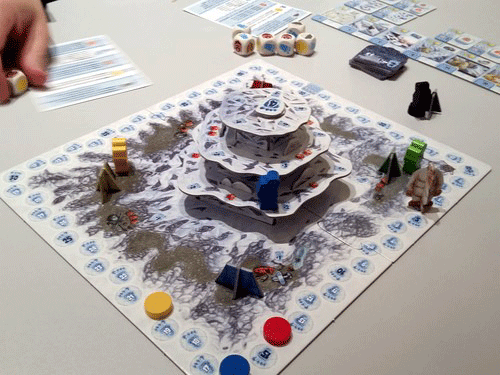 Looks like a cake and tastes sweet. But donâ€™t eat it.

While this game is definitely a lighter game, it does have an unexpected level of depth due to the choices. The first choice you make on a turn is in which dice to re-roll. Similarly to Martian Dice, you may choose to re-roll any dice you havenâ€™t locked in, but you must first lock in all dice with one chosen face, and you must additionally always keep the faces that show snow. If you donâ€™t have much snow, nothing happens, but if you have too much snow, it triggers a blizzard which brings the end of the game closer, and everyone also loses dice until for an entire round. This is one of my favorite press-your-luck mechanics, because it gives you really tough choices moving forward while protecting your existing progress. Anyhow, in Yeti, the object is to gain victory points, one of my least favorite reasons to play a game, and doing so is accomplished by using the die faces to enact specific actions.

Thereâ€™s a wide variance on how to spend your dice, but not because of the dice themselves as much as because of the tableau of equipment and action tiles which can do a lot of different things. Many of these tiles simply allow you to get extra, free die faces or that allow you to manipulate your dice pool. On top of that, some tiles allow an ongoing effect every turn while some only allow you to use it once, and then return it to the tableau. The best part about this system is that they decided to add direct player interaction in the form of taking peopleâ€™s purchased tiles for a fee of victory points. Essentially, you steal their powers but they gain some victory points when you do. Iâ€™m not super-keen on forced quid-pro-quo mechanics, but in this case, the penalty of gifting them victory points is outweighed by the delight of screwing up their plans and the benefits the tiles provide their new owner. In addition to the equipment tiles, thereâ€™s an optional set of weather tiles and alternate rules which can really change the way the game plays out, although it brings about some really nasty effects that may feel too punitive for younger kids. Letâ€™s call that the â€œmatureâ€ version of the game. 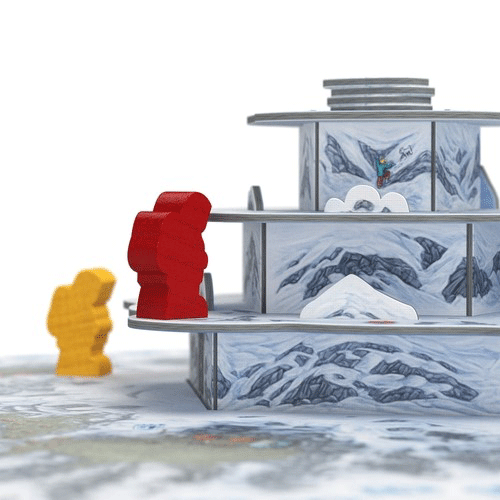 Ice Climbers: The Board Game?

Another thing I really dig is how this is a race game, at its core, and I really like timed games. That Bumble I wrote of earlier acts as a game timer, with scores moving upwards on the scoring track and the eponymous creature moving downwards when a blizzard occurs. Whoever passes the yeti first is the winner, simple as that. Thereâ€™s no arbitrary end point, per se, and with open information in the entire game, so itâ€™s always a moving goal post. The tension created by the system makes you ask yourself those questions every turn. It works marvelously well.

In short, I really like this game and my whole family did too. This is a really inexpensive option that I think is both really exciting to look at and really fun to play with your family. I probably wouldnâ€™t play this with analysis-paralysis prone people because there are some really tough choices to make sometimes, and many options, but beyond that I canâ€™t see anyone not liking this aside from the truly dicephobic. Definitely check this one out.