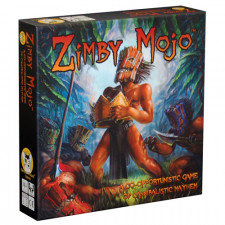 Pause on those two words for a minute. Unless you already know about Jim Felliâ€™s latest game, youâ€™ve never seen those two words together before. And youâ€™ve never played a game quite like Zimby Mojo before, either. Last year, Mr. Felli put out one of the most interesting- avant garde, even- adventure games in recent memory with Shadows of Malice. It was a singular design full of weirdness and wonder, operating almost completely outside the routine that too many game authors fall into where various mechanics are used as if pulled from a toolbox to express a setting, concept or narrative. But it isnâ€™t that Mr. Felli is creating completely unprecedented work, itâ€™s that heâ€™s using his influences to create something fresh. 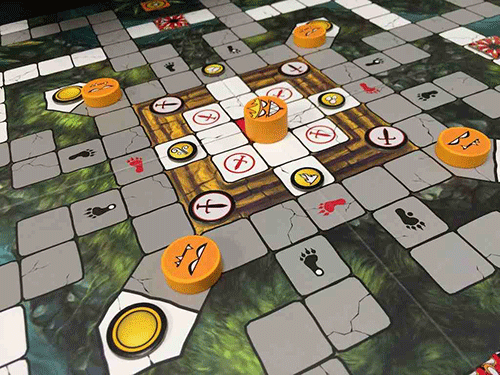 Mr. Felliâ€™s illustration style is simple, but stylish and distinct.

Zimby Mojoâ€™s concept alone should be enough to interest game players looking for unique and unusual experiences. Each player represents the shaman of a â€œZimbyâ€ tribe. These are a kind of pygmy cannibal with a nasty disposition but undying fealty to their leader. Each shaman is tasked with sending out their Zimbies into the Cannibal Kingâ€™s jungle compound with the goal of evading the rulerâ€™s thugs and committing regicide. With the deed done, the Zimbies need to then return to their tribal area with the Cannibal Crown in hand.

Of course, this is not easy to do. For one thing, the King isnâ€™t just lying about. Heâ€™ll move around his area, casting four different spells (which are different each game) that generally hit every player hard or make Zimby life miserable in some way. The resource metric is Mojo, and you only only four of these points per turn to spend on creating new Zimbies, making Zimbies into Zombies (more on that in a bit), casting various spells and moving stacks of the little bastards around the pathways leading up to the Cannibal Kingâ€™s throne. Of course there are other ways to get Mojo, such as cannibalizing your Zimbies. But doing that means less of your Zimbies on the board to do your bidding.

You also canâ€™t do this alone. Youâ€™ve got to partner up with one or more players (by the way, this game supports a whopping eight players) in order to break these elemental seals that are protecting the king. To do so, you have to have a stack of Zimbies from one or more tribes. From there, your alliance of convenience can go either way- there is no joint victory condition. All bets are off once the Crown has been pried from the Kingâ€™s lifeless head.

So a lot of the game is about stacking and moving these Zimbies and a lot of rules surround this element. The more Zimbies in a stack, the more Mojo they take to move around. They are stronger in combat with the Kingâ€™s Thugs or other Zimbies when stacked with multiple tribes, but control of the stack shifts to whoeverâ€™s turn it is that has a Zimby in the stack. And to jump in one of these piles, you have to have the permission of every tribe that is in it. 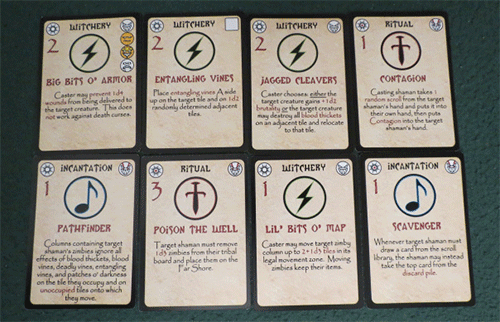 Itâ€™s quite brilliant that the first half of the game requires these kinds of very tenuous alliances, but then once the King is offedit turns into a free-for-all scrimmage for the crown with residual vendettas and grudges that a single winner needs to navigate through successfully. When you add in a huge deck of crazy Scroll cards, which include cards that require Zimbies to â€œchantâ€ to maintain them and all sorts of nasty take-that aggro, the design feels something like a madcap descendant of Wiz-War.

Much like Tom Jollyâ€™s classic design, there are elements such as on-board, destructible obstacles and conjurable monsters. In this case, you can turn Zimbies into Zombies. I love this little bit of the design because the Zombies are stupid, they do not care about your goals, and they introduce an often hilariously destructive and random element to the game. They attack anything they are next to, without concern for tribal loyalties or alliances. Your shaman can control them on your turn, but at the end of the round they have a Shamble phase where they move a random distance. So a couple of Zombies roaming around usually results in some unexpected consequences.

But thereâ€™s even more to it. There are magic portals for teleporting. The combat includes this crazy thing where you sort out wounds by dumping a Zimby stack into a bag and randomly drawing the difference in combat scores (which include a die roll, a Brutality rating and any cards played). The Kingâ€™s four spells for the game have wildly different effects. And all of those Scroll cards inject a tremendous dose of both variety and unpredictability.

This game is wild, untamed territory. Itâ€™s bug-eyed and psychotic and it flies in the face of so much of what is regarded as â€œelegantâ€ or â€œmodernâ€ game design. The luck averse should run screaming. But those who do not enjoy savagely cutthroat games dependent on table-talk and merciless backstabbing should faster and scream louder. I would also issue a warning to those who are not willing to dive into this thing with both feet and accept its quirks and idiosyncrasies. Much like Shadows of Malice, itâ€™s not a game for those who value safe ideas and clockwork predictability over barely contained anarchy and unfair swings of fortune.

Zimby Mojo is, as I had hoped it would be after playtesting it and offering some feedback to Mr. Felli, one of the best games of 2016. There are some things that bothered me about the design when I first played it- in particular the length- but I think the finished product is right on the money. But Iâ€™ve got to issue two more warnings. It is still a longer game than players may want from such a swingy, chaotic design but a couple of setup twists can greatly accelerate it. The other admonition is that it is a pretty complex piece of work. There are a lot of rules, and a lot of minor and easily forgotten ones at that. So this is obviously a game that requires a degree of patience that more accessible designs generally do not. There is a good solo option available if you just canâ€™t find others willing to participate in the mayhem, but having played up to six players I can tell you that this is definitely a more, the merrier kind of thing. Provided that everyone is aware that it is about 30 minutes per player.

Itâ€™s totally worth it all though, because there is nothing else like this game out there. The concept, the setting and the rules all come together to create a very rare one-of-a-kind experience. Itâ€™s also absolutely nothing like Shadows of Malice, which makes me even more interested in what Mr. Felli and Devious Weasel come up with next.