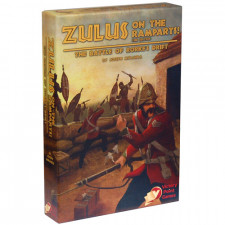 The air is thick with tension as a small group of British soldiers stationed in Africa on the border of the Zulu Kingdom know an attack is imminent. Then, on the horizon, the Zulu attack comes from all sides. The relief column wonâ€™t arrive until morning. Can they survive the assault until reinforcements arrive?

Zulus on the Ramparts is a single player game that puts you in command of the British soldiers at Rorkeâ€™s Drift. Based on a real event that got the Hollywood treatment in the 1964 film Zulu, your job is to stave off the attack. But it isnâ€™t just a single, forward assault. Instead, theyâ€™ve split their forces into four separate attacking groups coming from different directions. If any one of them gets inside your fort, youâ€™ve lost. 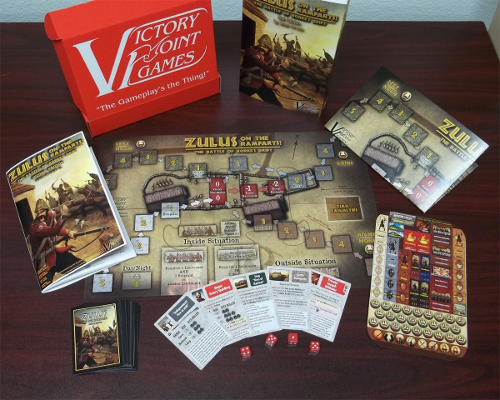 Each turn, you begin by pulling a random chit from a cup. Depending on which you pull, one or more of the Zulu forces may move closer to you. Alternatively, special events may occur in which your rifles overheat, buildings catch fire, or a Zulu prince joins the fray.

After theyâ€™ve moved, youâ€™re allowed to take your own action. Often, this will come from card play. Your hand of cards typically allows you to fire shots at the enemy. Some are better at longer range; others give you more dice for short range. You deal damage or kill the invading force on a 6 and cause them to pull back on a 5. Other cards allow you to play particular soldiers who were important to the attack and provide special, one-time use abilities.

At the end of the turn, youâ€™ll draw a card. At about the mid point, youâ€™ll draw one that plunges you into the Night, with a few new rules to address the challenge of fighting in darkness. Near the end, youâ€™ll draw the Relief Column card that ends the game with your victory â€“ if you can survive that long. Assuming you do, your play can then be scored to see how well you did relative to other plays.

Solo games face unique design challenges in board gaming. On the one hand, they canâ€™t be too deterministic. If there is an obvious move or a dominant strategy, you simply do that. It becomes a puzzle that is merely there to be solved and then you move on. It loses the replayability that makes games so great. On the other hand, though, they canâ€™t be too chaotic, either. Sometimes, a solo game will infuse tons of random events to make things play out differently. But then it feels less like youâ€™re playing a game and more like youâ€™re just moving pieces around while factors over which you have little control tell you whether you win or not. Despite these challenges, Zulus on the Ramparts straddles the line wonderfully.

Sure, there are random elements. The chit draw at the beginning is largely random. Although, after a few plays, you know the possibilities. You know, for example, that some Zulu forces are more likely to move than others and which typically move quicker. This allows you to make informed decisions. Yes, there are also die rolls. But you have options available, such as forming a Reserve Platoon or distributing ammunition that allow for better results.

But the key, I think, is the card play. Youâ€™ll have a hand of cards offering you different kinds of attacks based on whether the force youâ€™re targeting is near or far. Youâ€™ll have to decide when to play out a named soldier for his special effect, or when to discard him for his powerful one-time use ability. Sometimes your hand starts to fill and you feel like you need to shoot just to avoid a discard. Other times, youâ€™ve blown your best shots and need to spend the turn fighting fires or building barricades to give you some time for your hand to increase.

This card play provides a sense that you are more in control of your fate. Sure, there are still die rolls and chit draws. And although bad luck can be detrimental, it doesnâ€™t feel fatal. It feels more like youâ€™re in a bad situation where luck can turn against you but you also have the tools necessary to make an effective (and hopefully successful) stand against the Zulu forces until help arrives. It really generates an atmosphere of tension and desperation as you try to hold off the enemy for just a few more turns.

Plus, Zulus on the Ramparts is logistically an easy solo game to play. To my mind, a solo game comes off the shelf when game night is unexpectedly canceled or when you have that board game itch but no one else does. In those instances, it can feel like a chore to set up some massive endeavor or decadent to set aside several hours all alone. But Zulus sets up quickly and takes only about 30 minutes. Itâ€™s just the right length to make it easily playable, and fun enough to make you want to play.

Solo games tend to be a mixed back. But Zulus on the Ramparts is near the top of the heap. If you enjoy gaming alone- especially if you like war gaming- then this title should be one to investigate.