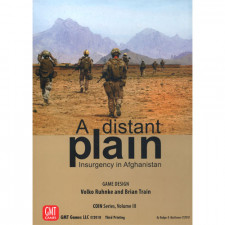 **Please Note: Review is of a previous edition of A Distant Plain**

No game exists in a vacuum. Like any form of media, games are tied to and influenced by the society in which they exist. I was not quite 15 when the Twin Towers fell. The resulting conflict in the Middle East has raged on over half of my life, dominating foreign policy and news cycles. That is the context in which A Distant Plain exists. That is what I think about when I see the sandy colored box on my shelf.

Kandahar. Helmund Province. Kabul. These are places I know about, but not places I know. Iâ€™ve heard about them through news coverage, a woefully inadequate way to have learned the morass that is this particular conflict. All the coverage I saw growing up was relatively black and white. The US good guys vs the Terrorist bad guys. With that framework, itâ€™s no wonder that my first few plays of A Distant Plain were strategic disasters.

Pitting the Taliban toe to toe with the Coalition is a surefire way to lose all of your recruited insurgents. Thinking that the Government will have your back or that the Warlords will accept your payments and not strike will lead only to disappointment and a pile of cubes in your casualty box. Wargames have always been good at simulating the battlefield, but A Distant Plain takes a higher level approach and models the political realities of modern conflicts. The Coalition doesnâ€™t want control; they want the population to support the new government - a critical distinction. While itâ€™s easier to build support with control, the Coalition needs to be careful controlling spaces for too long because the Government benefits from that occupation.

What makes A Distant Plain a great game, indeed all the COIN games great games, is the interlocking series of alliances. Itâ€™s hard for a faction to advance their victory condition without helping and hurting someone else. The Government will likely have no problem with the Coalition using Government funds to build popular support, knowing they can siphon that support away in service of expanding control through corruption. You wouldnâ€™t expect the opium growing Warlords to work with the Coalition but there is room to negotiate. In exchange for ignoring poppy fields and insurgents, the Warlords may agree to maintain just enough presence in a province that the Government loses control but the Taliban canâ€™t come in to turn that support into opposition.

As the deck of cards ticks forward, determining turn order and powerful events, players must navigate a constant ebb and flow of board presence and action opportunity. Playing on a card renders you ineligible for the next, but passing may allow you to set up a powerful turn. The game state shifts like sand dunes in a hot wind and jumping in at just the right moment can make the difference in victory. Where some may see the Coalitionâ€™s ability to Surge a significant number of troops off the board as a cheap way to score a win, I disagree. Declaring victory by fiat and leaving behind a squabbling mess of competing factions seems like a brilliant way for the mechanics to work in concert with the setting.

Negotiations are not limited to actual actions. Theyâ€™re also present in the turn structure. Taking the first action on a turn is powerful. You have the first option to take the interpretation of the Event that best suits you; you also decide what the next player can do. Events represent everything from IEDs to real events but each one portrays its subject two ways. Take the Seal Team 6 card, representing the raid on Bin Laden. Executed by the Coalition it removes Taliban forces in Pakistan which is normally very difficult; if executed by the Taliban, they gain support from Pakistan and can operate more efficiently. These events are powerful, but they also set your opponents up for a full turn. Opting for a slightly less effective turn can limit your opponents even further or even push them into considering passing.

Again, negotiations run rampant. I may accept a less effective turn as the Coalition so long as the Government behaves and doesnâ€™t siphon support. The threat of gutting their resources by moving and assaulting with their pieces acting as literal shields for Coalition troops usually keeps a tense cooperation going. The core of ADP is an asymmetric area control game. What makes it fascinating is the weave of alliances, retaliations, and tense agreements that shape play.

Iâ€™d be surprised if very many people walk away from A Distant Plain without a deeper understanding of the complex socio-political aspect of the never ending conflict in that region. A board game that can portray that while still presenting an engaging and strategic game is something special. A Distant Plain does that and more. A Distant Plain is important.