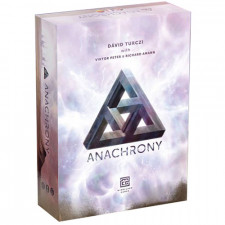 Mindclash Games, the small publisher responsible for Trickerion, are masters of sleight of hand. They present to you what appears to be an ordinary worker placement game. Feel free to examine it for hidden compartments. Theyâ€™ll dazzle you with the unusual theme, lull you into a false sense of security as you go through the familiar motions of placing workers, collecting resources, and building your engine. You canâ€™t quite put your finger on when it happens, but by the end of the third round, you realize that something astonishing has occurred. Despite all appearances, this is no ordinary Euro game. But try as you might, you canâ€™t explain this magic to anybody else; itâ€™s all in the details.

You thought I was out of magician puns? Think again, buddy.

Anachrony is very much cut from Trickerionâ€™s black velvet cloth. History repeats, and the makers of Trickerion are set up for a hat trick. The setting is even more outlandishâ€”yes, more outlandish than a city entirely populated by stage magicians. Like its predecessor, Anachrony is hard to pin downâ€”there isnâ€™t a single mechanism that makes it stand out, but every piece is a cog in a gilded clockwork peacock. Or, to switch to a more appropriate metaphor, itâ€™s like the head trip at the end of Twelve Monkeys or Primer, a moment of inevitability arrived at from past and future at once.

And â€œhead tripâ€ is the perfect word to describe Anachrony, both in theming and gameplay feel. I wonâ€™t even bother trying to summarize the backstory (which is simultaneously the forestory) except to say that itâ€™s the post-apocalyptic future, humanity has splintered into four ideological factions, and thereâ€™s an even bigger apocalypse coming. Luckily, the first apocalypse introduced time travel into the world. You canâ€™t avert the second apocalypse, but you can set up your faction to be on top when humanity rises from the ashes.

As far as gameplay goes, think of it as your standard resource-management worker placement game with a fusillade of plot twists. Anachrony plays out over a variable number of eras, no more than seven, with the big bada-boom happening between the fourth and fifth. During an era, players representing the four factions send workers out to action spaces in and around the new World Capital, doing things like gathering resources, recruiting additional workers, and spending resources constructing buildings or super-projects.

The player board fills up quickly with buildings, super-projects, and anomalies.

Plot twist 1: There are three types of specialized worker, and the spaces give discounts or bonuses to some specializations while locking out others.

Plot twist 2: Because the first apocalypse rendered most of the surface uninhabitable wasteland, the workers you send must be placed into exosuits (cardboard tokens in the base game, awesome plastic figures if you have the absolutely worthwhile expansion). These exosuits must be powered up at the start of the round, before anyone places their first worker, and you donâ€™t get any refunds for exosuits you donâ€™t use.

Plot twist 3: Used workers get exhausted at the end of the round and are unusable until you use a special action to â€œmotivateâ€ them again. You have two choices: spend a worker and increasing quantities of water (a rare resource in post-apocalyptia) to keep the workers happy, earning VPs at endgame, or force them to work, earning negative VPs and eventually killing off your workforce if pushed hard enough.

Plot twist 4: To help you accomplish more during a round, you can â€œborrowâ€ resources (or even personnel) from yourself by warping them in from the future. The only way to pay off the loan is to build a special time travel building, travel back to the era when you placed the warp, and discard the equivalent resources. Failure to do so will incur paradox tokens every round as long as the warp remains open. Get enough paradox tokens, and they turn into an anomaly, which takes up one of your precious building slots and is worth negative VPs at the end of the game.

There are many paths to victory. Buildings themselves are worth victory points; super-projects are worth more, but they take up two adjacent slots on your crowded player board. Paying off your time debts boosts your time credit score, earning points, as does keeping your workers happy. Various actions earn VPs during the game, but the biggest single payoff youâ€™ll encounter is your pathâ€™s evacuation goal. You choose one of two path-specific options at the end of the game, and you can send a worker to the World Capital to cash it in at any point after the cataclysm. These goals follow a general format of â€œmust have at least X of these, and you get some VPs for each pair of these,â€ typically with no upper limit.

Plot twist 5: After the impact, some of each playerâ€™s exosuit slots get destroyed, making it even more expensive to send workers to the capital.

Plot twist 6: After the impact, the capital begins collapsing. Each space gets a random one-time bonus, after which it is unusable for the rest of the game. The game ends on the round when all the capital spaces have collapsed.

After the impact, itâ€™s a race to grab the last spaces before they collapse.

Every path has a unique feel prompted by their evacuation goals and leaders, who offer path-specific powers. Flip the player board over, and things get even more interesting with asymmetrical setups: each path has its own little bonuses, maluses, and scoring tweaks. These are well worth exploring, and if you get bored with that, there are seemingly infinite optional gameplay modules in the core box alone. The biggest one, Doomsday, adds new actions to the game as players can postpone or help trigger the apocalypse, depending on their path. The alternate timeline tiles give bonuses or penalties for placing warps, adding to the blind bid element of that phase. Starting resources can be drafted instead of fixed, and the Chronobot solo mode is a wickedly challenging AI that easily stands alongside the best automata Stonemaier Games have built.

Anachrony is easily at the heavy end of games I feel comfortable playing. Because powering up exosuits and warping in resources happen before worker placement, you need to run through a full simulation of the round, with at least one contingency plan, before your first action. This can cause time to stand still if you have analysis paralysis sufferers around the table, which is the worst I have to say about Anachrony. Get it now; future you will be grateful.