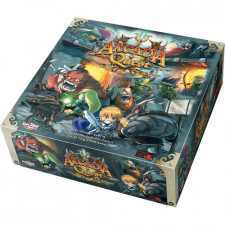 The dungeon crawler genre varies from heaver titles such as Descent to the lighter Gauntlet-esque Super Dungeon Explore and a few games where the setting provides a context for die-rolling, card drafting or other mechanics. Arcadia Quest weighs in on the lighter end of the scale in terms of setup and bookkeeping, but manages to offer a surprising depth of strategy and storytelling. Each player commands a guild of three adventurers journeying through Arcadia to stop evil Lord Fang and restore happiness to the kingdom. Or at least most of it, since the elves and orcs will probably still be grumpy about something.

There are eleven different quests- each a unique battlefield with its own goals and enemies- among which players must choose six to complete their quest. Most have one to three unique goals to complete, and all require players to complete one player versus environment (PVE) goal, fighting monsters or acquiring an objective on the game board. Since someone has to be in charge when evil is finally defeated, players also complete player versus player (PvP) goals by killing a member of another guild, creating varying definitions â€œus versus themâ€.

Players draft heroes and equipment to form their individual guild. Once in their starting locations players take turns activating one hero. Each may move and attack either a quest monster or another of the heroes from a rival guild. Melee, ranged or magic attacks are resolved using custom attack dice and countered using defensive dice, the number of each dependent on the hero and weapon involved.

Each weapon or spell typically can be used once. Players may elect to rest their heroes instead of activating one, replenishing weapons and reviving dead guild members. Heroes cannot die permanently but death still exacts penalties by way of skulls, which are a currency used to purchase mandatory Death Curses. Once a guild completes the questâ€™s requisite goals, that particular battle ends and the spoils are divided, each guild counting the number of coins and skulls (from their own heroes dying) earned.

Players use gold acquired from killing foes or finding treasure to purchase upgraded gear in a draft, producing the typical â€œI want to keep all of these but can only pick a coupleâ€ reaction. Heroes with skulls must choose a Death Curse, inflicting a hindrance for the next quest. Some quests bestow titles when completed, conferring benefits later in the game and helping create the narrative of a once-proud kingdom yearning to be liberated and return to happier times, unless youâ€™re one of those disgruntled orcs or elves.

A couple facets of Arcadia Quest may distract from the adventure, my chief gripe being with the passive â€œguard reactionâ€ that represents an attempt to create an enemy AI. Monsters in a quest only react to anyone close to them who either attacks or moves away. This works very well for either of the aforementioned conditions, but only under those conditions. Walk up to a monster and stop, and nothing happens. Seems a bit odd to me, but thatâ€™s the deal. Run and theyâ€™ll chase you. Failing that, theyâ€™ll stand quietly. Granted, itâ€™s rare that heroes donâ€™t need to kill a monster or two, but combat initiation is mostly up to the players.

To illustrate- if I drop a Minotaur next to a player, if that player does not move or attack he can effectively remain in the middle of that horde for the rest of the quest with no fear. Plus, heroes donâ€™t get the same reaction chance, and it seems odd that orc sentries have quicker reactions than my champions. House rules could, of course, solve some of the issue.

The other minor quibble: the chibi thing, which I think is Japanese for â€œmurderous-looking children.â€ Chibi style has recently gained traction in the mini world as seen in Super Dungeon Explore, Rivet Wars and other successful titles. The Arcadia Quest minis are high-quality examples of this artwork style. Iâ€™m not particularly fond of chibi and I find it an odd choice for this type of game.

Overall, Arcadia Quest is a great episodic dungeon crawler with a solid sense of persistent, campaign-like elements and a strong narrative framework showing through in the gameplay and how the characters develop over the course of a quest.. It combines PvE and PvP goals to create competition while ensuring the quests donâ€™t devolve into repetitive hero slaughter as the â€œguardingâ€ monsters stand idly by and watch.