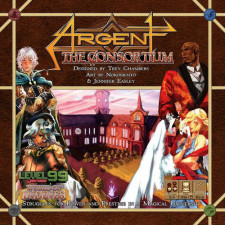 **Please Note: Review is of Argent: The Consortium (1st Edition).**

Who wouldnâ€™t want to be the next President of a magical university? Many of us are still getting over the sting of not receiving an invitation to Hogwartâ€™s. In Argent: the Consortium, each player takes the role of a professor or dean of one of the schools of magic (or the Student body) and tries to convince the Consortium to elect him President. The goal then, as with all politics, is to identify the voters and pander to them. Trouble is, Consortium voters cast their vote due to specific criteria- the player with the most coins, most mana, most supporters, most Sorcery, etc.- and 10 of the 12 voters are hidden at the start of the game.

This leads to an interesting and unique end-game. With twelve voters, there is no way youâ€™ll discover them all and youâ€™ll be lucky to see as many as three. So you have to make educated guesses based on information gleaned from what your opponents are doing. The end game confirms those guesses â€“ or demonstrates just how wrong you were. One by one, votes are revealed and given to those players who meet the criteria for each voter. That final resolution can be a tense nail-biter as most players know theyâ€™ll receive a few votes, but the rest are more uncertain.

The end game is awesome, but what about everything before the resolution? Each player starts with five mages chosen from the various magical disciplines studied at Argent, each also gifted with a special power keyed to their specialty. Divinity mages are immune to spells, Sorcery alumni can throw a fireball to force them to vacate their spots, and so on. The board is modular and includes between eight and twelve rooms of the University depending on the number of players. The game comes with many more, so each setup â€“ and the optimal strategies â€“ can be starkly different from game to game. In turn order, players take an action â€“ often placing mages or casting spells. And thatâ€™s where this nominal worker placement game gets mean.

Many spells allow a player to wound the mages of other players â€“ sending them to the Infirmary and evicting them from where they were placed. Other spells allow players to act faster â€“ potentially ending the round early. As the game progresses, players learn more about the voters and should start taking actions according to what they have determined or guessed. I might know that the Wisdom voter is out there, but you donâ€™t. So I start wounding, moving, or otherwise attacking any mage of yours who tries to get Wisdom so that I can keep my lead. Because you donâ€™t know that I have an agenda for the agro, it can seem spiteful.

But wounding a mage isnâ€™t such a big deal so the PVP-averse should stick around. Worst case scenario, your mage goes to the infirmary and you get a minor compensation (a coin, mana, or influence â€“ generally worse than you would have gotten on the space you placed), and then pick your mage up for placement on the next round. The main reason you move or wound mages is to get them out of the good spots. The placements donâ€™t resolve until the end of the round. So if someone takes the spot you want a little creative magic (or simple brute force) can make it available again. There is a lot of this kind of jostling for position over the course of the game.

Assuming your group can handle the direct attacks, this game is legit. Itâ€™s almost like it was crafted in a sublime alchemy of gamer desires. Worker placement, direct interaction, fantasy theme, attacks and counters, magic items all add up to a complete package. All of it comes together to create an experience thatâ€™s not only fun to play, but also encourages the kind of attacks and machinations that youâ€™d hope to see at an elite magical University full of spell-slinging mages.

Negatives are few, but the logistics may be problematic for some. Argent comes with a ton of bits. The modular board and numerous components means that setup and teardown take longer than expected. And, though it doesnâ€™t feel like it, Argent is definitely a longer game. Even with the minimum three players, it can run about two hours for the first few plays. More players and it runs even longer. There are not only more turns, but more rooms and more options to consider on each turn. With experience the game length can be tamed a bit, but it will typically be near the two hour mark.

Mechanically the game is brilliant. Having the workers with different powers means that not only is there a race to the best spots, a common feature of worker placement games, but there is also strategic use of workersâ€™ abilities. A Naturalist mage (immune from wounding) is great for a spot you want to keep. But a Planar Studies mage (who can be played as a fast action, allowing a player to take another action on the same turn) can race to the best spots or allow the placement of two mages in a row.

The game does a fantastic job of conveying the setting. In the first turn, you have a few loyal mages and struggle to gain the support you need. By the end, players are slinging spells and breaking out treasured artifacts from the vault in order to secure the Universityâ€™s top spot. Itâ€™s not really an engine builder since the cards come out too randomly for that, but it is about amassing power. And the more power you have, the more tricks you can pull.

And thatâ€™s one of the primary reasons to love this game. With so many options available, the player can feel clever on almost every turn. Each move is a masterpiece of tactical brilliance. Each retreat feels strategic â€“ as though youâ€™re blunting the main force of an opponentâ€™s strike. Put simply: Argent thrills.