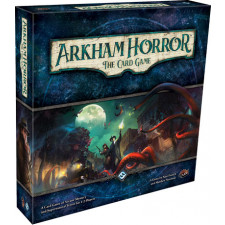 Lovecraftâ€™s Mythos stories are about dread and horror. They canâ€™t be captured in a plush toy and they arenâ€™t about humans vanquishing Elder Gods with a Tommy gun and a stiff upper lip. Theyâ€™re about a broken and damaged survival. Itâ€™s for this reason that I generally havenâ€™t been able to enjoy many Lovecraftian games. Until now.

To be clear, there are still machetes and shotguns and ordinary humans wielding them in combat. In Arkham Horror: The Card Game however, theyâ€™re used against rats and ghouls not against Great Cthulhu himself. Your investigators are investigating because someone has to but they know, and you know, that they wonâ€™t get out of this world unharmed. Fantasy Flight has always had great art and good flavor text in their Arkham Files games and this LCG is no different. What elevates the card game into something thatâ€™s got me so excited is the way the mechanics and structure of the game enforce and create that story as well. That dread and that horror are present. Theyâ€™re present in the flavor text and theyâ€™re present in the mechanics. 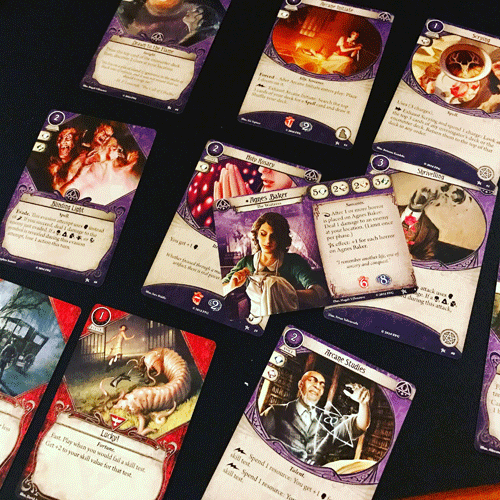 To begin a campaign of Arkham Horror you first must choose an investigator. Before you even build your deck you have to grab two required cards. One is your characters special item â€“ a gun or a necklace or something like that. The other is their weakness. Debts, horrible memories, and childhood trauma are all among the things that the game requires you to shuffle into your deck to start the game. Theyâ€™re all bad, and most do something the minute you draw them. In fiction, your characters live under a state of pressure. They know they have demons and that theyâ€™re clawing just at the edges of their subconscious trying to get out. In the real world, the players know that as well. Card draw is still important, but you know that eventually youâ€™re going to draw a weakness and suffer the consequences.

This interplay between the actions being taken by the fictional investigator and the player is present in other ways. I canâ€™t get too specific because of spoilers, but there are numerous instances where the game changes the way in which you deal with a threats in a way that opens up card play options. This leads to opportunities to use your cards in creative ways. For example, normally threats must be fought or run away from. However if the â€œthreatâ€ is a psych patient who just wants someone to listen to them, you can sacrifice your turn to deal with them instead. Since the game has an oppressive doom counter that ticks the game to a negative resolution youâ€™re given a hard choice. Do you kill the patient? Itâ€™s faster. Or do you figuratively give up the time your investigator spends listening to him by passing your turn?

The decisions made are hard because of Arkham Horrorâ€™s campaign structure. Your actions donâ€™t just influence tonightâ€™s game, they echo forward. This is a campaign game where you are frequently instructed to write something down in the log. Future scenarios within the campaign might change in drastic ways based on what you have written down in your campaign log. Youâ€™ll come to fear those italicized instructions because you have no way of knowing if what you did is good or bad; you just know that itâ€™s permanent. That character is dead or that location is gone. Or, if you ran screaming from a monster in an early scenario you may wince as a later scenario instructs you to find that card and shuffle it into the encounter deck. The decisions you make in this LCG are some of the most powerful Iâ€™ve made in any campaign game Iâ€™ve played. 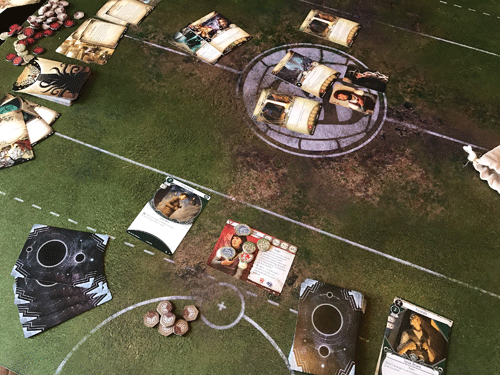 It starts small, but the world slowly grows and reveals more horrors.

Your character will change along with the world. Between scenarios you gain experience which is used to slowly make your deck stronger. Those little notes you write down may provide later boons, like in the case of the last scenario in the Core Set. The world feels alive because it responds directly to your actions in very clever ways. This game would not work if either the mechanics or the story didnâ€™t work well together. Fortunately, theyâ€™re equally strong and work in tandem to create a phenomenal tabletop experience.

This is already one of my most played games of the year, and itâ€™s been out about a month. It works equally well alone or with up to 3 friends (second core set required) which means itâ€™s easy to pull off the shelf. Plans have already been announced for future expansions â€“itâ€™s an FFG LCG after all â€“ and Iâ€™ll be in line grabbing every single one for the foreseeable future.