Critical Hits: Beautiful production, easy to teach, feeling of satisfaction at the end
Critical Misses: Potential to slow down with some groups, some luck of the draw involved

There is a small corner of my collection reserved for games I bring out when friends and family who donâ€™t often play board games ask to play something. There isnâ€™t a lot of movement in that corner; I donâ€™t really seek out new â€œgateway gamesâ€ and have always been happy to play Ticket to Ride, The Downfall of Pompeii, or Pandemic. That corner is getting a new game this year in Azul. 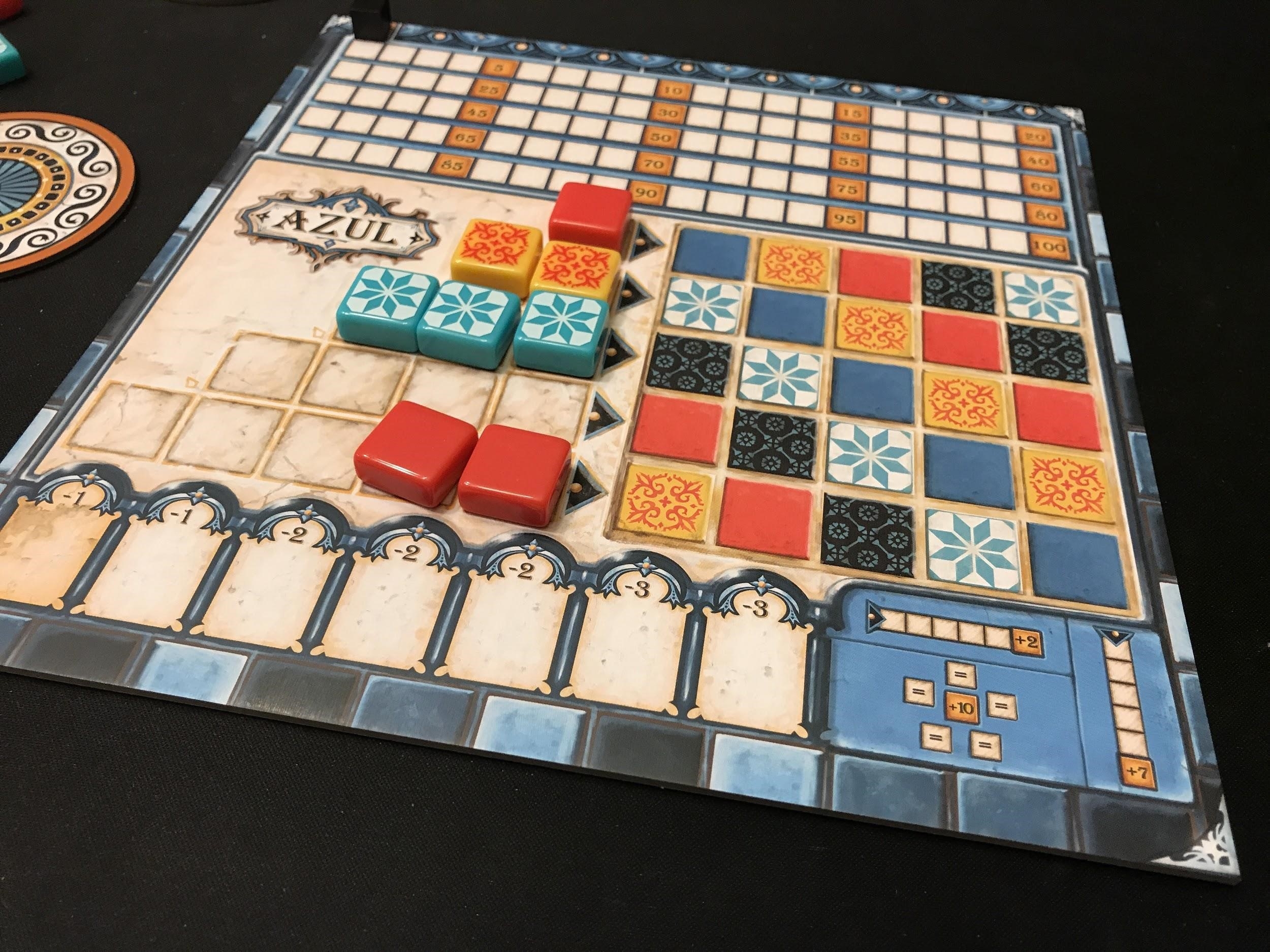 The label â€œgatewayâ€ is often used dismissively, but I definitely do not use it that way here. Azul does a superb job of being both approachable and appealing, while holding up to repeated plays by yours truly. The core system is a light draft that with the potential to get mean, and a light set collection system disguised as tile laying that is as much about managing risk as it is laying out a stellar board. In fact, the game encourages you to use a board with a pre-printed mosaic design to reduce mental overhead.

The draft works simply. A small pile of (gorgeous) tiles are distributed among 5 factory spaces. On your turn youâ€™ll grab all the tiles of a single color from a factory space and dump the rest of the tiles into the center. Alternatively, you can grab all the tiles of a single color from the center. These tiles are then placed onto your mat in one of 5 rows. When a row is filled you can place one of those colored tiles on your mosaic, with the restriction that each row cannot have 2 copies of the same color tile. Thatâ€™s all there is to the rules. 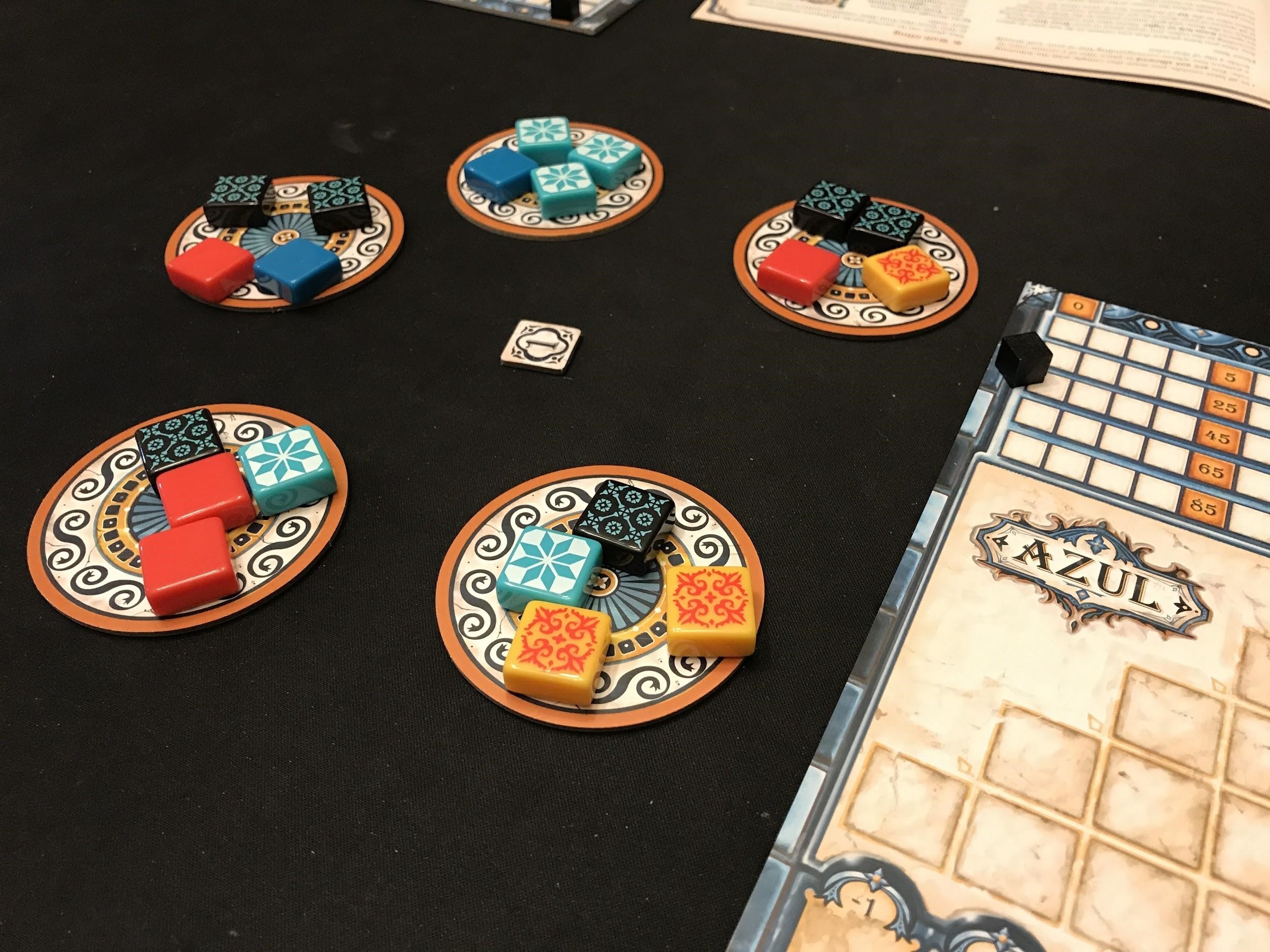 This is what makes it approachable. Itâ€™s easy to teach and play, and with a group of people who donâ€™t care to agonize over each otherâ€™s boards and play to block it moves along at a quick pace. Itâ€™s the kind of game that draws people in and makes you want to play another game; either to win or just improve your score. It can, however, be played aggressively and with a mean streak though itâ€™s prone to dragging a bit if you have players who spend too long on their turns. This gives it legs for those of us who may end up playing it over and over, though itâ€™s easy enough to scale things back and the game doesnâ€™t suffer for it.

The spark in Azul comes from the way your chosen tiles fill those rows. If you end up with too many tiles for a row, they spill over and cost you points. Early in the game this doesnâ€™t come up as much. With a wide open mosaic there is usually a row you can play into to avoid overfill. However, late in the game your options have narrowed and there is a good bit of tension in the draft. Suddenly grabbing tiles from the center becomes punishing and you find yourself cursing at yourself for previous plays. The risk of pushing for high set bonuses is felt strongly, and the temptation to exploit the top row to end the game is palpable.

When the game ends, itâ€™s a moment to exhale and step back. Hereâ€™s where the gameâ€™s appeal shines. Everything about Azul, from the colorful wrap-around box art to the bright tiles, draws your eye and the end game mosaics are no different. While there are strict rules about placement you have to abide to, youâ€™re free to create your own pattern. Win or lose, thereâ€™s some satisfaction at the end of the game in admiring what youâ€™ve built. Itâ€™s a smart aspect of the production, making it especially good to play with new gamers.

Azul is decidedly outside of my wheelhouse when it comes to games. It plays in 45 minutes, the interaction is indirect, and there are no dice or miniatures to be seen. That hasnâ€™t stopped me from developing a fondness for it and giving it a permanent place in my collection. It isnâ€™t something Iâ€™m going to play every week with my normal group but I know it will see table time with friends and family, and that box art is going to ensure that I always notice it when scanning my shelves.