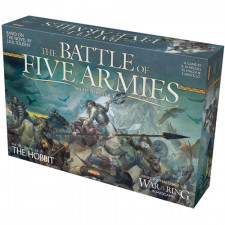 The majority of the many wargames on the market fail to deliver a cohesive narrative. Both participants are going through the usual motions: pushing some counters and rolling some dice, but theyâ€™re not necessarily caught up in the spectacle slowly emerging on the table before them. They donâ€™t feel any real dread or hope or loss or triumph as the tides of battle crash over the board. Over against this, Aresâ€™ Battle of Five Armies delivers a slowly unfolding epic tale, where each turn, every stroke and counterstroke builds the drama until the very last move pushes the game to its breathtaking conclusion. Despite a few shortcomings, itâ€™s an excellent package that brings many worthy innovations to the tactical wargaming world.

A good wargame has both players constantly feeling they can still win. A great wargame has both players always thinking theyâ€™re about to lose. Somehow, The Battles of Five Armies does both. Just one more turn, just one more event card, just one more attack, and the battle is yours. But if your opponent counterattacks just so, or summons one of his fearsome characters, or manages to beat down that fiercely guarded fortification, then itâ€™s all over. Itâ€™s clearly a lovingly crafted game with careful balance and pacing.

The game also has a great way of setting the stage and letting the pieces fall into place as the narrative emerges. The story is one of building tension, whether itâ€™s the Free Peoples sweating bullets as the goblins edge ever closer to pouring through the mountain pass, or the Shadow player shaking in his boots as the Fate Track ticks ominously toward the Eaglesâ€™ explosive appearance. The design gives you the tools to make big moments and costly gambles happen. The gameâ€™s as luck-heavy and risk-filled as you dare to make it. You wonâ€™t find a scripted path or obvious strategy, as the action dice and card play lifted from War of the Ring keep each session, and each turn, as fresh as ever.

To top it all off, the gameâ€™s strategic asymmetry sends its replayability skyrocketing. You could play dozens of games just as the Shadow, trying to figure out where to strike and the most efficient routes to mobilize your armyâ€™s far superior brute strength. The Free Peoplesâ€™ armies could not feel more different, as the FP player attempts to perform a steady, controlled retreat, managing his many heroic charactersâ€™ abilities to slow down the advancing hordes of evil. You almost get two games for the price of one here, as you get to explore the deep strategy tree of both totally unique sides.

There are some chinks in the armor however. A cornerstone of the design, the combat system, never resonated with me. Without question, it is solid, balanced and interesting. It involves a lot of player choice, and an equal amount of luck. Itâ€™s absolutely well done--but it feels out of place in the wider context of the clean, quick design. Five Armies is a snappy, brisk game, that sees the two sides making bold moves and countermoves as they probe for weaknesses, identify a pressure point, and move in for the kill, but all this is betrayed by the battle system. It feels slow, cumbersome, fiddly, and overcooked.

Each time you enter battle, youâ€™ll have to re-build a hand of combat cards based on your squad build, check for terrain advantages, simultaneously choose a card to play, roll dice, re-roll dice, deal damage, apply damage, and then start up another round, over and over again. The design of the whole deal is meticulously crafted, but itâ€™s just not that interesting compared with the time you have to spend on it. Since combat can take many rounds for damage to actually start eating away at your opponent, one single skirmish can take longer than the rest of the game turn altogether. This 3-4 hour wargame would easily take about half that time with a simpler system, and most significantly, the fights just arenâ€™t any more interesting for all the effort invested in them.

The Fate Track is a decent idea, giving both sides a mini-push-your-luck game to manipulate, but itâ€™s not all that engaging for either side. Players will curse the many precarious stacks of tough-to-handle triangular damage counters littered around the board. Finally, the designers piled on one too many card decks than there needed to be for the system to work. The shared combat and event deck is very generic, offering slightly more efficient actions than the dice alone would have given you. The combat functionality on each card tends to offer genre-standard bonuses like dice roll modifiers, extra combat strength, and a few other small surprises. The shared deck is just much less interesting than each sideâ€™s exclusive deck of powerful, thematic cards, and ends up feeling unnecessary.

The battles and few overdone elements are a sore spot for me because I love the rest of the design so much. A pared-down version of War of the Ring sounds like my own personal fantasy, and Five Armies comes so close to fulfilling that vision. I do have to stress that itâ€™s far better for my gaming tastes than its older brother. It plays in roughly half the time, takes up less space, sets up in much shorter of a time frame, and the decisions offer more punch right from the get-go. Itâ€™s also a well-designed, well-balanced, high-caliber tactical wargame in its own right, offering a mix of great ideas from the dudes on a map and wargame genres alike. If youâ€™re one of the special people who sit right in the Venn diagram cross section of â€œTolkien fanâ€ and â€œwargamer,â€ Five Armies is almost sure to win you over.