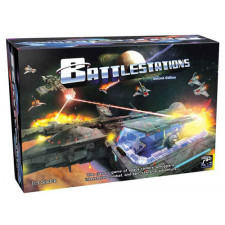 Battlestations is a rare animal. It's a Kickstarter-funded design with a proven history and a dedicated fan-base. In many ways itâ€™s the exact type of project Kickstarter was crafted for; a labor of love that needed that extra punch of capital to produce a physically beautiful product. And oh boy, this one's beautiful. 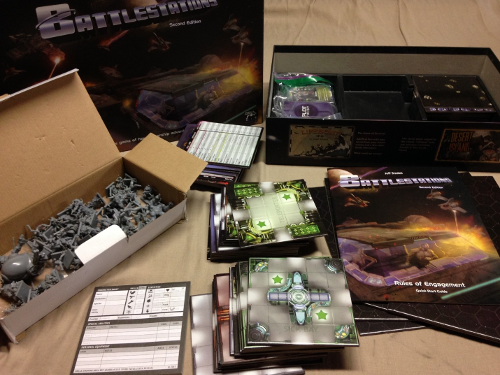 If you played the first (or 1.5) iteration of Battlestations then you know what to expect mechanically. What will take the wind right out of your lungs is the massive presentation. Instead of those flimsy 15mm-scaled standees and small ship tiles, we have substantial 28mm miniatures and thick cardboard in copious amounts. You get a huge power armor figure and multiples of most species. The sculpt quality is roughly on par with games of this scope but a step below competitors CMON or FFG. Fortunately the poses are solid for the most part and the unique character of each of the very-alien species is captured.

All of the cardboard assets are gorgeous and lovingly crafted. The artwork and graphic design is kicked up a hell of a notch. It's difficult to properly emphasize the huge leap in quality of this release from the previous Gorilla Games version, but you really need to get your eyeballs on this thing to appreciate its deluxe nature.

For those who have never heard of this cult hit, Battlestations is basically the table top equivalent of the popular indie video game Faster Thâ€™an Light (FTL), although the analog version we're discussing here predates the electronic by eight years. The hook of this design is the simultaneous play of spaceship adventure at the micro and macro level. So you're picking up your character mini and running about your spaceship to man different stations, perhaps firing the cannons or pumping energy, while a separate board features a small plastic version of your spaceship weaving between asteroids as an enemy freight throws plasma into your port-side. 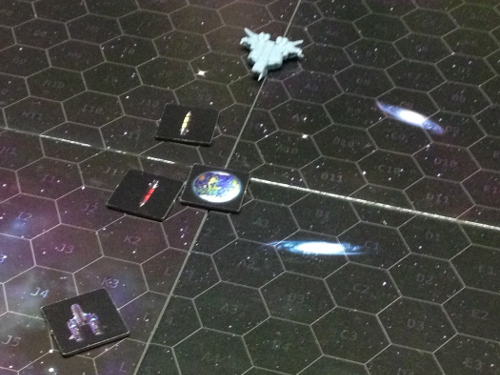 The interstellar greeting, a missile barrage.

This not only straddles two dimensions of play, but it also bestrides the nature of board and roleplaying game. One player will take on the role of game master, running the mission and the opposition, while the rest crew their leaky yet ferocious spacecraft. While the GM is encouraged to play full tilt, it still engenders that element of facilitator as you'll make decisions based on narrative or universe continuity as opposed to sheer competition.

Player characters rank up within the military and gain experience over time. You will customize your alien and gain new skills as your rock-man Silicoid becomes a hotshot pilot or fearsome intergalactic gunner. Each character fills a niche on the ship including pilot, marine, engineer, or science technician. If youâ€™re short a player or two you plug the holes with player-shared bots. Imagine R2-D2 with a blaster and you got the idea.

All of this is masterfully massaged and tweaked in this re-imagined version. The rules are tidied up and feel smoother in operation. One possible gotcha that doubles as a feature is that this release only contains a quick-start guide with truncated rules. The experience is complete as eight wildly varied missions slowly introduce new concepts over time. You'll decipher ancient alien languages, rescue stranded survivors, and trade missile barrages with ignorant tentacle-people.

While the game could aptly be described as Battletech meets Imperial Assault, the huge multitude of rules and sheer options in technology and ship abilities is cleverly trickled out in small doses. Complexities such as boarding missiles (yeah, boarding missiles), teleporters, and mine layers come once you've fully grasped core concepts.

With the challenge of distilling a huge rule-set down to manageable waves comes ambiguity. Some references are too abbreviated and missing key aspects such as Lasers receiving a +1 modifier to hit. Lasers are introduced as personal equipment from the get-go but this rule doesn't actually find its way into print until the fourth scenario, tucked away in a paragraph for the GM. Some of these little nuances will require research or just rolling with it, but for the most part the ship will keep trucking and fun will be had by the entire crew. 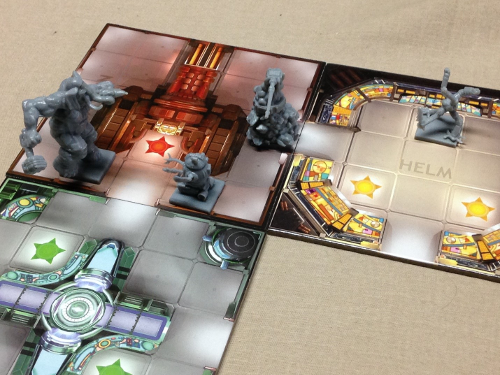 How many crew members does it take to change a lightbulb?

One important aspect to understand is that the hardback advanced rulebook is not included. This boxed set includes that quick-start guide only. This abbreviated text is a complete and playable experience, but most fans of the game will want to take the leap and track down the 300 page tome that contains 1400 more skills, 900 more missions, and 1.2 million optional systems.

But back to what this box is as opposed to isn't. One of this game's conceits is its unique ability to adapt. It's a malleable system that can be taken all the way into full-fledged pen and paper RPG. Players can energetically act out the dramatic story arc of their cockroach person fi thatâ€™s what gets their trousers in a jitter. Alternatively it can simply be approached as a board game with participants blowing holes in stellar vessels and looting the dead. The ruleset truly supports both styles and it's ultimately up to the group.

This sense of openness and customization resides within the scope of the rules themselves as opposed to merely lip-service. You can create custom ship layouts and even approach missions in different ways - "burn 'em all!" versus "let's talk about this". It can feel endless and dizzying at times as if you're staring up at a gigantic skyscraper and trying to get your bearings. Fortunately that high-rise is a shiny toy in this instance and the limits are your imagination Mr. Wonka.

However, due to this boundless RPG backbone, the experience is reliant on a skilled GM coupled with an interesting mission. If the referee does not have a strong command of the rules and doesn't keep pushing the pace of play, it can devolved into tedium and get a bit monotonous. The flip-side is that a wonderful game master can inject a sense of personality and charisma into the process that really elevates the adventure.

When everything aligns and your thrusters are firing at a full burn, Battlestations is majestic. You'll dive into the absurd as a starfish dude is piloting your spacecraft trying to dodge missiles, meanwhile you're aboard the enemy station sabotaging their power supply and engaging a mushroom in hand to hand combat with a vibraknife. If that doesn't get the heart aflutter then your ticker's colder than the dead emptiness of space.