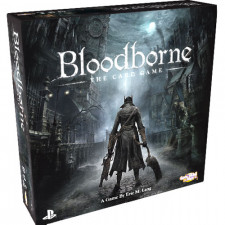 From Software has made some of the best video games of all time, singular designs that are fearless, peerless, and of course ruthless. The best thing theyâ€™ve ever done, in my estimation, is last yearâ€™s PS4 release Bloodborne. Itâ€™s a gothic horror apotheosis with a staggeringly bleak atmosphere and a compellingly vague narrative told mostly through implication and suggestion. Of course it wasnâ€™t going to take long before someone took a shine to bringing a From game to the tabletop and the first attempt out of the gate is CMONâ€™s Bloodborne: The Card Game. 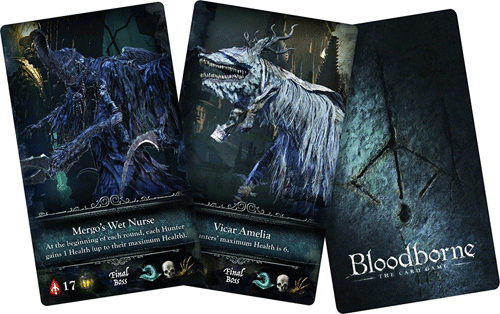 Sunshine and lollipops not included.

Unfortunately, itâ€™s sort of a near-miss. Designer Eric Lang isnâ€™t riding high in the charts for me these days as it is, after The Others, but this is the same guy that gave us Chaos in the Old World so it would seem the IP were in capable hands. But what came out of Mr. Langâ€™s design process is a relatively mundane dungeoncrawler card game that plays an awful lot like a simplified reduction of Smirk and Daggerâ€™s Cutthroat Caverns from a few years back. There are a couple of smart ideas that feel kind of Bloodborne-y, but the game overall is a ho-hum affair.

The card game concept comes from the gameâ€™s co-op Chalice Dungeons, a support feature to the main storyline. Which is fine, but out of the gate it already feels like itâ€™s straying from the kinds of things that make the video game so good. Each player plays a hunter (of course) and the idea is to cooperatively run the gauntlet of the Chalice Dungeon by hacking, slashing and shooting your way through a deck of monster cards to get to a final boss like Rom the Vacuous Spider or Mergoâ€™s Wet Nurse. Whoever has banked the most Blood Echoes at the end wins the game.

Each round, every hunter locks in an action card. These tend to be melee or ranged weapons, but there is also a Transform card that lets you switch weapons. You might want to do this because melee weapons yield more damage (and thus Blood Echoes) but ranged weapons have special functions to mitigate damage or to hinder other hunters. Or, you might use the Hunterâ€™s Dream card to go back to camp, so to speak, to bank all of the Blood Echoes you have earned and you can also take a pick from a row of upgrade cards- new weapons and gear. Deciding to forgo the battle to return to the Hunterâ€™s Dream is a big deal because you are essentially making a pit stop while other players forge on ahead. But youâ€™ll eventually have to do it because if you die, you lose them all the Blood Echoes you are carrying. Thatâ€™s pretty Bloodborne-y, right?

There is a neat press-your-luck concept here in choosing whether to stay and fight or go back and bank what youâ€™ve earned. The thing is, the monsters actually attack before the hunters so there is a risk in sticking around- especially since the monsters gets to roll dice to add an unpredictable number to their attack. And the dice explode on results with a plus sign on them. I like this because it sort of captures those moments in Bloodborne where you mistime an attack or drop your guard and suddenly you are on the back heel, getting torn to pieces and in danger of losing your echoes.

But the core idea is that you do damage, you take Blood Echoes. The monsters can run out and you wind up with nothing except regret that you didnâ€™t play a ranged attack. But if the monster is killed, everyone gets trophy points, which are good for bonus Blood Echoes at the end of the game.

The game accurately duplicates all of the charts that do not appear in the video game.

There are some good ideas at work that show that Mr. Lang put some thought into bringing Bloodborne to the table so it doesnâ€™t feel like a lazy or perfunctory design. I think the problem lies in the fact that the gameplay simply isnâ€™t very interesting. It hits some of the right beats- the difficulty, the harsh fail state penalties, the feeling of risk- but Iâ€™m not sure anything about it in aggregate really feels specific to Bloodborne. This could be any old fantasy dungeoncrawl. It just so happens that this one says Bloodborne on the box and has lots of great visual assets from the video game. In fact, I would not be surprised if this game were not originally designed as Bloodborne and it was sort of retrofitted to the IP.

Itâ€™s not a terrible game, just not a very interesting one. I think casual game players that really like the video game might dig into the accessible rules and co-op (but competitive) play. More seasoned tabletop players would likely be able to point to any number of similar games that are more compelling even without the trick weapons and Brainsuckers.