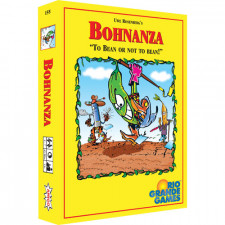 In the before time, in the long long ago before Agricola, Uwe Rosenberg designed games that were more than mere worker placement and resource conversion exercises. He was still all about the farming – to be specific, bean farming. In the classic 1997 release Bohnanza it’s all about growing and trading beans. This is a delightful little title that has stood the test of time and it can definitely satisfy families and gamers alike.

The core of the game is pretty simple. There are a dozen or so varieties of beans although you typically use fewer depending on player count.Each variety is of a different scarcity ranging from the uncommon cocoa bean to the excessively available wax bean. This affects their value.

Players keep their drawn cards in their hands in the order they were drawn. You cannot shuffle or rearrange your hand as you might in other games. On a player’s turn, they must plant the first card in their hand. This is important because you only have two bean fields. If you plant something you already have, you can add it to the field. But if you try to plant a third type of bean, you’ll have to uproot one of the other two first.

Once the initial planting is completed, the top two cards of the deck are flipped and the real choices begin. The active player may make any trades he wants with other players at the table. He can plant the cards that were flipped himself, or he can trade them away for more desirable beans. Any beans that are received in play get planted. Once all trades are complete, it’s the next player’s turn.

When a field is harvested, it grants coins based on how many there are in the field and how many in the deck. A cocoa bean requires only two cards to be worth one coin because there are only four in the whole game. With 24 in the game, the wax bean needs four in the field to be worth one coin. Planted beans can be worth up to three coins. And, when harvested, players simply take some of those cards and put them in their score pile. So the deck gets thinner as the game progresses.

Bohnanza is great because it combines two of the best elements in gaming: trading and consequences. Negotiation is always fun. “I’ll give you another Blue Bean for your farm if you send that Stink Bean my way” – and yes, there are stink beans. The flurry of the trading phases and the real time offers are always exciting. But it would be nothing without the consequences.

You see, if the active player doesn’t trade away those two cards of his, then he has to plant them. And if he doesn’t have room for them, he has to prematurely harvest whatever he was working on. This creates an interesting dynamic where the seller wants to sell – sometimes so much that they’ll give away cards for free. But the prudent seller can still extract a good price – especially where two opponents both want the same bean.

But it isn’t just the active player who may want to trade. Since the other players can trade cards from their hands, trading is essentially the only way to get rid of cards and ensure that you won’t be forced to plant something you don’t want to. There’s pressure all around and it can even lead to brinksmanship.

Also, there is definite disparity in trades. Maybe if I give you a Green Bean, it’ll get you enough to bump up your harvest by a coin. If you need eight for a second coin, then getting that eighth card is more valuable than the seventh or the ninth. Taking this into account can be crucial when it comes time to trade.

Then the next player goes and it starts again. The game ends when you’ve gone through the deck three times. And, with more and more cards out of the deck representing points, the deck goes quicker and quicker. At game end, the player with the most coins wins.

Bohnanza reliably provides a good time no matter the audience. It works well with families assuming that the children are old enough to grasp valuation and have some negotiating skills, which all kids tend to be born with. The process is simple and accessible: plant, trade, next turn. But the trading keeps everyone involved on every turn. There is rarely an opportunity for anyone to get distracted by a digital device between turns.

But it’s not just for families. Gamers can really get into the trading portion of it – treating it almost like an auction of the two cards each round. And, when looking at whether this particular bean will get the player to the next threshold of points, the disparity in value can result in some trades of 2 for 1 or more.

Bohnanza is enjoyable and works for multiple crowds. While I think it wouldn’t often be the main event of a gamer’s game night, it nevertheless would come out from time to time and may even be a go-to game for casuals and mixed groups looking for an appealing, easy to teach and learn card game with some novel mechanics and a silly concept.