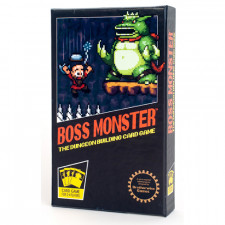 Boss Monster, the debut title from indie publisher Brotherwise Games, seats players in the thrones of NES end bosses, those 8-bit nuisances lurking at the end of every pixellated dungeon. And like those cartridge-based antiheroes, Boss Monster has been tragically misunderstood.

Some of the things you may have heard are true. Filled to the brim with charmingly authentic pixel art and retro referencesâ€”not just to classic video games, but also to D&D, Magic: The Gathering, Harry Potter and The Princess Brideâ€”Boss Monster is quick and accessible, although its rulebook makes things seem more complicated than they actually are. Youâ€™d call it a filler game If you subscribe to these kinds of labels. Despite its Magic references and CCG-like appearance, it's a lot closer in feel to something like Citadels.

Like Citadels, there's some real depth behind the simple mechanisms, although luck will never disappear completely. It'll take multiple plays and some lateral thinking to find it, like a hidden warp whistle, and you'll need to resist the urge to eject the cartridge or plug in your House Rules Genie when you first discover that Boss Monster is not exactly the game you wanted it to be.

It calls itself a "dungeon building card game," but you won't come away from Boss Monster feeling like you've built your own deathtrap dungeon. At heart, when you strip away the chrome, Boss Monster is a bidding game. The prizes up for bid are the heroes who show up in town at the start of every round, and the currency is the four types of treasure icons that appear on every room you play. Each hero is drawn to the dungeon that houses the most of his favored treasure: swords for fighters, loot for thieves, magic books for mages, and holy relics for clerics. If two players tie, the hero loiters in town until that tie gets broken.

The other features of these room cards add depth to the bidding process, but the hero auction remains the soul of the game. Ignore it at your peril. The player who best controls this bidding phase will win the game every time.

The extra depth comes from the unique abilities and damage values of these treasure-bearing rooms. Damage, the simplest concept to understand, gives Boss Monster its unique pacing. Besides her favorite treasure, each hero has a health value, usually between four and 13, with the deck stacked so that higher-level "epic" heroes come out later in the game. Whenever a hero passes through a room in your dungeon, you subtract that room's damage value from the hero's health. If you reduce his health to zero, you score the hero as a soul, but if the hero survives the gauntlet and makes it to your boss chamber, you must take the hero as a wound. Ten souls wins you the game, but five wounds knocks you out of the running.

Before the first heroes show up, each player can build one room; after that, the players build one room per round after the new heroes are revealed, up to a maximum dungeon size of five rooms. With each room typically dealing one to two damage, that means the first round or two of bidding is actually an anti-auction: you want to send the heroes to your opponents so that they can cause a wound. A few rounds in, when your dungeon gets up to speed, the focus shifts to bringing heroes to your door, and it remains that way until the epic heroes come out, typically heralding the end of the game. Besides their higher health values, epic heroes double the rewards and penalties, nicely accelerating the game while forcing you to squeeze every drop of damage from your dungeon.

With a maximum dungeon size of five rooms you'll never kill the 11- or 13-health heroes with the damage value alone. That's where the special abilities come into play. The best rooms give you powerful abilities like extra card draws or "healing" wounds into souls, but you'll need to arrange things so that the hero's HP runs out in that specific room. Other abilities can boost the damage of nearby rooms or allow you to destroy a room in your dungeon for a big chunk of damage to a single hero.

Abilities are usually thematic: the Dizzy-Gas Hallway boosts the damage of the trap room that comes after it, the Goblin Armory boosts neighboring monster rooms, and the Minotaur's Maze forces heroes to go back to the previous room a second time. They're also themed to match their treasure type, so loot-bearing rooms tend to be full of traps (think Indiana Jones), sword rooms house high-damage monsters, mage rooms let you draw one-time-use spell cards, and holy relic rooms allow you to "resurrect" cards from the discard pile.

Remember, though, that the perfect hero-destroying dungeon will be worthless if you can't actually get the heroes into it. It's this delicate balance that makes the game work: you need to specialize to kill the heroes, but you need to generalize to win the bids. You can never get too attached to a specific floor planâ€”the only thing that matters is to have the best dungeon for this round, and to repeat that miracle every round. Control is key- if you aren't building rooms that put more cards in your hand, you're severely limiting your ability to react to changing hero rosters. The claustrophobic room limit enhances this subtlety, since you can't just keep building bigger and bigger. And order matters; you can build over previous rooms or even destroy them for special abilities, but you can never play a new room in between existing ones.

It's not the deepest dungeon, but it's fun. It's small, quick, and easy to teach, the perfect backpack game for chillin' like a villain.