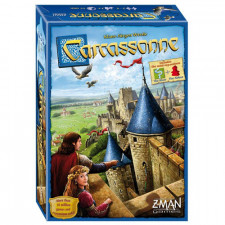 Carcassonne is a liar. The quaint, inoffensive Doris Matthaus art on my old, tattered game box beckons the poor, ignorant newbie. It promises a quiet game of erecting cities and laying new roads along which happy little meeples will go about their productive little days. But a few minutes into the game, the ugly truth is laid bare. The newbie looks crestfallen- â€œBut if you place that tile there, Iâ€™ll never finish my cityâ€¦â€ or â€œbut if you put that road there, my farmer is totally uselessâ€¦â€ Do not let the cutesy art fool you. With the right playgroup, Carcassonne is a cutthroat, vicious test of opportunistic tactics and long-term strategy. Yet somehow the game also has players almost unknowingly working alongside one another to stitch together a landscape that is uniquely their own.

The rules are not rocket science: play a tile, maybe claim a feature with a meeple, score anything youâ€™ve finished, and pass to the next player. Roads are low-risk, low-reward endeavors, while cities are tougher to complete but worth a bunch more at the end. The farms are the only snag in the simple rule set, since new players can take a game or two to grasp how they are scored at the end of play. At its core, itâ€™s a game of both strategic tile placement and careful resource management, as players will have to balance the need to stop or horn in on other playersâ€™ developments with the desire to garner points during play as well as in the endgame scoring.

Many modern family-friendly designs have made an effort to soften any confrontation within the system. Those who are lagging behind are offered handicaps and catch-up mechanisms, while those who are in the lead are gently pulled back for the sake of equality and keeping everyone competitive through the end. Carcassonne could not be more at odds with these types of games. It is not uncommon for players to lap those bringing up the rear a time or two over the course of a game. Itâ€™s totally refreshing in an age of tiny score spreads and feel-good victory points doled out to everyone to truly earn a victory, or try earnestly and fail hard.

Some people recommend using a variant with a hand of tiles to soothe the pain of the cold, hard tile draw. Do not play with these people. The entire point of Carcassonne is to cleverly, carefully, aggressively place your tiles such that every tile you draw in the late game is beneficial to you, and every tile your opponent draws doesnâ€™t help him at all. The sheer, unforgiving brutality of it all is wonderful. If you find yourself groaning at every tile draw, you have already lost. You must make your own luck in Carcassonne, or youâ€™ll lose badly every time.

There are many, many expansions available, but none are necessary. The two best modules, Inns and Cathedrals and Traders and Builders, add some elements of risk, new meeple types, extra player pieces, and new sets of resources to trade in for points. They are okay for a change of pace on occasion. But since most of the expansions add more tiles to the mix, they almost invariably lengthen the game from its perfect 45-minute playtime to something that drags on well past its welcome. Iâ€™ll take plain old vanilla Carcassonne 95% of the time, please and thank you.

While the game is probably at its best with two or maybe three competitive players, it does scale up to five in the base game nicely. Itâ€™s more chaotic to be sure, but with the chaos comes the opportunity for devilish diplomacy. Crafty players will be able to point out moves that will benefit them as well as the active player, while those with a big city ripe for blocking will have to beg, plead, and cajole the all-powerful tile holder into placing their tile somewhere else. I absolutely love games that become more than the rules, and the shaky alliances and bitter rivalries of a multiplayer game of Carcassonne are most satisfying.

Yet in spite of this bloody battle among the players, at the end of the game, youâ€™ve built something tangible. You havenâ€™t just put together a little abstract castle on your own isolated game board or optimized a bloated set of subsystems to eke out a victory; youâ€™ve all built a one-of-a-kind landscape as a distinctive expression of the play styles, attitudes, and personalities at the table. Sure, some of the roads donâ€™t go anywhere, and some of the unfinished towns look like a city development gone wrong, perhaps defunded in the middle of construction by a bankrupt township. Youâ€™ll laugh at your poor farmer stuck in a fruitless field or pump your fist in victory over your profitable monasteries in the center of town. After all is said and done, Carcassonne is a great game because you and your worst enemies somehow create something together.

I like Carcassonne because it lets me leave a mark on the progression of the play, and it lets the whole group collectively guide the flow of the game. Carcassonne is not afraid to turn the play over to the players, and let them decide what the strange, distorted, beautiful patchwork of civilization will look like when the dust has settled. There are no scripted multiple paths to victory or obvious openings or endgame plays, just the personalities present to shape the course of the game. Itâ€™s a bold, refreshing design, perhaps even more poignant today than it was on its release fifteen years ago.